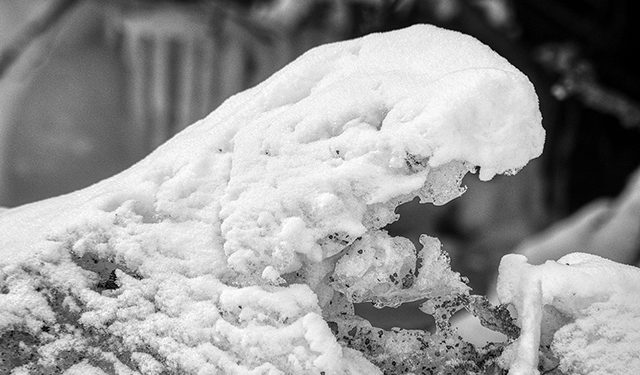 I will get back to writing about the War; something is brewing, but it will take some time. Until then…

This winter has been a devastating one for my wife and I, what with the garage fire mid-January, which cost us an estimated $35,000 in losses, including our 4×4 vehicle and lots of tools. As I have already written, though, the greatest loss to me, which can never be replaced, was my last box of original 35mm negatives and slides from about 25 years of shooting, along with quite a few prints from previously stolen frames. Yes, most of them were scanned and the scans are safe, but the originals are now gone. I had to move on, or let it flatten me. 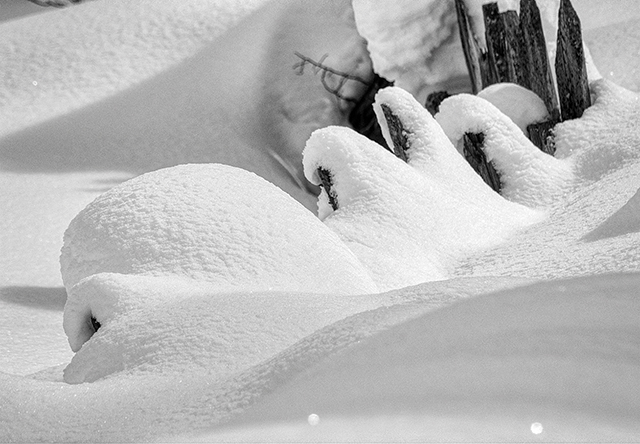 This winter also seems to have been the one which really inspired me in new ways as a photographer, though. Since that fire, I have spent many days out in the snow, mostly with a long zoom lens, seeing new things.
My recent work is almost all in black and white, to pare back landscapes to the basics with no distractions from color. Just tones and forms. Having lived in the same house for 10 years, though, what new things could winter really hold? 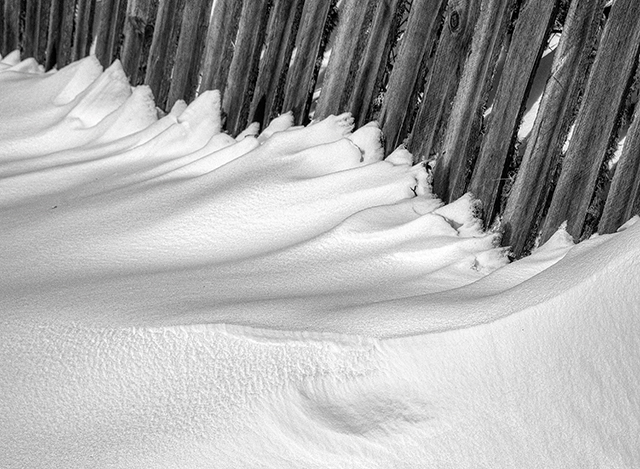 The Ice Dragon tale of the last two articles I wrote has been a kind of catalyst, its human protagonist really me in disguise. I was writing about what I was seeing, the initial Ice Dragons themselves and then their larger snow forms, in whole or in part, everywhere. I don’t even know if those original curved icicles will ever reappear as dragons. The conditions which formed them—snow, temperature, wind, humidity—may have been unique. I have seen curved icicles before, but never like these in my life (which has been mostly in climates with proper winters). I am just glad I saw them and was in a position to photograph their short lives, as by day’s end they were indeed shattered on the ground.

The snow forms I was seeing even before the icicles, though, bring in the idea of a fractal, for which my best personal definition is “made of itself”. Polish-French mathematician Benoit Mandelbrot coined the term “fractal” in the 1970s, from the Latin for “broken”. Fractals are both in mathematics (you can zoom into them literally forever and find more detail) and nature (structures which repeat themselves on may scales, possibly down to the atomic). Trees and other branching forms like the venous systems in us. Clouds. Water running from the largest rivers down to tiny deltas at your feet. Cracks, rust, land or snow textures. Often, when seeing a photograph of a fractal form in nature with nothing in the frame to give away its scale, you may have no idea: is it planet-sized or microscopic? Also, fractals are the most efficient way of packing the most information or detail into the smallest space. I have been a fractal programmer since the early 1990s, and a photographer of natural fractals for longer than that. 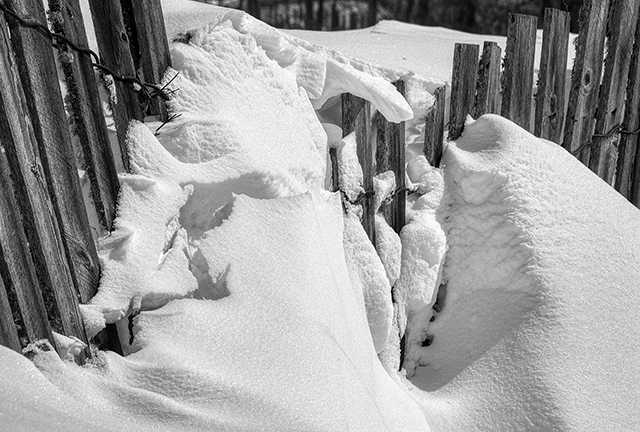 I am also a sculptor, a founding member of the Sculptors’ Association of Alberta in Canada in 1986. True, I have not been active in this art for many years now. But much of what I have seen in this winter’s snow and ice forms has been sculptural, not just textures on flat surfaces but wind-blown forms fully in the round.

So, many of the art forms in which I am or have been active have converged this last winter for me. Photography, fractals, sculpture, writing. Despite the losses, it feels like in this process I am finding some completion as an artist, a unified direction from these fragments joining into a whole. I could not have planned this, so to see it happening is a joy. I am grateful for the art of seeing, really seeing, and for it all pulling together in my head and heart. In this imperfect, currently very messed up world, beauty still exists, and always will. See it!