Internal Georgia, Illiberalism and the Dilemmas of the War in Ukraine 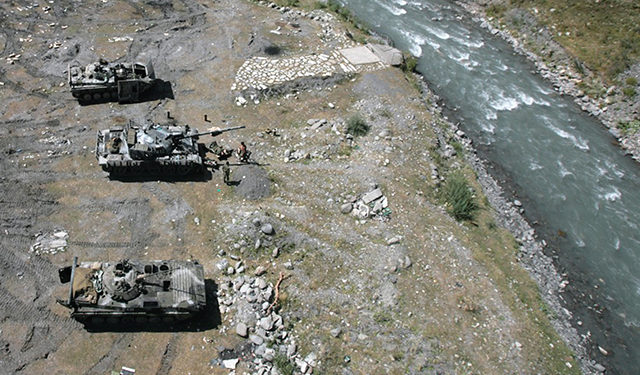 Russian army trucks on a riverbank in Nar, near the border between Russia and Georgia, on Aug. 15, 2008. By Natalia Kolesnikova/AFP via Getty Images

Amid the Russian invasion of Ukraine, what is striking is the lack of attention paid to other theaters of West-Russia competition, and it is in those areas that Russia strives to gain bigger geopolitical benefits.
Russia is unlikely to win the war in Ukraine. Its demands and operations are unsustainable, especially as Moscow is unwilling to make concessions of its own. Perhaps before the invasion, a grand bargain with the West could have been about Russia leaving Donbas along with Abkhazia and South Ossetia in exchange for Tbilisi and Kyiv slowing or entirely renouncing their NATO aspirations.

The attention on Ukraine is Moscow concealing its moves elsewhere, moves which are likely to have a more geopolitical impact. Ukraine is large and important, but Russian demands were not limited to this country. Georgia too features in the calculations. This makes Tbilisi particularly vulnerable to the ongoing struggle between Moscow and the West.

The Kremlin is well aware that it has already lost Ukraine. But smaller Georgia is more likely to fall under its fold. Presently, internal divisions in Georgia are more acute than before. The country politics are traditionally insular, but over the past several years the trend has become starker. The country is also on the verge of re-considering some tenets of its foreign policy. NATO and EU membership will likely remain critical, but Official Tbilisi seems to have a more versatile, more nuanced foreign policy: cooperation with other powers which arm Georgia with more foreign policy tools. In other words, Tbilisi might turn to tactical shifts in its foreign policy where, for example, an exclusive emphasis on the ties with EU might give way to more manoeuvring.

This is far more likely to play out, as there are tensions between Tbilisi and its Western partners because of the slow pace of reforms, inefficient governance, and a growing trend of criticism emanating from the ruling party, Georgian Dream, at the West. Moreover, the illiberal tide is on the rise in Georgia as nationalist groups seem to be gaining ground.

Thus, for Russia, there are a number of congenial developments through which it could exert substantial influence to further isolate Georgia. Though it is popular to think about Moscow’s approach toward Georgia often in military terms, it is more realistic that future steps will be more about diplomacy, gradually limiting Tbilisi’s maneuvrability, using the difficulties it has with the West.

The 3+3 platform is one of those tools, and initiativwhich eaims at including the three South Caucasus states and three Eurasian powers, Iran, Turkey, and Russia, bordering on the region. Regionalism is a strong weapon against those powers which do not border the South Caucasus. Since Georgia is closely aligned with the US and EU, the 3+3 idea is likely to limit its foreign policy. A certain level of exclusion of the West from the region is pursued.

Some elements of measured coercion could be also used. Increased borderization in “South Ossetia,” along with a greater number of kidnappings of Georgian officials are sensitive pressure points where Tbilisi is especially vulnerable.

For Moscow, it is far more efficient to have a government in Georgia which is relatively unstable, without concerted support from the West, and unable to build a long-term foreign policy to advance its national interests. This would make Tbilisi less immune to Russia’s demands and, in the longer term, such a state of affairs would actually cost Russia less and create even fewer troubles with Tbilisi.

Limited sovereignty is what Russia pursues for its neighbors. Ukraine is an important topic in US-Russia negotiations, but a real loser in this competition could be Georgia. Exposed to Moscow’s ambitions in the region, Tbilisi has limited foreign policy options and even less military and economic power to withstand another attack.