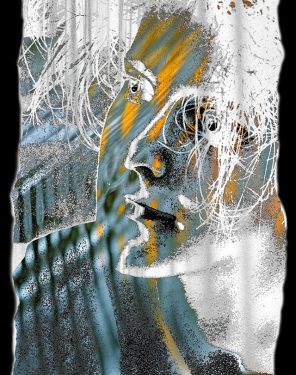 Recently, I have been enjoying looking at online images of the works of one Jerry Uelsmann, b. 1934. An American photographer and master of the art of photomontage in the 20th century, some of his works (which you can see by googling him) are iconic, famous, collected in art museums all over the world, including the Museum of Modern Art in New York. What might be the most astonishing thing about his work, usually mixing two or more images to great surreal effect, is that it was done entirely by hand, in the darkroom, using liquid chemicals and FILM.

I dabbled in black and white developing of 35mm film and printing in my teens and early 20s, given the chance, in Canada and the UK. Color once, too, but it’s much harder as you have to forgo the red safelight which monochrome allows and work in total darkness, by feel alone.

One of the things I experimented with (there were many) is the Sabattier Effect, also known as pseudo-solarization. While your black and white print is still appearing, in the bath of developing liquid, you briefly re-expose it to light, then continue developing it and fixing it in the next bath. The light has the effect of reversing some, but only some, of the print’s tones, and graying out others. You never get exactly the same result twice by hand, though you can get close by measuring all the parameters of brightness, timing, temperature and so on. It can be quite magical, given the right subject, and many much more famous photographers than I have over the decades have played with it. Photo-processing software offers similar results too, but the “wetware” version is incomparable in its slightly chaotic fun.

One of my portrait subjects in 1990 in the south-west UK was a young lady who, at 17, often back-combed her hair and ended up looking quite unusual. I took several sessions of her at a friend’s studio, and solarized some of the results in his darkroom. One of the best is a small print which I still have, about the size of my hand. I have come back to it time and again, adding color and so on

Inspired by Mr. Uelsmann, though not imitating him at all and not even using a darkroom, I have recently been revisiting a high-resolution scan of this little portrait, playing with it onscreen as I have no access to the darkroom anymore. Selecting sets of its tones, and replacing them with textures from my collection of tens of thousands of images from my own decades of work. The results only add more to the image’s unreal qualities, I feel, and I will keep on playing until I have perhaps a large set of alternate versions, each of which I might decide to print only once, to make them unique, just as the original is.

The key seems to be to select textures which don’t detract too much from the original, and also which work together in feel and color. It’s a rewarding exercise, and with such a great body of my own images to play with, there may well be more composite photos of quite other types to emerge soon as well. If the “dead zone” of an early Svaneti winter, with the leaves down and not much if any snow yet to change the landscape, does little to inspire by looking out the window, I can always look inwards instead.