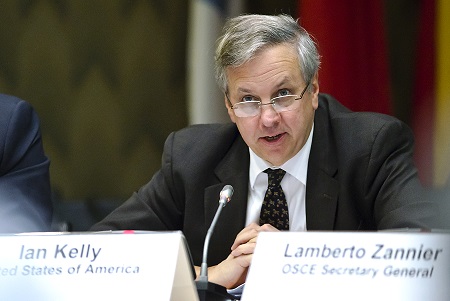 Ian Kelly, the former US Ambassador to Georgia, retweeted a post highlighting the brutality of the Russian invasion and supporting a campaign that seeks to inquire about the atrocities committed by Russia in Abkhazia, Georgia, in the 1990s.

“Georgians stand with Ukrainians because they know the brutality of a Russian invasion. Before Bucha, there was Abkhazia,” Ian Kelly tweeted.

Kelly retweeted a post from Voice of America journalist Ani Chkhikvadze that said, “A campaign that deserves your attention. The Ukrainian war revived the memory of the atrocities in Abkhazia for many in Georgia. The stories of the victims were never told. Please help spread the word.”

Georgians stand with Ukrainians because they know the brutality of a Russian invasion. Before Bucha, there was Abkhazia. https://t.co/5XZmJqQ1S0

‘Forgotten Victims – Before Bucha Was Abkhazia’ is a campaign raising donations to inquire about the acts of barbarity committed by Russia in Georgia in the 1990s. A Ukrainian TV station looking into the Bucha massacre contacted the campaign leaders this spring, reminding them that before Bucha in Ukraine, there was Abkhazia in Georgia.

In contrast to today, when social media makes it possible for the entire world to see the atrocities committed by Russia in Ukraine, Georgia’s situation is distinct, stated the campaign leaders. Without the internet, proof of the heinous atrocities committed by Russia and its proxies in Georgia was hidden in the archives and shelved. The campaign has made the decision to digitize their testimonies and give voice to individuals who endured suffering in silence, in the hopes of preventing other atrocities.