How the War in Ukraine Empowers Kazakhstan 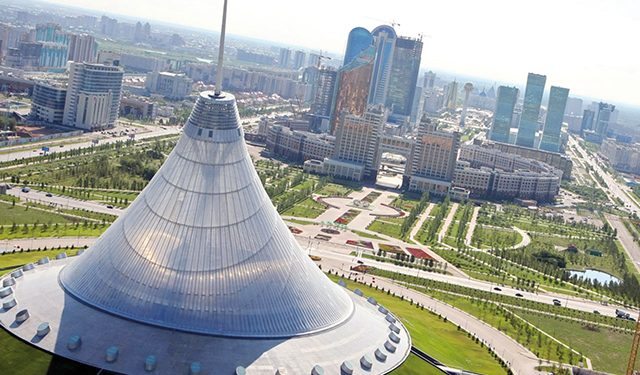 The war in Ukraine gives Kazakhstan much-needed breathing space to ramp up the work to limit its increasingly toxic dependence on Russia. Officially allies and linked together through multiple Russia-led multilateral security and economic groupings, for Kazakhstan, Russia’s increasingly militarist approach to the neighboring states has caused a great deal of discomfort. Russian politicians have pestered Kazakhstan with history lessons on how the country was superficially created and that big chunks of it belong to historic Russia.

Preoccupied in Ukraine, Moscow cannot afford troubles elsewhere along its borders. Its level of tolerance of otherwise unacceptable foreign policy moves has significantly increased the widening of scope of Kazakhstan’s maneuvrability.

That said, when Bolat Akchulakov, the energy minister of Kazakhstan, said that his country will not be joining a gas union, an initiative President Vladimir Putin suggested to set up together with Kazakhstan and Uzbekistan, Moscow could do little to force a change on Astana.

But Kazakhstan is not only emboldened by Russia’s distractions. It has China, which has cash and also serves as a necessary balance to Russia. For Beijing, Kazakhstan is a critical artery within China’s sprawling yet struggling Belt and Road Initiative (BRI), and serves as a gateway in its push to reshape global connectivity.

China’s interests in Kazakhstan were underscored in a September visit by Chinese President Xi Jinping, who picked Astana as his first foreign travel spot following the covid pandemic. Xi emphasized Beijing’s support for Kazakhstan’s independence and vowed to safeguard its territorial integrity. The message was seen as a warning to non-regional actors, but the veiled style and specific timing of the statement might suggest that it was also meant for Russia.

Astana’s reliance on China currently appears to be advantageous. Indeed, the two nations are increasing their railway links in order to increase transit and bilateral trade. However, the line between benign dependence and toxic partnership is always perilously thin. Kazakhstan is aware of this, which is why the country chooses to diversify its foreign ties by developing connections with other ambitious Eurasian actors rather than being a part of the Russo-Sino condominium.

Turkey is an important player in these initiatives. Ties with Ankara are strengthening, as seen by Turkish President Recep Tayyip Erdogan’s recent visit to Astana, which in turn was built on Tokayev’s much-touted trip to Ankara in May 2022. Both visits emphasized the significance of the expanding commercial and political connections, as well as the Middle Corridor itself, which has now turned into a viable alternative to the Russian route, partially blocked due to sanctions. Indeed, the developing Middle Corridor is a vital component of Kazakhstan’s new vision. During the Ukraine conflict, Russia intermittently closed oil exporting pipelines, prompting Tokayev to order the search for alternate routes.

Kazakhstan looks even further west toward the European Union, which, despite open competition with Russia, has been particularly keen on forging tight connections with Kazakhstan. During his visit to Kazakhstan, Charles Michel stated that bilateral ties are improving and are founded on trust and mutual understanding. Josep Borrell, the EU High Representative for Foreign Policy, also visited Astana on November 16-17, unveiling ambitious EU plans to re-engage Central Asia as a whole and Kazakhstan in particular.

Eastward and southward, Kazakhstan reaches out to Japan, South Korea, and India. These three powers have been less ambitious in Central Asia than Russia and China, but their appetite is growing as they seek ways to deny Russia and China building a condominium over Central Asia.

Yet Kazakhstan’s multi-vector foreign strategy does not imply that it is rethinking its relations with Russia. Astana just desires more assurances in bilateral relations. More security is provided by the capacity to pit one power against the other. In fact, the Kazakh leadership knows full well that Moscow requires Astana’s cooperation too. This explains why Tokayev has worked so hard to maintain stable ties with Moscow. Meetings with Russian leadership are taking place on a regular basis, with Putin and Tokayev meeting in August in Sochi.

Thus, the war in Ukraine has served as perfect timing for what Kazakhstan sought to do for a long time: a new foreign policy, which seeks greater freedom from Russia and engagement with large actors across Eurasia. Russia is not losing only Ukraine; it also depletes the remnants of its erstwhile influence in Central Asia.