How Following in Dubai’s Footsteps Could Reap Dividends for Tbilisi 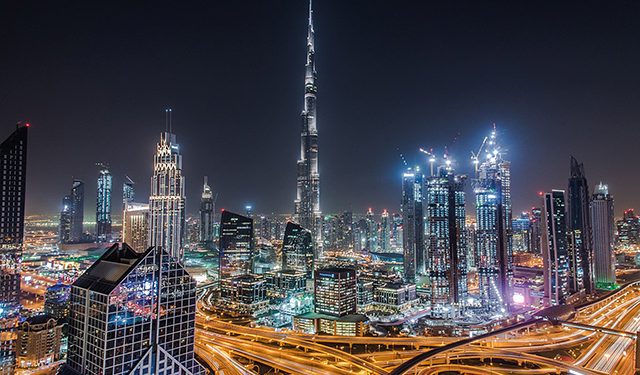 Image by Ivan Siarbolin, via Wikipedia

It is high time Georgia’s vibrant capital raised awareness of its liveability rather than simply pitching itself as a tourist hotspot. Anyone visiting Tbilisi for the first time cannot help but marvel at how picturesque it is from virtually every angle. A harmonious mosaic of the old town’s quaint houses atop one another and mountainous backdrop impeccably dovetail the modernist architecture in more upscale neighborhoods.

There is seldom a dull moment in this bustling metropolis that plays host to a perceptibly youthful and outward-looking population. From peaceful demonstrations erupting at the drop of a hat to street musicians plying their trade well into the night along its ornately lit up thoroughfares, the city is constantly abuzz with effervescent natives living in the moment and taking each day as it comes. In spite of being detached from the mainland, Tbilisi could easily give most European cultural capitals a run for their money owing to its rich gastronomic scene, historical significance, artistic flair and abundant urban green spaces.

By virtue of its strategic location between East and West, Tbilisi is far more cosmopolitan than one would imagine. Admittedly, the plurality of ethnicities as well as languages spoken is largely down to Georgia being among the most sought-after destinations for leisure and recreation in the post-Soviet space. That said, foreigners are starting to relocate there lock, stock and barrel. By no means is the famous proverb “every guest is a gift from God” merely a hollow catchphrase thrown around for good measure. This attitude is deeply ingrained in the hearts and minds of most Georgians, who treat outsiders as one of their own and ensure they are fully immersed into the local way of life. Unlike parts of Western Europe where multiculturalism has fostered parallel societies and fifth columns, Georgia harnesses the crucial know-how newcomers bring, and celebrates the extent to which its demographic landscape is enriched by their presence.

Tbilisi’s success story, in the realm of tourism and trade alike, is not too dissimilar to that of Dubai. Once an impoverished backwater with very little in the way of natural resources or eye-catching attractions, the glitzy city-state quickly morphed into the Gulf’s de facto financial hub, drawing millions of visitors on an annual basis thanks to lax entry requirements, extensive air connectivity, unparalleled safety and world-class amenities. However, what truly sets Dubai apart is that it is not merely a weekend getaway, but a home away from home for many overseas high-net-worth individuals (HNWIs). The UAE has capitalized full throttle on its touristic allure by going a step further and paving the way for long-term settlement via their much-vaunted Golden Visa scheme. Bolstering non-oil industries such as hospitality, financial services, real estate, as well as entertainment, is part and parcel of rendering Dubai a modern-day El Dorado for ambitious émigrés who fancy their chances of making it big in an inherently pro-business jurisdiction.

Meanwhile, the Georgian authorities appear to have contented themselves with the windfall generated from holidaymakers and have stopped short of attracting deep-pocketed second home seekers to their country. In many ways, Tbilisi is on an equally promising trajectory as Dubai in its heyday. State-of-the-art shopping malls and luxury hotels are ubiquitous nowadays, while futuristic buildings and business districts can be found in certain pockets of the capital. Banking in Georgia is highly sophisticated, while tax rules for company founders are quite relaxed so as to propel entrepreneurship. If anything, Tbilisi boasts numerous pull factors that give it an edge over Dubai for the purpose of residence – namely, a self-sufficient economy as opposed to one that is wholly expat-driven, the civil liberties its inhabitants enjoy, a comparatively favorable climate conducive to spending time outdoors all year round, and a non-draconian legal system underpinned by the presumption of innocence.

Peace through trade
It is no coincidence that Dubai has come to be known as a sanctuary in a region widely dubbed the world’s powder keg. Much like Georgia’s adversarial relationship with Russia, bilateral tensions have long been brewing between the UAE and Iran over occupied territories and the latter’s interventionalist proclivity throughout the Persian Gulf. Fortunately, however, any ongoing disagreements have been duly nipped in the bud and never escalated into all-out military confrontation. Mindful of the one-sided nature of any potential conflict, the Emiratis have chosen to pursue a pragmatic yet shrewd foreign policy outreach vis-à-vis Iran which prioritizes mercantilism above all else. Dubai, in particular, has seen to it that the heavily-sanctioned Islamic Republic is not totally cut off from the international community. Granted, the sheikhdom’s soft spot for Tehran has occasionally landed it in hot water with Western allies vying for regime change therein. Nonetheless, the net benefit from positioning itself as a conduit between Iran and the outside world far outweighs any reputational costs incurred from this alleged self-serving endeavor.

Monetary gains aside, guaranteeing unprecedented stability in a country where guest workers constitute the lion’s share of residents is reason enough to stay the course.

Far from being a gesture of appeasement or submission towards its vastly more powerful and populous neighbor, extending a helping hand to the Iranians during the height of the maximum pressure campaign has incidentally kept them at bay all these years. Dubai remains the go-to choice for affluent businessmen from Iran who no longer wish to bear the brunt of their government’s pariah status and hardline policies.

Similarly, senior IRGC officials routinely funnel their ill-gotten-gains though Dubai and transact with third-country entities through household Iranian banks like Melli and Saderat that have a strong footprint there. Needless to say, stringent checks and balances are in place for Iranian professionals looking to take up full-time employment in the UAE – the majority of whom are denied work permits on suspicion of espionage. Furthermore, Emiratis of Persian descent are often demonized for speaking Farsi and barred from applying for prestigious public sector roles. Yet, the fact that Abu Dhabi is Iran’s second largest trading partner means that the Ayatollahs would have much to lose from launch a Russian-style incursion into the UAE amid the buildup of US troops across the GCC and their overt displeasure with the Abraham Accords.

By the same token, there are telltale signs of a Russo-Georgian reconciliation in the offing as Tbilisi slowly but surely comes to terms with which side its bread is buttered. It is no secret that Russian citizens made a beeline for Georgia when the mobilization drive was first announced back in September, and they are still flocking there en masse even though they are not necessarily met with the warmest of welcomes upon arrival. The war in Ukraine has not only conjured up painful memories of the annexed South Ossetian and Abkhazian territories, but reminded the people of Georgia that they are still not entirely out of the woods. Be that as it may, there is a growing realization that the Kremlin’s undue aggression and crimes against humanity are not representative of the Russian population at large. To their credit, ordinary Georgians have stuck to their guns in extending the same degree of hospitality to incoming Russians as with any other nationality. In turn, Russia’s foreign ministry has signalled its willingness to establish visa-free travel for nationals of Georgia and resume direct flights between Tbilisi and Moscow in the near future. Rather than pinning their hopes squarely on joining the so-called “European Family” and turning their backs on the rest of the world, the Caucasian country ought to emulate the “zero problems” strategy that the UAE has embarked on as a means of performing a balancing act between partners and foes alike.

It is worth highlighting that Georgia has undergone an economic boom of late while the rest of Europe reels from energy insecurity and a cost of living crisis. Worse still, the European Union continues to keep both the Eastern Partnership (EaP) nations and the Western Balkans at arm’s length under the guise of failure to tackle corruption. The prospect of accession is proving all but a mirage as more and more preconditions are set forth by Brussels over and above the already unreasonable concessions extracted from candidate countries. Attracting sizeable foreign direct investment (FDI) from other geographies, including Russia and the Middle East, could be Georgia’s meal ticket to EU membership. As things stand, the main stumbling block to expansion is the bloc’s apprehension of an uncontrolled brain drain from peripheral states. Should the Georgians succeed in generating enough organic capital to foster adequate job creation domestically and wean themselves off funding from the European Central Bank (ECB), they will almost certainly emerge as a frontrunner for integration. Launching a clear-cut, no-frills pathway to long-term residence for real estate investors, akin to the program championed by the UAE, is arguably the most logical starting point to bring the increasingly skeptical Eurocrats back to the negotiating table.