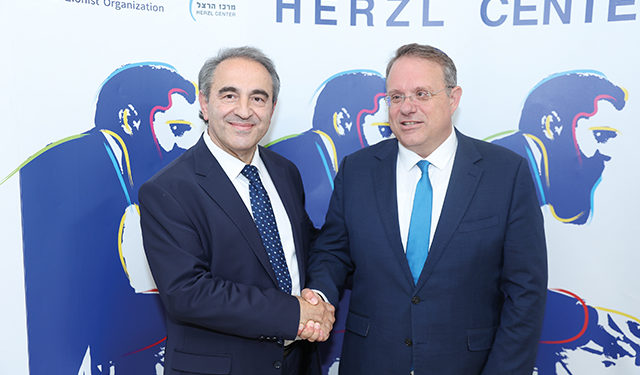 Israeli House on January 27 celebrated International Holocaust Remembrance Day. The event was held in the Great Hall of the National Parliamentary Library of Georgia. Representatives of Georgian society, students, university professors, representatives of the Jewish community and the civil sector, participated.

They were welcomed from the Israeli side by the Chairman of the Jewish Agency (Sokhnut) and the Head of the World Zionist Organization, Yaakov Hagoel, who thanked Georgia for their solidarity to the Jewish people, and named the activities of Israeli House in public diplomacy “very important.”

It is noteworthy that the Jewish Agency (Sokhnut) has been playing a leading role in the history of Israel for almost a century. Before the creation of the new state, it had the function of government, although even after 1948, it played an important role in the consolidation of the Jews. The contribution of the World Zionist Organization to the history of modern Israel is no less.

That is why the address of the head of these two influential organizations on Holocaust Remembrance Day was something of a historic event.

“From Jerusalem, the eternal capital of the Jews, thank you, the Georgian people, for your solidarity to the Jewish nation and Israel,” Hagoel noted. “We address you from the building where the first government of Israel worked, and, today, on International Holocaust Remembrance Day, we remember the 6 million Jews who were killed for just one crime – being Jews. We must remember this horrific event in the history of Mankind every day, every hour, and learn what scale of disaster we are dealing with.

“I will also highlight the very important activities of Israeli House in Hasbara – in the direction of public diplomacy, which means supporting Israel and world Jewry and promoting Georgian-Israeli relations.

“I would like to thank my close friend Mr. Itsik Moshe for his 32 years of significant and tireless work for Israel since he became the first representative of our World Jewish Agency in the Soviet Union. It means so much to Israel, and connects Israel with friendly countries. I wish you good luck,” Hagoel concluded.

The tragedy of the Holocaust, the importance of international solidarity, and the deepening of Georgia’s ties with the Jewish world and Israel are among the topics that have become the focus of the 32-year work of the Head of the “Israeli House”, Itsik Moshe.

Itsik Moshe, starting from 1989, as the first official representative of Sokhnut in the Soviet Union, began to create a platform for Israeli relations with the countries, on the implementation of which Israeli House has been working for years. Through public diplomacy, it shares true Israel and world Jewry in friendly countries and promotes bilateral ties. 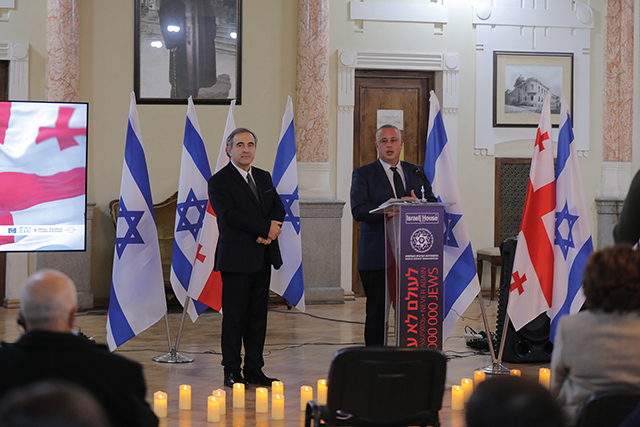 As Moshe noted at the event, the Holocaust must not only be remembered, it is a tragedy to push us towards peaceful coexistence and friendly relations between peoples and countries. This is one of the cornerstones of the Israeli House concept, which has the full support of Israel and influential international organizations. It is as a result of such activities that Israeli House has become a leading figure in the Israeli political spectrum, the European Association for the Preservation and Promotion of Jewish Culture and Heritage (AEPJ), the World Zionist Organization, European Parliamentary Union “European Alliance for Israel” (EAI), and others.

Itsik Moshe also spoke about the success achieved at the UN, according to which the UN considers the non-recognition of the Holocaust a crime.

The memorial evening was attended by David Bitan, a member of the Knesset from Israel, the head of the friendship group with Georgia, and a lobbyist for World Jews in the Knesset. He greeted the participants of the event and called the annual celebration of this day in Georgia organized by Israeli House “a great human act.”

Former Deputy Speaker of the Knesset, Hilik Bar, who came to Tbilisi especially for this day, also addressed the audience. According to Bar, today, as per traditional, the voice of Georgia has once again joined the voice of the civilized world, which unanimously condemns the great tragedy of the Holocaust, and the persecution and destruction of people on ethnic or other grounds. The Jewish people appreciate the merits of the Georgians who saved the Jews from death during the difficult years of the Holocaust.

It is noteworthy that with the initiative or support of Israeli House, the history of the Holocaust is being taught in four Georgian universities, Israeli cabinets have been opened, and a monument to the victims of the Holocaust and Georgian Schindler, Sergi Metreveli, has been erected in Oni. With the initiative and significant support of the MP of the Municipality of Samgori, Revaz Sokhadze, Tbilisi City Hall set up “Israeli Park” in the capital, with the support of Israeli House a picture of Anne Frank has been drawn and in May of the current year Memorial of the victims of the Holocaust and Georgian Schndlers will be placed in Tbilisi. Under the leadership of the organization, an unprecedented number of representatives of the Knesset and world Jewry visit Tbilisi every year.

Among the Israeli House’s upcoming plans is a forum against Anti-Semitism to be held in Jerusalem in March; With partner organization the Israel-Georgia Chamber of Business to participate in the London Business Forum on March 14, where one of the main topics is cooperation with Georgia; Under the auspices of the President of Israel and co-organized by Israeli House, April 27 marks Holocaust Remembrance Day in Albania. Further, a memorial to the victims of the Holocaust will be erected in Tbilisi. With the participation of Israeli House, a memorial will be erected in Israel in memory of the Babiar victims and the “Righteous Gentiles” (Hassidei Umot Haolam). Representatives of 10 countries, including the Government of Georgia, will be invited to the event.

Israeli House recently received further international recognition. Itsik Moshe was elected Vice-President of the European Alliance for Israel (EAI), and Israeli House became a member of the board.

Further, the European Association for the Preservation and Promotion of Jewish Cultural Heritage (AEPJ) within the Council of Europe has offered Israeli House membership on the board. The issue will be resolved at the next meeting in Paris in the coming days. At the suggestion of the Ministry of Culture of Georgia and under the auspices of the Council of Europe, the Jewish Cultural Heritage Route in Georgia is being successfully implemented under the supervision of Israeli House.

According to Itsik Moshe, such multifaceted activities are the future of large-scale bilateral relations and he says he looks forward to the development of closer relations between Georgia, Israel and world Jewry.