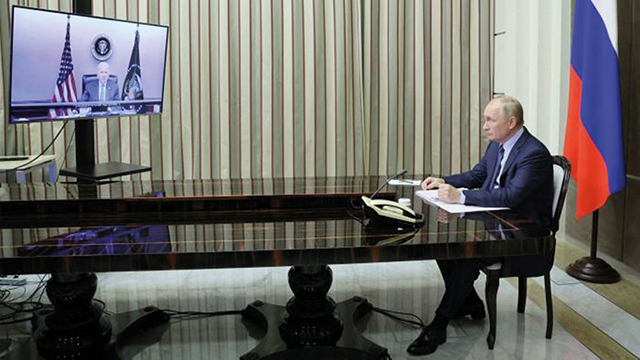 Russia’s President Vladimir Putin in Sochi during a video call with US President Joe Biden. By Mikhail Metzel/SPUTNIK/AFP/Getty

Constant threats from Russia on the border, disinformation campaigns, lack of an effective reaction from the West – this is not a complete list of problems Ukraine is struggling with right now, a list which threatens not just them, but the security of the whole region. This month, President of Belarus Alexander Lukashenko stated that Crimea legally belongs to Russia. Before that, the President of Ukraine, Volodymyr Zelenskyy, held a press conference saying that Russian “representatives” are planning a coup d’etat. How serious are these latest developments and what should be done in the face of the Russian aggression? Director of Security Programs at the Foreign Policy Council “Ukrainian Prism,” and Editor-in-Chief at “UA: Ukraine Analytica,” Hanna Shelest, discussed these issues with GISP.

Let’s start with yet another Russian troop build-up that once again sparks fears of an invasion. How serious is the threat at the moment?

It is indeed very serious. It started in April with the first wave when Ukraine tried to attract the attention of the international community, and the second wave is happening now. We see these forces, they are reported by the international partners of Ukraine, by the Ukrainian Intelligence, but the Russians are not troubling themselves to hide anymore, so in this way it is very serious. The question is what is the reason – just to pressure, to show up, to flex their muscles, or really to attack? That is still the question to which, it seems to me, neither the US nor the Ukrainian Intelligence are ready to answer.

Lukashenko stated that Crimea is legally Russian and he will visit it with Putin. What kind of international response do you think this will get? In your opinion, is there a chance Belarus will also say the same about Abkhazia and “South Ossetia”?

We understand that the Lukashenko rhetoric is becoming more and more outrageous. The international community is responding by non-recognition of him and by introducing sanctions. I think the situation with Abkhazia and South Ossetia is different, as the Russian Federation has not annexed them.

There are fears that Crimea won’t be the last Ukrainian piece of land the Kremlin will try to snatch away. Just how far do you think Putin is prepared to go?

Let’s be honest, we know perfectly well that, for Putin, the dissolution of the Soviet Union was the biggest tragedy. So, for him, the bringing back of all the lost soviet territory is important. The question is, how is he going to do it? He understands that annexation might not be the way to do it anymore. Crimea is the only case- even Abkhazia and so-called South Ossetia have not been annexed. Transnistria several times asked to join the Russian Federation, but Russia has yet to agree, because for them it’s extremely important to politically control these territories. Incorporating the territories means being able to control that the countries themselves pay. He understands that he’s not ready to take responsibility for everybody. It’s always better to have local proxies who are pro-Russian, who will act as he would in bilateral relations or in the international arena, rather than bringing these territories as additional regions to the Russian Federation.

How should Ukraine and Georgia collaborate when facing Russian aggression? Should they reinforce their collaboration now, as they are both victims?

If we take the last several years of the bilateral relations, it’s very interesting how we collaborated in waves. In 2008, you may remember how the Ukrainian President immediately came in with the full support of Ukraine. In 2014, Ukraine made the mistake of presenting the Ukrainian case as a unique one, meaning it was not uniting efforts with Georgia and Moldova, not emphasizing that it was a pattern of Russian behavior, that Russia was not only against Ukraine. By 2018, we had understood our mistake, we had top-level visits, we signed strategic partnership agreements, we started presenting with a single voice our position in the UN, OSCE, Council of Europe, NATO. It was very important, and we saw how foreign partners took it positively, as they realized that it was not only a single case.

What are the main factors that Russia is threatening Europe with? Do you think the EU is acting more passively in the face of Russia’s actions than it should, even with consideration of its own security?

We have the institutional level and we have the individual countries’ level. We understand that it is a consensus decision, and it is very difficult to persuade countries like Portugal that they should care about Russia- they have other problems. However, let’s be honest, as soon as a country feels direct actions against them, they start paying attention. The UK became pro-Ukrainian after Salisbury; countries like Poland are so active because they feel personally what it means; for Germany, it depends which camp you’re from, you can be more or less sensitive towards these issues. Now Spain became interested, unlike several months ago. So, at the individual level, it is very important to work with these countries, for them to understand what their vulnerabilities are. It seems to me that the cyberattack against European countries really had an effect, as did provocations against their ships during different exercises. The energy pressure we had within the last months also influenced some countries’ perceptions; information campaigns during the elections really had an impact; and the spy scandals. When we’re working with the EU, it’s important not just to demonstrate that we are victims, but to show that it is about their security as well.

What are the factors that some of Russia’s propaganda “tricks” use to have the Kremlin’s interests met and to get the desired responses from the international community?

Church affairs is a huge issue where Russia spreads a lot of propaganda, for example, when Ukraine started the process of gaining an independent Church. The second is anti-Western sentiments, all these anti-Soros, anti-vaccination, anti-West, anti-International Monetary Fund or World Bank financial institutions; anti-US, and anti-EU are very strong on their agenda. Most of these messages are alike throughout the region. For example, let’s remember the “American labs created the virus” narrative that we had when the pandemic started – we found exactly the same wording in Georgia, Ukraine and Moldova. It was like a copy-paste. The same with anti-Soros narratives, and the narrative “they want to control our governments”, etc. All these narratives are the same.

And Russian propaganda works with “traditional values”, the gender issue, for example, and LGBT rights; they are behind a lot of campaigns that prevent the spread of gender rights. For them, traditional family is not just the issue of a man and woman, but is also about the suppression of woman.

Regarding NATO, in Ukraine, Russia is portraying itself as so strong that NATO will never be able protect it; that if Russia was to attack, in just two hours they would be in Kyiv. So, they don’t try to show that they are weak or a victim, they are trying to show that they are a global power everybody should respect and that NATO is a “nobody,” targeting pro-NATO sentiments. It also cultivates pro-Russian ideas that “oh, you need to compromise with Russia”, because you certainly won’t be able to fight them.