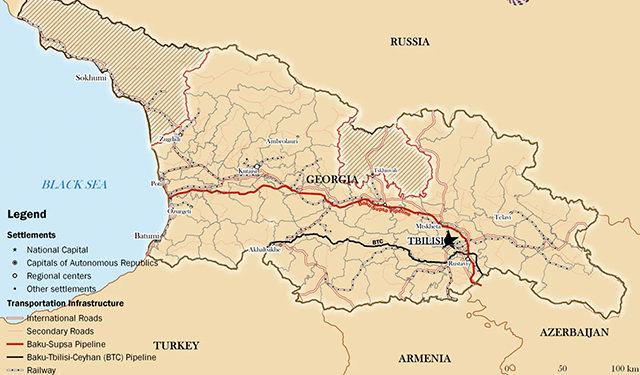 The new generations are coming of age, forfeiting the acute sense of lost lands, their mindset gradually numbing towards the anguish of those that came before them. Source: ponarseurasia.org

Anything good and useful that is currently happening in Georgia is losing its color and value against the background of the Occupation that we have been suffering from the last 30 something years. I am purposefully capitalizing the word ‘Occupation,’ because it has turned into the most capital issue Georgia has had to handle in its recent history.

The fact of losing Abkhazia and Samachablo is absolutely indigestible for every single Georgian of any age, gender or faith. We are simply not capable of putting up with the reality that life offers at this stage of our existence. We sleep and dream of these lands coming back to us, but we have not the slightest clue how to actually do it: no plan, no power, no will, no resource, no hope, no nothing!

The world around us is aware of our pain, but the same world needs to do so much to ensure its own survival, that it has no will or muscle to turn our territorial issue into its core subject of care and preoccupation. Without an iota of exaggeration, our life is losing gist and taste because of the Occupation imposed on us by our northern neighbor only thanks to the power it is allowed to exercise over us.

Russia is angry with Georgia, and its anger is fierce and lasting, and there is no way to assuage that anger because, naturally, Russians honor in the first place their own state and political interests above others’. Georgia became the ‘other’ for Russia as a result of Georgia’s decision to follow the western moral and political ideals, and its ability to make a human being happier than Russians can and would any time soon. To play a double game, including Georgia’s goodwill gestures towards both, seems to be practically impossible, because Russia tends to maintain a categorical attitude: either us or them. Living in a presumable triangle between Russia, Georgia and the West has not worked, although this geopolitical model might have been ideal for Georgia.

Time is passing and the so called ‘new reality’ is crystallizing little by little, turning into a genuine nightmare for us, because the more the world gets used to the irritating status quo, the more impotent we feel ourselves in our ability to revive our territorial integrity. Moreover, the new generations are coming of age, forfeiting the acute sense of lost lands, their mindset gradually numbing towards the anguish of those that came before them.

Concerning the Western shoulder, we certainly have it to cry on, but only in lighter things like strengthening liberal democracy and honing our electoral culture. We should in no way be nursing the hope that the West is capable of having Russia return to Georgia its lost lands: it can only implement the policy of that loud label, ‘non-recognition’. Non-recognition is fine, but it is only a piece of moderate diplomacy, having no problem-solving strength or value. And everybody knows that! Only, the overall picture stays on a shoulder-shrugging and lip-curving level. Not hard to understand, because, to put it straight, our beloved West has no power to make Russia drop Abkhazia and South Ossetia like a hot potato at one snap of a finger, have the happy Armenian immigrants out and the miserable Georgian refugees in, reinstating their illegally lost properties, and closing the issue forever. Things just don’t happen that way.

Wars change things, sometimes so badly that recovery becomes impossible, and we are the victims of that change. In our hearts and minds, we are not prepared to reconcile ourselves with the fact, but we will have to find better ways to put back together our beloved motherland. Dreaming never hurts, and I will now follow one of the images of my best imagination: some day in the future, the world will not need borders, and that’s exactly when we will be able to relax and ignore the consequences of wars and borderization, visas and other restrictions, territorial quarrels and barbed wire installations. Wouldn’t this be something? I know that jokes are irrelevant about things like occupation and geopolitically broken hearts, but can’t we at least afford this little jovial moment when pain stays and has no intention to go?