Georgian Dream MP Giorgi Khelashvili on the Accusations against Them

I think, there is this growing awareness of the fact that delaying the membership for Georgia, either in NATO or in the EU is counterproductive

The interview was recorded on March 19.

The ruling party has had to face many challenges in its 10 years of power, but the ongoing Russo-Ukrainian war hit them harder. The migrant crisis, joining the sanctions, the EU candidate status, and, of course, the role of the opposition – These were the key issues, GEORGIA TODAY asked Giorgi Khelashvili, an MP from the Georgian Dream faction and Deputy Chair of the Foreign Relations Committee.

We welcomed 25,000 Russian and Belarussian people since the beginning of the war. How many Ukrainian refugees did Georgia accept?

I think 25,000 is an overblown and exaggerated number. I don’t follow these things on a daily basis or know the statistics, but what I heard is that this is a natural, average inflow of tourists. There were some speculations by the opposition about the increased security risks of this inflow of visitors from Russia and Belarus, but as far as I know from our agencies, who are dealing with this issue, there is no significant near security risk. Of all things, there are up to 20,000  security personnel stationed in Tskhinvali and in Abkhazia as an occupational force, and they represent a danger to Georgia’s independence and territorial integrity, not the few thousands of people who might be potentially discontented with the policies of their president, Putin, and who just crossed into Georgia.

I don’t have an exact number, but we do have Ukrainian refugees. The usual practice is that these refugees usually cross the border with Poland, and then they choose where to go, afterward. The statistics suggest that those of them who have relatives in Georgia opt to come to Georgia. The number of such refugees is not high at the moment, but I expect the number to grow in the future.

Who obliged Prime Minister Garibashvili to say that Georgia would not join the sanctions?

I don’t think it was an obligation. The PM said very plainly what Georgia proceeded to do. It was a simple statement of fact that Georgia has very limited resources to inflict such a measure on Russia that could actually terminate Russian aggression against Ukraine. As it happens very often, this statement was taken out of context and exaggerated and amplified by the opposition media and also in the international press.

Let’s just look at what Georgia is doing to support Ukraine. We are part of the international financial sanctions that are imposed by SWIFT and so on and so on… And you know that Georgia was the initiator, participant, and cosponsor of quite a few international measures in international organizations, from the UN general assembly to the international criminal court to the Council of Europe, and so on, that effectively sanctioned Russia in terms of international law for its behavior against Ukraine. And Georgia did not hesitate to join the international community in condemning as much as possible and emphasizing the need to limit Russian aggression.

It’s quite clear that Georgia can’t afford to join the sanctions, but isn’t “Georgian Dream” responsible for that?

I don’t think that Georgian trade with Russia has grown extraordinarily, quite the opposite – If you look at the most essential part of Georgian’s needs, which is energy security, precisely under the “Georgian Dream”, Georgia dramatically diminished our dependence on Russian energy. The same can be said about many other things. Especially after signing the DCFTA (Deep and Comprehensive Free Trade Area) agreement with the European Union, we are doing our best to reorient Georgian businesses to the European markets. There is one segment that dramatically increased its market in Russia and that’s wine production, which was sanctioned before but then Georgian wine regained the market. The government always encouraged winemakers, precisely because of security risks, to reorient their production to the European market, but it’s a very slow process. It will take ages and ages for Georgian winemakers to find their niche there, explore these markets, and raise awareness about Georgian wine. So, I think many winemakers just opted for the easy way, which was the Russian way. I think this will be a good lesson for them that the easiest doesn’t always mean the most secure.

Avoiding sending volunteer troops to Ukraine was explained by an “inevitable confrontation” with Russia, but asking for membership in the EU is not. Could you explain that? 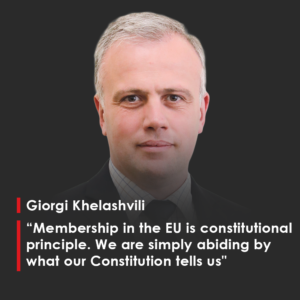 Sending volunteers to Ukraine is an issue that is regulated by international law. No government can deliberately organize and send volunteers, which would make any country that does so reconsidered as party to the conflict, as a belligerent. Georgian volunteers are there in Ukraine, fighting, even a member of Parliament, so this was yet another overblown criticism towards the government, because the government did not organize a chartered flight for volunteers to go to Ukraine, that would have amounted to direct participation in the conflict.

As for the European Union, it’s very easy and clear – We have it in our constitution. It was the Georgian Dream that came up with this idea to include membership in NATO and membership of the European Union, as constitutional principles. We are simply abiding by what the Constitution tells us, irrespective of what potential complications can come. We already made a pledge to apply to the European Union by 2024. Neither Ukraine nor Moldova ever set a date for application. In our case, the decision was much easier. It was simply moving the date two years earlier for the application. But also, what we thought about was an interesting development in the West, in the European Union, that now the West is much more coherent about Russia, about Ukraine, about the need for unity, and at the same time, I think there is this growing awareness of the fact that delaying the membership, either of NATO or of the EU, is counterproductive. With these political and legal circumstances, we decided to expedite the process. There is something that one would call a red line: our membership is a national course, it’s rooted in our history and our identity and therefore it can’t be changed.

If under the Russia attacks Georgia, will it be correct to say – the “Georgian Dream” could not avoid the war?

I think every historical circumstance is very different and I would not compare this massive Russian aggression to what happened in 2008, I think that was an isolated case, even if it was the harbinger of the things to come. We never said that it was Saakashvili’s fault what happened, but rather noted that the handling of the conflict and its aftermath was quite poor on the part of the government. Especially handling the war, the refugees, and internally displaced persons, the effort to secure the population, and to inform strategic communications was almost not existent. Many government members fled the country. Overall, there are things that you cannot avoid and then there are things avoidable and I would just repeat what I said in the beginning that every historic episode is unique, so you just can’t make analogies and compare. So I wouldn’t go as far as comparing 2008 with what is happening now in Ukraine, or what God forbid may happen in Georgia.