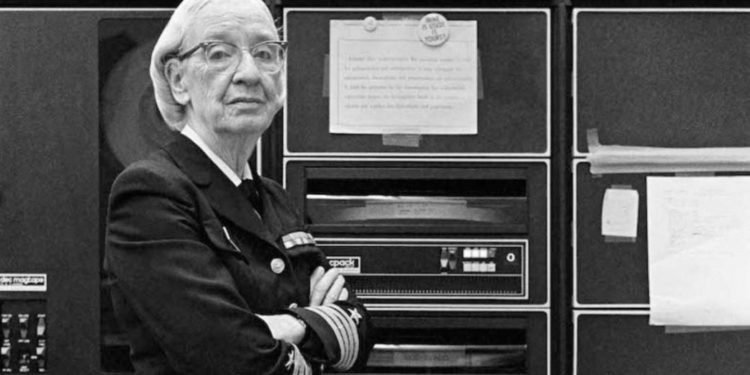 With a boundless interest in science, a tongue-in-cheek but brilliant, astonishing Grace – this is how an American programmer was characterized, who was not only one of the first female computer scientists, but also an outstanding mathematician and a successful naval officer. Grace Hopper’s legacy still inspires people working in technology or other fields. This is reflected in an award named after her, which was established in Georgia by USAID’s Economic Security Program in cooperation with TBC, the Mashavi Center, and the United Nations Women.

What will the Grace Hopper Award change for women in the Information and Communication Technology (ICT) sector?

Much can be said about Grace Hopper, however, one interesting fact about her best sums up the situation of women in technology – in 1969, the Data Processing Management Association recognized her contribution as a male computer scientist of the year, as there was not even a separate category for women at the time.

Since then, more than half a century has passed and technologies have developed at an unprecedented rate, however, women employed in this field are still rarely gaining recognition. Moreover, the share of women employed in this sector is still quite low. This is evidenced by a recent EU report – in 2018, women make up only 17% of those employed in information technology, only 19% of those involved in entrepreneurial activities in this field, and among ICT developers, just 9% are women. The reason for this, in addition to the stereotypical views in society, is that women often do not have access to information about career opportunities in this sector.

That is why the Grace Hopper Award was established this year to encourage women’s involvement in information and communication technologies in Georgia. In this format, it is the first program to present women involved in technology in our country, as well as organizations, programs and initiatives aimed at empowering women in this area.

Mariam Kobalia, a gender and youth affairs expert with USAID’s Economic Security Program, says the award serves as a positive example for more women to see themselves in the field. “If we talk about the economic empowerment of women in particular and look at the situation, we will see that women in Georgia are mainly employed in less profitable fields and at the same time in low-paid positions. As a result, we get a big difference between the average pay of men and women. Such is the ICT sector, which creates one of the highest paid jobs,” she said.

Mariam notes that the reason for the low involvement of women may be social norms, stereotypes and lack of role models. She also points out that often organizations fail to realize the virtues of their involvement, do not encourage the involvement of women, and so on. That is why they launched a program that, on the one hand, turns girls and women already active in the field into role models for others, and, on the other hand, highlights organizations that work in this direction.

To whom will the Grace Hopper Award bring recognition?

The Grace Hopper Award recognizes the contributions of women and organizations that promote gender equality and diversity.

Future Leader Woman, ICT Champion, Technology Startup, Women in Empowerment Program, Diversity Supporter, ICT Supporter for Women – these are the six categories in which organizations and programs will also be awarded along with individuals, for positive change within the organization, for creating an innovative product or service, or for empowering women in general. Along with individuals, organizations and programs will also be rewarded.

What prizes were set for the winners?

In addition to public recognition, the winner of all six nominations will travel to Israel on a 2-week study visit with the support of the Mashawi Center, with the UN Women supporting the winner of the Technology Startup category and helping to strengthen and expand it. Outstanding prizes were awarded by TBC – in the Future Leader and Women and Technology category, it will offer winners programs tailored to their needs, focused on professional development.

In addition, TBC has developed a large-scale communication plan that promotes awareness of the program throughout Georgia. “We want everyone to know that we can succeed in technology. The society will get acquainted with specific examples of successful women in Georgia, and based on this, many future professions may be connected with technology,” said Tina Kavadze, TBC External Communications Leader.

Tina notes that the field of technology will become even more in demand in Georgia and around the world in the future. “That’s why it’s very important for TBC, as a technology leader, to support women here and now so that they can be even more successful tomorrow.”

Who and how can register for the Grace Hopper Award?

Applications started on March 26 and will last until April 26. For details, you should visit www.ictwomen.ge, where you can not only nominate yourself but also present another, familiar person, organization, program, initiative.

“We wanted women not only to be able to nominate themselves but also to encourage others to be inspired by people,” said Nino Nanitashvili, Grace Hopper Award Program Consultant.

Each winner in each of the six categories will be revealed at a large-scale awards ceremony in late May.

Who will evaluate the nominees?

Nominees for the Gray Hopper Award will be judged by technology and innovation professionals from both academic and practical fields. These include:

Nana Dikhaminjia, Vice-Rector of Ilia State University, for the development of innovation and popularization of science;

The Grace Hopper Award is not just a one-time initiative, it is becoming an annual tradition. The organizers hope that with the help of the project positive changes will begin – in the future more women will find themselves in the field of technology, and organizations will be more encouraged to involve women.

“Georgia does not have the luxury of not involving half of the population in the industry that our country hopes for. This is a field that will help us develop a knowledge-based economy,” said Nino Nanitashvili.

So everything is ahead. For those who are still hesitant to choose technology as their future profession, we remind the words of Grace Hopper – “A ship in port is not in danger, but it was not built for that. You have to swim and find out novelties.”