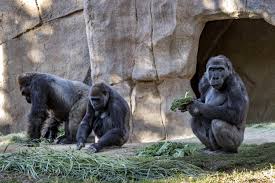 Several gorillas at the San Diego Zoo Safari Park have tested positive for the coronavirus, with several more symptomatic, the zoo announced Monday.

It appears the infection came from an asymptomatic staff member who had tested positive for COVID-19. Zoo officials said he had been following safety recommendations, including wearing protective equipment when near the animals.

San Diego Zoo Director, Lisa Peterson, said: “Aside from some congestion and coughing, the gorillas are doing well.”

Peterson added that caretakers are closely monitoring the gorillas, who will remain in their habitat at the park.

“Some may have it (the virus) and others may not,” said Peterson. “They live in a troop with a single silverback. He’s the leader. He guides them throughout the day. They look to him. It’s really best for them that they’re allowed to continue as they are.”

Around 5,000 gorillas remain in the wild. Because they live in close family groups, many worry that the infection may spread quickly and pose a threat to the already endangered populations.

Harris Lewin, Professor of Ecology and Evolution at University of California, said: “The potential for a COVID-like disease outbreak in either captive or wild populations of endangered primates is pretty high”.

The San Diego Zoo Safari Park has been closed since December 6 amid the lockdown in California, which has now become an epicenter of COVID-19, with 4,971 registered patients on Monday. Meanwhile, across America, the total number of infected persons surpassed 22 million over the weekend, and more than 375,000 persons have passed away.