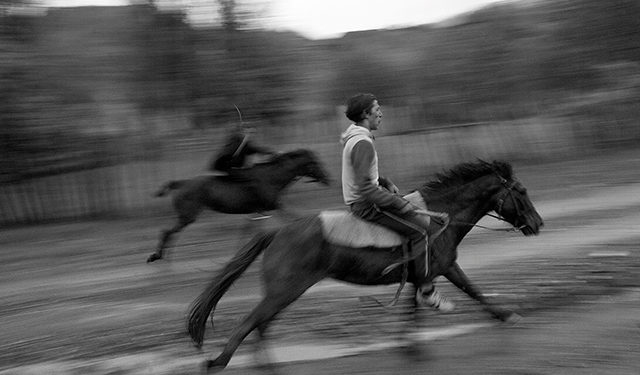 The good was everything else. The bad, on the books to be banned, was dog fighting. The event was an annual, multi-discipline sports day hosted this year by Etseri. Participating villages aside from us included Pari, Tskhumari, Becho, Nakra, Chuberi, Latali and more. All of it was for males; this really could be changed, say the other sex!

I was on hand only for the first part, which was a bareback horserace from the kindergarten building to the school crossroads, just below our house. Umbrella’d against occasional light rain, I found a good place to take photos from with my 35mm digital camera. I was shooting with a slow shutter speed of 1/30 to 1/40 second, moving the camera slightly in the direction of the animals’ motion to try to mix motion blur (legs, the background) with a bit of stillness (bodies of horses and riders). This technique is called panning. It seems to have worked. The only shot I left in color was that of the winner and his horse. I find myself choosing black and white for the majority of my photos at the moment, and may also make monochrome versions of earlier work too.

There were three horseracing rounds, with the 2nd and 3rd of these being between the two fastest steeds. It was over in a couple of minutes per round, quite thrilling to watch and capture in a few frames, all I had time for as they flashed by. One of our closer neighbors, recently married with a young daughter, of the proper slight stature for a jockey, won handily.

Next came the dog fighting, a blood sport though not meant to be to the death. This is usually held on the school grounds, lately in the fenced-in sports stadium, participant owners seemingly thumbing their noses at the school administration or daring them to take action, which they never have. I have watched only one such fight, in a different village about 20 years ago, just to say I had seen it; never again. In any case, the photos I might want to take just to document it can’t be posted online anywhere, as I’d be castigated by dog owners and also likely by those against. In any case, the rain was now getting harder, and I had quite a few photos to edit on my laptop, which usually takes much longer than taking them in the first place.

(Do we have lots if incidences of local people, including children, getting bitten by dogs? Definitely. I would like to compare the statistics with those of a similar area with no tradition of dog fighting, though I am aware that this would be suggestive rather than evidence of proof that raising these dogs to be aggressive definitely leads to more people getting bitten… I also have “skin in the game:” my own!)

I also missed all the other sports events while editing photos, as the rain continued: volleyball, won by Etseri; wrestling, by Latali; soccer, by Becho; arm wrestling, by Nakra in one weight class and Becho in another. (Etseri is legendary in this sport, however, boasting a 7 times world champion! He now lives in Tbilisi).

As I have mentioned, there is plenty of room to widen the field by making this type of event not just for boys and men; the ladies and girls are clamoring for entry, and I hope with them that they will soon be allowed. Why not? Svaneti has had female winners on national and international levels in judo and downhill skiing, for example. They don’t just cook, sew and clean! Milking is a great whole upper-body workout, as I found out when I learned it some years ago, from the fingers, hands and arms to the whole back, shoulders and chest. One of our neighbors showed me a long time ago how well she can plough with a donkey or ox, which I failed miserably at, my lines refusing to go straight at all.

People refused to let the rain dampen more than their exteriors, and the day was a great success, as it always seems to be. Anything to encourage local physical fitness and friendly inter-village competition. Sport seems to be alive and well in Svaneti. Now, if we could just get a swimming pool somewhere…