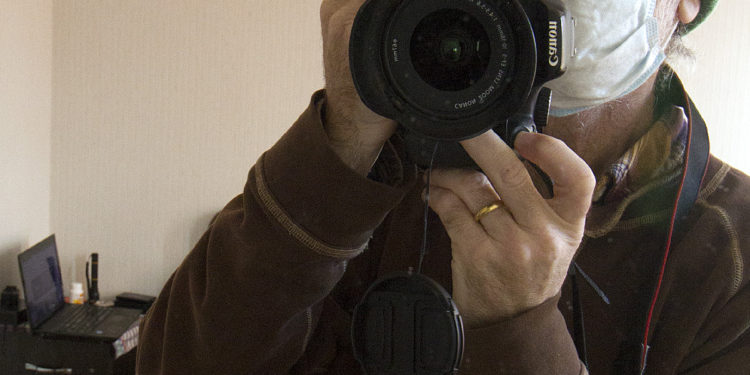 My set of concentric circles, each a successively smaller one representing those infected closer and closer in relationship to me and ending with me, alone in the center, has closed around me like a trap. It skipped a step or two in the process: my wife doesn’t have The Virus, but I DO.

I began coughing nearly two weeks ago. Fearing that this might be a recurrence of the occasional bronchitis which has sometimes plagued me since I was 16, I took myself off upstairs so that if I began hacking through the night like last year, at least my wife wouldn’t have to hear it. Turns out that this was the onset of The Virus, and my speedy departure into isolation might have saved her from getting it through proximity to me. Lacking any contact with the few other infected people in the village, we suspect I got it during the last shopping run to Zugdidi, which though masked was always risky.

A couple of days in, my senses of taste and smell departed me, which has been frustrating. The cough failed to worsen, however. Eventually, after a week alone upstairs (my own heated room, with kitchen and bathroom adding to the independence I had), I drove myself to Mestia for a test. This was administered, mercifully, some hours after the single midday hour usually reserved for such tests. I had pleaded ignorance to the time slot, foolishly not having phoned my village’s doctor in advance; they relented. I sat outside the hospital; a nurse did the nasal swabs there and retreated. Five minutes later: “You’re infected.” No charge, due to my having a Georgian ID card as a permanent resident. I phoned my wife straight away with the news.

No more symptoms have developed: no temperature, nausea, diarrhea. Just what I mentioned above, and no worsening of the cough either. I took my laptop up here, and about 15 TB of hard drives with movies, TV shows, music, e-books, fractal renderings and photos on them to keep me busy. The Magti USB modem we had been using for internet took the opportunity to have its battery pop out like a little pillow. Fortunately, my phone can serve the same purpose, so that battery will wait to be replaced.

My physical symptoms are so mild, I hardly feel sick at all! My mind has been racing, though. The several calls from various health practitioners have bolstered my feeling of not merely Joining the Statistical Ranks but of being cared for, of being advised how to get through this.

Today, my senses of smell and taste started making a small comeback: the aroma of the cold brew coffee I’d made a week or so ago registered, faintly! I made a cup, and could even taste it. A bit. It’s a start.

I’m most grateful that my breathing hasn’t got more difficult, as this must be a frightening thing in those who suffer with it. This far from a hospital, it’s good not to be getting worse. My FitBit watch reminds me to move around at least 250 steps each hour for at least 8 hours, and I pace the upstairs, slipping outside when my wife isn’t going to cross paths with me. (She’s been told to stay away from our school, where she’s the English teacher, for two weeks too, even though she has remained symptomless, just in case. Her laptop has never worked for the multi-person video calls she was using as barely manageable online lessons; only my laptop works for these but it, too, is off-limits to her, being a possible source of infection).

I’m allowed to be anywhere in the yard, but masked. The shop remains open for anyone who wants to come. I’ve posted the news of my Infection on social media, feeling that trying to hide it would be wrong and useless as well. The responses there and by phone in support have been most gratifying.

Two weeks of isolation following the test are required of me, making a total of three, as I started it a week before the test. Lonely, but bearable. I will always be grateful that my case has been so mild: plenty of people younger than me have died of this thing! It’s such a strange time, this year of unfolding worldwide madness, but it has only touched me lightly thus far. Meanwhile, with some days left to go, I have all the time in the world to think, pray, and be changed.