Going All In: Is Putin’s Gambling a Strategy or a Problem? 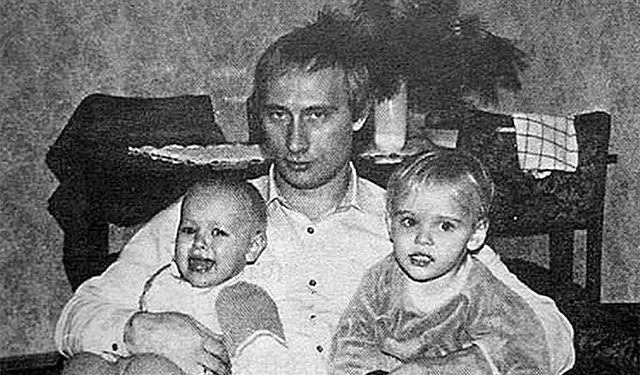 A young KGB officer Vladimir Putin with his daughters Katerina (left) and Maria (right) during their time with their father in Dresden, East Germany. Source: Russian Archives Photo via Getty Images

The invasion of Ukraine on February 24 caught most observers and analysts off guard. Many thought that there was no way a renewed combat operation could occur in the nation. Others, like myself, thought that an increase of kinetic operations in the occupied Donbas regions would take place. With the launch of a total invasion into the country, almost all had come to think that Ukraine would surely fall under the might of the Russian Federation.

This did not come to pass. After weeks of fighting and limited territorial gains, Russian forces have paid dearly for every inch. As Ukrainian resistance hardened, many began to think that Russian President Vladimir Putin had made a reckless gamble in throwing the mass of green-clad Russian forces he thought would surely crush a weaker and numerically inferior force. However, upon closer observation, it is unlikely that this man of infamous mystery would ever make such a move without a proverbial card up his sleeve.

Gambling inherently incurs a risk of loss, and typically a significant risk at that. Putin is not one to allow this. Since his ascent to power, he has constantly viewed Ukraine as “the one that got away” to the West. His desire to see Russia regain its former Soviet-era greatness was through Ukraine, as well as the subjugation of Georgia, Kazakhstan, and Central Asia.

Europe, Canada, and much of Latin America is seen collectively as “The West” and under the purview of the United States in many respects. As Putin sees it, much of the former soviet empire is seen as still in the sphere of influence of Russia. As a result, these post-soviet nations should work within that space and symbiotically with the Kremlin, rejecting Western and American influences. Almost like the concept of divine right, Ukraine was an extension of this vision and that the nation rightfully “belonged” to Russia.

To achieve this hegemony, Putin became a master of ensuring his success by controlling the variables involved in any given social or governmental mechanism. He would never make decisive action without the “insurance policy” of either ensuring outside actors would not hinder his success or that they would support his actions.

This framework was demonstrated in much of Putin’s early business dealings while working in various positions in Moscow. In his autobiography, Putin explains how controling the litany of mafias and organized crime groups was paramount to obtaining the control he so desired. Threats, killings, and weaponization of the police against the opposition helped him rise to national level management.

Using law alongside force worked for him at the national level. However, he ran into obstacles when attempting to exercise this same strategy on the international stage. In Georgia, he tried relentlessly to manipulate government policy and steer them away from the rising Western influence. His 2008 invasion did little but gain territory and leverage at the negotiating table, while galvanizing Western sentiment in Tbilisi.

Ukraine, while always a problem, became urgent with the 2004 and 2014 revolutions. Incredible amounts of Western sentiment led Putin to act in the same way as he did with Georgia. By seizing land and forcing Ukraine into a stalemate, they were kept from becoming too close to NATO and the EU. In both Georgia and Ukraine, Putin maximized his control of the variables involved, prepared the narrative, and used force only when he knew victory was certain.

The invasion in 2014 laid fertile soil for the invasion this past February. By “liberating” the two self-proclaimed republics, this gave him a caucus bello to offer them protection. Under the guise of what is commonly called in United Nations law “responsibility to protect” or R2P, he painted the narrative about an oppressive Ukrainian government. Using Russia’s perceived R2P is just another form of Putin manipulating the law to fit his narrative.

The personal side of the Russo-Ukrainian relationship also plays into Putin’s strategy. Former Ukrainian presidents prior to Volodymyr Zelensky were either able to be manipulated, or acted in a way that never threatened the Kremlin “sphere of influence.” Zelensky’s desire for EU and NATO membership, removal of Russian media influences, and a renewed attempt to change the tide with the separatists caused the fire in the Kremlin to ignite.

Next, the Russian leader took time to prepare the homeland and his forces. Just as Moscow had done after Georgia, they launched widespread reforms in the military and the development of new weaponry, or improving the arms in stock. Reforming the economy to lessen the impact of foreign sanctions, building a proverbial “war chest,” and divesting of foreign dependencies made the country insulated from tough long-term sanction campaigns.

Then came Afghanistan. The poor performance of the United States and other NATO military forces attempting withdrawal from the collapsing nation assured Putin that the Americans would be unlikely to interfere with any other foreign missions for quite some time. With Europe secured by Russian natural gas deals, America looking weak on the world stage, and Ukraine left begging with little hope of any security promises, the time was nigh.

However, a seemingly unassuming event would halt even the entirety of a Russian invasion force, and Putin himself. Enter the Beijing 2022 Olympics. In leaked communications obtained by a US intelligence source, Xi asked Putin to delay the invasion so China could score its propaganda victory for the world to see, and not be marred by the background of a European war. Putin, with his foreign trade likely being restricted to mainly China post-invasion, had no choice but to bow to this request.

However, with the 2022 Olympics completed, the plan he had prepared since the close of 2014 was ready for action. Despite setbacks due to tactical and operational leadership, he would not let this prey escape his clutch. Even with the Russian redeployment to the east of Ukraine to seize the Donbas region, it is unlikely this will be the end.

Putin’s thuggish history and vindictive nature will not allow transgressions, particularly those by NATO and the West, to go unanswered, even if it takes the rest of his life. For as long as he holds his position of power, it is likely he will not let up. Like a villain escaping capture by the hero, this is not the last we’ve seen of the brutal rolling of the dice by Vlad. Putin is more than happy to go all in, as long as his strategy includes always coming back to the table.