Globalization, Being Crushed by the New Iron Curtain 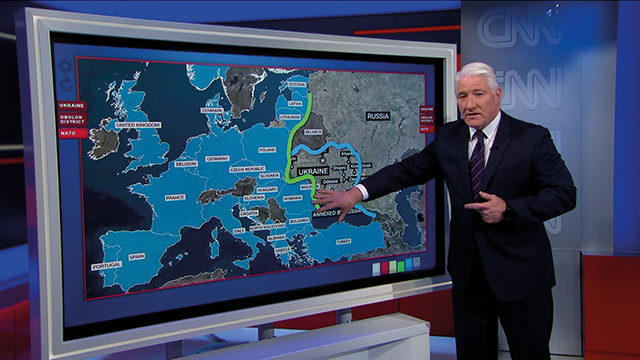 CNN's John King lays out how potential Russia control of Ukraine could remove a buffer between NATO member nations and Russia, creating a new Iron Curtain 32 years after the Berlin Wall collapsed.

There has always been a big controversy about the pros and cons of globalization and the degree of vulnerability of smaller nations to the process, the dominant argument being that bigger countries would take it easier and with much higher chance of consequential development than the minor ones. The predominant thought to this end is that the countries with a lesser population, as well as a less influential culture and language, might be assimilated under the clout of globalization faster and more simply.

Effectively, Georgia happens to be one of those most apparent candidates for this kind of almost guaranteed destiny because it is small in size and also has a rapidly dwindling populace. So, could it fairly be deduced that the process of globalization, hampered by the Russian-Ukrainian war, might be grist to the mill of Georgia’s patriots, who organically despise anything that is close to the hot contemporary phenomenon called globalization? Understandably, this kind of approach might be taken something like a provincially sounding nationalist prevarication, or just a shaggy dog story, but you know, there is always a grain of truth in every joke.

Russia’s invasion of Ukraine flipped the world order that was in place from the end of the Cold War. A lot of political researchers would argue that the ongoing war happening in the middle of Europe is putting an end to the globalization that has been experienced by humankind over the last three or four decades; pushing numerous communities and ethnic groups into bereavement and isolation, forcing them into deeper contemplation and doubts about the good and bad sides of globalization in general.

While such thoughts mature, it becomes clearly noticeable that people are becoming massively divided over the issue, the schism between them growing by the day; their radicalism and revolutionary moods observable across global society. The reasons are more than ample to explain this change. For instance, the United States and its allies have imposed unparalleled sanctions on Russia and have granted profuse financial and military assistance to Ukraine, which makes one of the greatest nations in history as isolated as it could be, even to the point of total exhaustion of its existential variables. Numerous countries and their administrations have united as never before with the unprecedented desire and readiness to launch an economic war against Russia, which might someday involve other peoples in further division and isolationism. The West began seizing the assets of the wealthiest Russian individuals, instigating scary thoughts the human attitude towards individual opulence is becoming precariously irrelevant. Russian flights are being prohibited in western airspace, and the Russian economy’s access to imported technology is being abruptly restricted. The reserve assets of Russia’s central bank have been frozen, and Russia was kicked out of the famously convenient SWIFT financial payments system, as well as from other basic international financial institutions.

When the world managed to escape the rigid limitations of the Cold War at the end of the 20th century, the global financial community was full of the desire to cooperate with Russia, giving it access to international markets, hence accelerating globalization. The broadening of globalization in the recent past very successfully promoted worldwide trade and augmented the money markets all over the place, triggering omnipresent economic growth. But this is all now going down the drain at this frightening moment of war. The technology-driven businesses have proliferated globally, uniting the world even more, but as we speak, human hearts and minds are being chewed at by doubts as to whether this makes any sense anymore. People are becoming more and more aggravated over the growing uncertainty of their prospective success in doing business on an international level and gaining financial wellbeing.

To cut a long story short, the amazing and almost supernatural process of globalization is at this time being severely crippled by the chilling sound of the once loathed iron curtain, falling deafeningly, the unexpected noise heard all over the globe.