Giorgi Kalandarishvili, Chairperson of the Central Election Commission of Georgia, was not named by President Salome Zurabishvili among the candidates for the next chairperson of the CEC, despite not questioning his professionalism. GEORGIA TODAY began its interview with him by asking him his feelings when he heard this news.

“To some extent it was unexpected,” he tells us. “There was no professional or legal circumstance that would lead to such a decision, except for political motives, and the explanation given by the Presidential Administration for the selection competition for the chairman and members of the CEC indicates that it was guided by political motives. The President does not question my professionalism, and also appreciates my experience and activities, however, at the same time, she noted that the purpose of her decision, both in the case of the chair position and the members of the CEC, was the selection of candidacies through a broader political consensus for competitive positions.

“In the current political climate, it is difficult to achieve such a consensus when candidates are discredited by completely groundless accusations, all the more so if we consider that among the candidates presented by the President to the Parliament, there are still representatives of the election administration. We wish success to our colleagues in the next stage of the competition. We think that their candidacies are another acknowledgment of the election administration and proof that there is no problem with the institution’s credibility.

“The election administration is an independent body that works in compliance with democratic principles, with a high professional standard, transparently, and it is unfortunate that the evaluation of the activities of this institution and its representatives might not be based on objective criteria, but on political motives.

“The decision made by the President of Georgia regarding the selection competition for the chairman and members of the CEC became the cause of political insinuations. In particular, from the side of politically interested persons, opinions are heard that the reason for the President’s decision may be the political bias of the acting members of the CEC, or flawed conduct in the 2021 elections. In fact, we saw a situation where this decision became the basis for a political attack. This harms not only the professional dignity of those participating in the competition, but also the reputation of the election administration as an independent and impartial arbiter. Yet, it should not be understood that the President did something illegal or unconstitutional; on the contrary, it was her authority, just, as I mentioned above, this decision put the institution under political attack.” 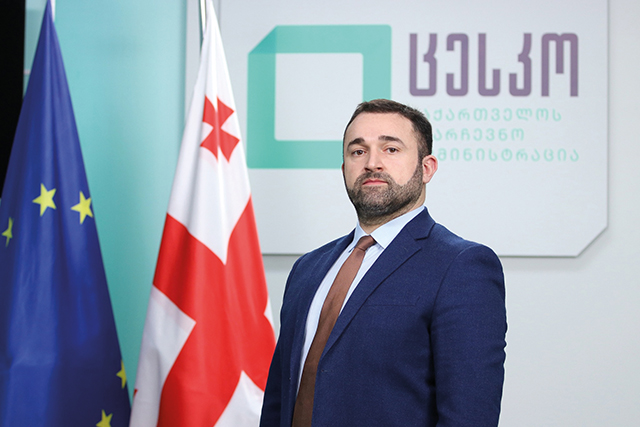 Who’s to blame for the President’s decision? Who might be behind it?
In the last weeks, we’ve seen a number of political calls and pressures on the President regarding the formality of the competition, indicating that the President has to take responsibility for this process. This might have had some influence on her decision, because if we return to the motive of this decision, which appeals to consensus, we will see that she had already presented my candidacy twice in past contests, and there was quite a growing dynamic in relation to my candidacy in the legislative body, with multi-party support. In this case, in addition to compliance with other criteria, today we can observe that the administration of last year’s municipal elections was at a high professional level, the administration of the by-elections, and technological intervention in the election procedures, increased transparency and resulted in a lot of progress, as well as positive evaluations from international organizations and some embassies. These were precisely the prerequisites that gave the basis for the expectation that the number of supporters might increase significantly in relation to my candidacy. Unfortunately, it did not. Therefore, it is unclear why we should appeal to political consensus, because the institution of the president is not a link in this process, where the issue of support/non-support is decided.

What’s your opinion of the chosen candidates – Tamar Alphaidze and Revaz Eradze?
It would not be ethically correct for me to evaluate them, being a former candidate, when I do not know the lady participating at all and Mr. Egadze is our colleague. The only thing I can say is that I wish both of them success. There are a number of procedures and several stages ahead. That employees of the election administration have been nominated is really gratifying, since the presentation of their candidacies is another recognition of the election administration.

Does the President’s decision not to name you among the candidates mean that we’ll not be seeing you back in this position?
The competition is complex and has several stages, which take time. Until we see the results of the competition, it is physically impossible to talk about it. My term of office has not yet expired and my authority will continue until the CEC has a new chairman. Let’s wait and see what happens. I am still in the CEC, and I will put all my efforts into the remaining period. This decision will have no negative impact on my work and its quality. My energy and attitude will be exactly the same as it has been since my first days in this position. We have no time to lose, we have mid-term elections in the Senaki municipality in early October and a number of projects to be completed and implemented.

Why don’t we have an electronic election system yet? Will such technology be brought in in 2024?
During my chairmanship, the decision was made by the commission that we should increase the scale of piloting, and not only did we increase the scale, we used complex technical means together with verification machines for the first time during the interim elections of the Batumi City Council this year.

Based on the results and conclusions of the pilot, the use of these tools has great prospects in Georgia, simplifying election procedures, specifically on the day of voting, minimizing human errors, making preliminary results and voter turnout known in the shortest possible time, removing stress and tension at the polling stations and putting an end to manipulations of unified voter lists.

The development of this issue needs a lot of work yet: Awareness raising, cultural transformation, appropriate support from the stakeholders, etc., but the main thing is still financing. We need to know how much the state will be able to provide these resources, and how much the contribution of donor organizations will be in this process. This is a key issue around which we are working intensively. It takes a long time to raise awareness, work on culture, and develop capabilities. We are doing our best to be able to make some progress in this direction by 2024.

At the Senaki by-election, although it is small in scale and there will be only three precincts, we will not miss the opportunity to again employ technical means of voting, vote counting and verification machines to see again in practice the opportunities of these machines and areas of practical application.
Gradual implementation is exactly the echo of the good international practice applied by other countries.