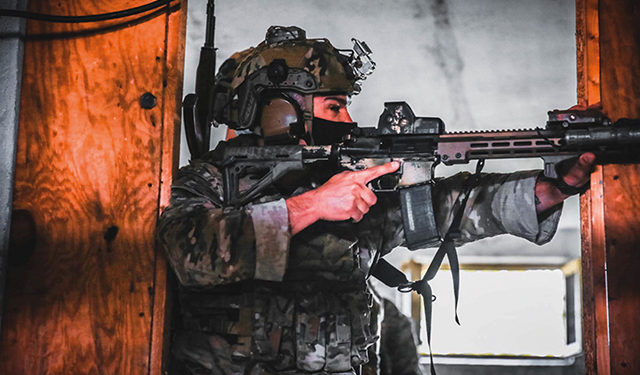 Beginning May 3rd, a blend of primarily Eastern European Special Operations forces are traveling the region for the annual training exercise Trojan Footprint 21. Georgia is not only sending its elite, the Georgian Special Operations Forces (GSOF), but also hosting training events locally. However, with warfare becoming more asymmetrical and requiring the skills of highly specialized small teams, the GSOF will need to not only expand, but also possibly branch out into new subordinate units.

Like much of the Georgian military, the GSOF has its foundations in the old Soviet Spetsnaz formations. Their first test was the civil war and internal conflicts of the early 1990s, particularly in Abkhazia. As there was no established GSOF element, many were ad hoc and based on their prior associations in the Soviet Red Army. It was not until 1999 that Georgia officially set up a specialized military unit institution.

The early 2000s formalized their ranks, and through foreign investment and training programs, they began to resemble the NATO-certified force they are today. Turkish commandos and United States Special Forces detachments worked with the early GSOF in a continual development program. GSOF even played supporting roles in the KFOR operations in Kosovo and in the 2001 Macedonian insurgency.

This support of equipment and training continued successfully until the Russian invasion in 2008. GSOF, on multiple occasions, struck fear in the Russian invasion force through unconventional warfare tactics and sabotage. In one such instance, they launched an assault on the Russian command unit of the 58th Army, even wounding the commanding officer himself and almost destroying the unit.

A testament to the overall Special Operations mission, they were able to overcome and disrupt a much larger enemy with fewer of their own resources. In the NATO sphere, their operations in Iraq and Afghanistan shed any remaining doubt of their technical and tactical capabilities. Their recent defensive actions against attempted Taliban assaults have saved the lives of NATO service members and their civilian support staff on several occasions.

The GSOF organization consists of three main components, as well as supporting logistic, administrative, and finance units. There is the Special Forces Battalion, the Naval Special Operations Company within that unit, and a separate Ranger Battalion added in 2009. In addition to these, there is also a staff company and the cadre of the Gela Chedia Special Operations Training Center.

The need for more of these specialized soldiers has grown, not just in Georgia, but in the NATO arsenal overall. With missions ranging from humanitarian and advisory in Africa, counter-Chinese aggression in the South Pacific, and opposition to increasing small-unit incursions in Russian-occupied territories, Special Operations units will have an increased workload in the coming years.

To deal with this rapidly increasing operational tempo, a surge in recruitment must take place to support those operations. Georgia is no different. While they have routinely kept their numbers confidential, it is estimated that the brigade-size element that makes up the GSOF numbers around 1,800 personnel.

One of the obstacles involved in this could be the general public perception of military service. While there is the Soviet relic of low opinion of the armed services as something only the uneducated or inept would venture into, many see it as an avenue to nowhere. As the Army is far more modernized than even many of their Eastern European neighbors, the first step should be a total revision of the recruitment approach. In other terms, a rebranding.

Encouraging other soldiers to ascend to the Special Operations community is another obstacle seen inside the military. Many times, either the soldier themselves or their commander do not want this. The soldier can often have unreasonable doubts or have a lack of understanding of the path it takes to achieve their position. More significantly, commanders are often reluctant to lose soldiers to this process, seeing it as a loss to their units in terms of personnel to an already stretched military force. However, this also becomes a recruitment issue as not enough recruits are being fed into the force.

On a larger scale, the total defense framework must be rebuilt to its former glory. The absence of a naval force, despite the large stretch of coastline, is disgraceful. A new Georgian Navy is long overdue. With this, the underwater demolition teams (UDTs) that come with a special naval warfare force should not only be formed but separated as their own naval Special Operations element, in the United States Navy SEALs model.

At the other end, the lack of any sizable Air Force is something that will spell doom in the next war. Air superiority is king in modern warfare, and the Air Force Special Operations elements that support and control ground units are key to success. These elements include the Combat Controllers, specializing in air-ground communications and combat command and control in adverse conditions. This communications and coordinating platform is essential to successful operations with both air and land units. Georgia cannot continue to operate without these force multipliers in its arsenal.

The total expansion and subsequent development of GSOF is overdue, but is also something that will take years, if not decades. A positive side effect of this is a total elevation of the total force training quality. Internal training events between conventional and special forces not only create a good bond between the two families in the armed forces, but also allows for the sharing of operational and tactical knowledge. This type of cross-training environment in the Georgian armed forces, while surely not cheap, will only serve to better the national security picture of the country.

As is the saying goes, it is better to start late than never. Trojan Footprint 21, and its litany of other training exercises, provide unrivaled experience and lessons for GSOF and their partners. However, it should be noted that the resources, manpower, and training conducted here in the homeland are vital and should be invested in.

In the next regional conflict, Georgia may not be so lucky to evade involvement, such as seen in the recent Nagorno-Karabakh clash. GSOF, as all Special Operations states, are the tip of the spear and as a result need the numbers to support that position. In addition to its combat readiness, the cultivation of a healthy and strong Special Operations community within the Georgian military community will begin to formulate its own gravitas among the people.

When the next “wave” comes, Georgia should not allow their Special Operations teams to be caught understaffed, but rather engage with their own trident of substantial air, naval, and land components, working together and not limited by equipment or supporting assets.