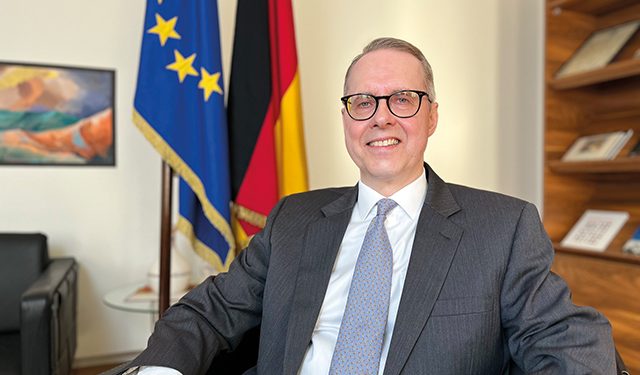 Peter Fischer arrived in Georgia at the end of August to take up his posting as the new Ambassador of Germany to Georgia. He came to us from the United Arab Emirates.

“My past relationship with Georgia was not very substantial because, unfortunately, I had never been here,” he tells GEORGIA TODAY. “My career took me to Singapore, China, the UK, Israel, the USA and then the United Arab Emirates, so you see, I never came close to this region. When I told people I was coming here, everyone gave it glowing reviews. I suppose one connection that I have to Georgia is growing up and going to university in West Berlin. Berlin was divided and we were, like Georgia, facing the Soviet Union, facing Russia, facing that whole system, and in Berlin, we were freedom loving, just like Georgians are.”

We begin our interview by asking the Ambassador for his view of the current Misha Saakashvili situation.

“We are observing this case very closely, in fact, an observer from the embassy is attending the trial,” he tells us. “Of course, the reports that Mr Saakashvili is seriously ill are reasons for concern, and our position is that it is the responsibility of the Government of Georgia to make sure that his rights are protected and to ensure the health of all prisoners that are in custody. So, we continue to observe, and we recall the responsibility of every government in the world to give humanitarian and adequate medical care to prisoners. 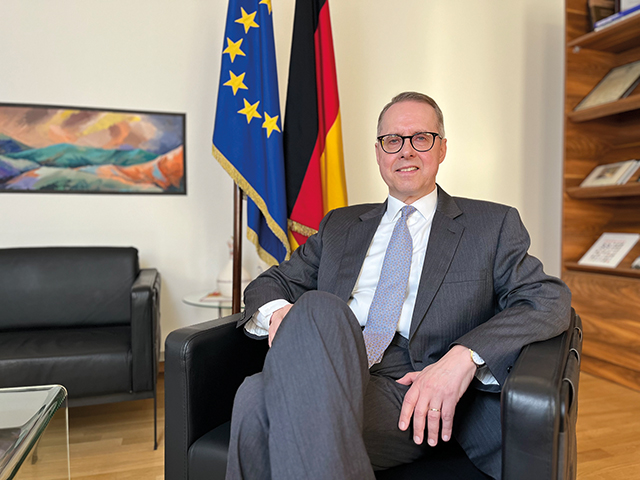 The window the EU opened this year will remain open for a while. And yet our political parties are struggling to find a middle ground. What would you advise them?
It is true that there is a window, and that it is wide open. It’s an immense historic opportunity, and, speaking as a German, I can say that it was the greatest luck and blessing that Germany had after World War II, that the European Union was created and we had the chance to become a member. It is the basis of our peace, stability, and prosperity. This opportunity exists and it’s true that the opportunity is now. So, if it is a priority, focus on it and don’t be distracted by other issues that might come up. That would be my advice.

Which of the 12 recommendations do you see as the most problematic for Georgia right now?
The independence of the judicial system, depolarization and deoligarchization, because these are the three major conditions for joining the EU. One is to share the goals and values of the European Union. We’re a club, we have the same goals and values, we only want members that share our goals and values, and an essential part of those goals and values is to be a sustainable, pluralistic democracy. Pluralistic democracy means that all sectors of the society enjoy rights and can practice their rights and take part in the political life and economic life of the country.

Former Chancellor Angela Merkel said she would not apologize for her Russian policy. Don’t you think an open and direct refusal to apologize can damage relations between two friendly countries, especially when we know that thousands have paid the price with their lives because of such diplomacy?
Angela Merkel admitted that she made a misjudgment, but what she said was that under the conditions at the time, she acted correctly and according to the best of her judgment, and now she sees no reason to say “I’m sorry” for having done the best she thought she could under the conditions of that time. In hindsight, it’s always easy to recognize your mistakes, and Germany made make one mistake – Our Russian policy was always based on the premise that we have fundamental differences with Russia but that at the same time, we have to reach out a hand and find areas of constructive engagement. In particular, for our energy relations, we said that buying Russian oil and gas is a stabilizing element: Russia sells, we buy, we have relationship and both sides depend on that relationship in some way.

All our arguments were right about stability creating prosperity, creating economic opportunity, practicing cooperation, despite fundamental concerns, but some people criticized us and warned us. They said: “Your rationality is not the same rationality as Putin’s. Putin has other goals, national greatness, controlling the area that he declares as his to control, and he will be willing to throw all that the West has to offer in terms of opportunity away for this dream of national greatness, power, control.” Yet, we always thought a war would be unlikely. That was the mistake.

Every year, Georgia records at least 10 cases of femicide. Can you share the best of Germany’s experience with us?
Girls and women have the same rights as men. That should be obvious. Unfortunately, in many parts of the world, there are traditions that discriminate against girls and women. If you don’t allow girls and women to reach their full potential, to make their full contribution to society, to the world, we will not reach our full potential as humanity.

The only advice that I can give from the German perspective is that you need to first get into the minds of everyone that girls and women are equal, and that they deserve no other treatment than anyone else. Second, you need good legislation. Acts of violence, murder and even discrimination need to be illegal, forbidden, and perpetrators of acts of violence against women need to be prosecuted. So, both education and a legal system. And I know that the Georgian parliament is considering new laws as we speak.

Social movement ‘My City Kills’ tells us Rustavi was polluted for 310 days out of 365, and Tbilisi remains one of the most polluted cities in Europe. What should we expect from you in reaction, as one whose personal priority has always been environmental protection?
Our way of living has become unsustainable. We are using our natural resources faster than they can regenerate. Everyone who has a garden knows you can have damage to the trees, to the plants, but in a year or two, maybe even next spring, they will come back. But we are using nature and our atmosphere faster than it can renew itself. Once you understand that, you know that it is going to end in a big catastrophe. A crisis is already brewing. You referred to bad air quality. Where that is the case, if I open my windows, I’m breathing poison and it’s a catastrophe.

I’m convinced that we all need to work together, and it needs international cooperation. It is a priority for me to work with our Georgian partners and friends on environmental issues. It is already a focal point of our development cooperation. We just signed a development finance contract for intelligent urban mobility in Tbilisi and Batumi for almost 49 million Euros, where the traffic flow will be better planned, we’ll get more public transport, more non-motorized transport, and that will create better air quality and, in general, better living conditions. We’re also focusing on energy efficiency and renewables, and on biodiversity and nature protection.