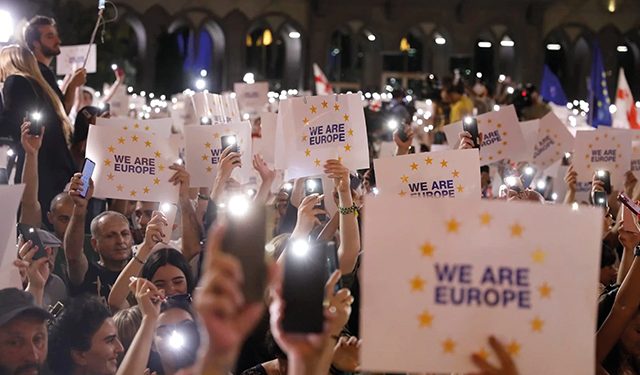 The European Union (EU) has granted Georgia a “European perspective”, meaning it is on course for ultimate integration with the bloc.

Yet this is not what the majority of the population had hoped for, which was the same candidate status awarded to Ukraine and Moldova. The lesser status means Georgia will need to fulfill a certain number of conditions to become a full candidate.

EU politicians had praised Georgia’s progress. So had Georgia’s ruling party, the Georgian Dream. The majority of the people, however, felt that the political class has not done enough, and this provoked large-scale protests.

Before 2022, Georgia, Moldova, and Ukraine, the countries with territorial problems caused by an unwanted Russian military presence, had little hope of advancing their EU aspirations. But the Russian invasion of Ukraine has since upended the geopolitics of the wider Black Sea region. Brussels re-invigorated its push eastward in a move to finally break Russia’s determination to dominate its pro-Western neighbors.

Ursula von der Leyen, President of the European Commission, said that “the door is wide open. It is up to Georgia now to take the necessary steps to move forward.” In a last desperate attempt to influence the decision-making process, Georgians took to the streets. On June 20, an unprecedented gathering of some 120,000 people in the central Tbilisi demanded reconsideration of the commission’s recommendation. On July 3, tens of thousands again turned out to demand the government’s resignation.

Yet the EU decision was not totally unexpected. The ruling party and the EU have for months been trading criticism. To this should be added internal troubles in the country, arrests, demonstrations and divisions within the political class. The implications of all this are not yet clear, but some early analysis suggests that the geopolitical situation in the region was the main driver. The government was probably nervous about any unfriendly signal from another country promised NATO membership and with a history of resistance to Kremlin aggression.

It therefore tried to pursue a balancing game vis-à-vis Russia over the war in Ukraine. The fear of Russia might not be entirely overblown. Although Vladimir Putin followed the EU Commission’s decision by stating that Russia has nothing against the EU’s enlargement, Foreign Minister Sergey Lavrov was critical about the Union’s ambitions. Moreover, Russia has for years crusaded against the EU as much as against NATO.

Whatever the reason behind the Georgian leadership’s behavior, there is little hope the country will be able to make significant progress. First, the problem lies in the very nature of Georgian politics, which is extremely polarized, leaving little room for constructive dialogue between opponents. The EU’s 12 recommendations for Georgia include “the commitment to de-oligarchization” by eliminating the excessive influence of vested interests in economic, political, and public life. Other areas include addressing political polarization, where both the opposition and the ruling party are to blame. No less important is to build a “transparent and effective judicial reform based on a cross-party consultation process.” The recommendation package also includes the strengthening of the Anti-Corruption Agency, which has seen some critical damage to its functioning over the past couple of years.

But the inherent problem is that realization that these and other recommendations would Georgian Dream’s. This leaves little hope for changes before the next parliamentary elections in October 2024. Moreover, the opposition parties are too divided and disconcerted, as the July 3 demonstration showed, to mount a decisive struggle to force a change.,

Looking ahead, despite some progress on its EU path, Georgia’s position will remain weakened by internal division. The political battle risks undermining the country’s Western credentials, as does the fear of a hostile Russian response. No less traumatic will be the ties with EU officials – acrimonious exchanges of the past several months are likely to haunt future bilateral relations.

And although the ruling party unveiled an ambitious program which aims at fulfilling the EU recommendations, the very nature of the internal Georgian politics (its diminished culture of political language included) will hamper real prospects of progress.