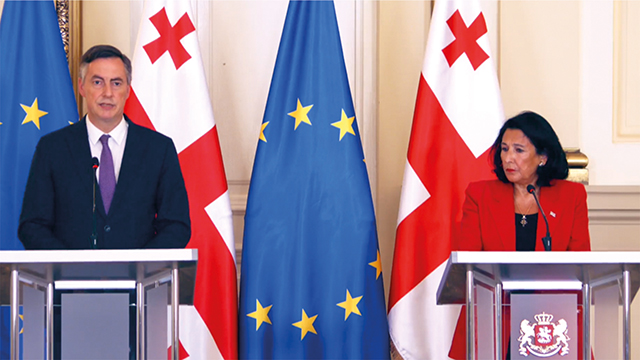 As part of the Council of Europe Project “Strengthening Media freedom, Internet governance and Personal data protection in Georgia,” the Committee held a two-day working meeting on Standards of Freedom of Expression and Professional Regulation of the Media: Experience of the Council of Europe and the European Union, which the Committee members and other MPs attended. Article 10 of the European Convention (freedom of expression), as well as media freedom, were the main topics of discussion.

“The European Union and Council of Europe’s experiences in this area are instructive for us, as it relates to standards of freedom of expression and professional regulation of the media,” David Songhulashvili, Chairman of the Sector Economy and Economic Policy Committee stated. “We shall carefully evaluate the obligations set forth in the EUAA. This topic needs to be discussed as soon as possible. On the other hand, it is intriguing to observe what the best practices are in this area in the EU member states and how the legislation we are about to enact adheres to the EUAA obligations.”

The experts of the Council of Europe focused on the importance of implementing the decisions of the European Court of Human Rights at the national level and on the commitment assumed by Georgia within the framework of the Georgia-EU Association Agreement to harmonize its legislation with the EU Audiovisual Media Services Directive (EUAVMSD).

Council of Europe experts Besarion Bokhashvili, Toby Mendel and Eve Salomon, Ketevan Shengelia, head of the Georgian desk of the European Union program Creative Europe and employees of the Communications Commission participated in the working meeting together with the Georgian MPs.

Papuashvili: 7 Committee Meetings and 5 Working Group Meetings Held in Relation to 12-Point Recommendations So Far
“It is crucial for our society to be aware of the ongoing parliamentary activity in order to avoid being misled,” Parliament Speaker Shalva Papuashvili said this week. “Following the conclusion of the spring session, seven committee meetings were held. To date, five working group meetings have been held in relation to the EU’s 12-point recommendations. The legislative process is still ongoing.”

Papuashvili also spoke about the appeal of the opposition representatives to the President of Georgia and the agenda of the extraordinary session proposed in the appeal.

“We observe that certain members of the opposition participate in the aforementioned parliamentary activity, while others refuse to do so. By calling an extraordinary session, they aim to show that they want to work while others do not, but the reality is quite the reverse,” he stated. “How do you envision inclusivity when, on the one hand, you offer to approve ready-made draft laws, even those that go against the 12 recommendations, rather than taking part in an inclusive process that the Parliament has already begun?”

“There is nothing mentioned in the EU recommendations concerning the proposed constitutional amendments. In contrast to the 12-point recommendations from the European Commission, which urges us to elect non-judge members, the second issue, which concerns the common courts, entails, for example, the postponement of the election of the members of the Council of Justice. In other words, it goes against those 12 recommendations as it provides for the introduction of the mechanism of dismissal of judges nominated for lifetime tenure, which is prohibited by the Constitution. The third issue of common courts and the fourth issue, which deals with anti-corruption issues, are also in violation of Georgia’s Constitution. As such, the extensive nature of the 12-point recommendations necessitates specific mutual consent and cooperation. Let me use this opportunity to remind you that all of this needs parliamentary activity and labor. Therefore, to portray parliament in such a way that suggests it is not functioning and needs to do so immediately is to, to put it kindly, mislead our society,” the Speaker stated.

Papuashvili once again called on his opposition colleagues to engage in parliamentary activities.

“If there is a desire to be a participant in the European future of Georgia, this desire needs to be expressed in the parliamentary work, and I ask you to participate in this legislative activity,” the Speaker addressed the opposition.

Parliament Elaborates on EC’s Recommendation on Deoligarchization
Shalva Papuashvili met with the representatives of the parliamentary political parties to discuss the 5th recommendation of the European Commission, which envisages the implementation of deoligarchization in Georgia.

The meeting also focused on the law adopted in Ukraine on deoligarchization.

“One of the 12 recommendations addresses the issue of deoligarchization in relation to Georgia, Moldova, and Ukraine. The guidelines in the example of Ukraine emphasize the need to put the existing law into practice because it was only put into force in May of this year despite being adopted in Ukraine last fall. We can roughly infer what would be intended in the case of our recommendation from the example of Ukraine. We can also talk about the concepts, procedures, and standards of Ukrainian law. We see that, regrettably, deoligarchization has resulted in the instrumentalization of this term in Georgian domestic politics and, as a result, further deepened the desire of radical groups to bring destruction into politics. Ukraine’s law is advantageous because it is detached from the Georgian political subjectivism. The European Union, among others, has called for the implementation of this law, which was drafted by foreign recommendations and practices detached from Georgian political subjectivism. As a result, this law can serve as a good example in order to avoid accusations that the law favors one party over another,” stated Papuashvili.

“The Ukrainian model is composed of four elements. First, regarding an individual interfering in politics. Second, a large number of financial resources, which is calculated by multiplying the subsistence minimum by one million. Thirdly, it implies impact on the media, and fourthly, monopoly on the market. According to the Ukrainian model, a person will be classified as an oligarch and added to the special registry if three of these four criteria are met. The Ukrainian government makes this decision, which the president ultimately approves,” Okhanashvili stated.

As Alexander Elisashvili, the Chair of the political group “Citizens” stated, the Ukrainian law should not be translated directly, because there are many gaps and uncertainties.

“It is unclear how the Defense and Security Council in Ukraine determines who is an oligarch and whether to add a certain person to the registry of oligarchs. Additionally, it is absurd that government employees are prohibited from speaking with the oligarch. Who is in charge of this communication if it is secret? The Venice Commission’s conclusion would be interesting to hear. We have now decided to share our opinions. My proposal is to modify the law to better reflect Georgian reality,” Elisashvili stated.

Members of the parliamentary majority and political groups, Girchi, Citizens, and European Socialists, participated in the meeting.

The process of implementation of the recommendation established by the European Commission on deoligarchization will be led by the Legal Issues Committee.

Zurabishvili: Work on 12 Points Should Start in Brussels
The delegation of the Foreign Relations Committee of the European Parliament visiting Tbilisi met with the President of Georgia, Salome Zurabishvili.

The president stated that the visit is taking place at a very important moment for the country, emphasizing this visit could be decisive for the European future of Georgia.

“It may be even more important if we are granted candidate status by the end of the year after fulfilling the main recommendations, which we call the 12 points, and on which we have to start working. This work should start in Brussels, where I expect government representatives to go to clarify some details with the Commission,” said Zurabishvili.

The delegation is led by the Chairman of the Committee on Foreign Relations, David McAllister.

David McAllister: European Enlargement Remains a Merit-based Process that Requires Appropriate Reforms
“Georgia has reflected the goal of joining the European Union and NATO in its Constitution and this has a lot of support from the population. We, Members of European Parliament, will be happy to help and support the country’s accession,” McAllister stated.

The MEP explained that the population of Georgia, which supports Georgia’s accession to the EU, deserves to live in peace and security, in a free, democratic and prosperous country.

“I would like to emphasize once again the position of the European Parliament: That European enlargement remains a merit-based process that requires appropriate reforms, especially in the field of democracy, rule of law, human rights, market economy and implementation of the European Union. This applies to absolutely all countries that want to join the European Union and it can be no subject to trade. Georgia is being assessed based on these merits, and Georgia’s accession to the EU depends on its meeting the Copenhagen criteria. The people of Georgia, who support Georgia’s accession to the European Union, deserve to live in peace and security, in a free, democratic and prosperous country. The European Union is inextricably linked to peace, stability and prosperity,” said the MEP.

“When we talk about Georgia, unfortunately, we always remember one word, and that is polarization,” he noted, adding that Georgia must address certain priorities in order to receive candidate status.

“The visit to Georgia is one of the parts of our mission in the South Caucasus. We will meet with representatives of the Parliament and Government of Georgia, representatives of the Georgian Dream and the opposition. Of course, we will mainly talk about Georgia’s application for EU membership. Last month’s European Council decision was a truly historic decision, when Georgia was given a European perspective.

“We talked with Madam Zurabishvili about how important it is for all political forces to unite, put aside their differences, talk constructively and work to achieve one goal – to receive candidate status for European membership. Polarization is a process, a political discourse characterized by very harsh rhetoric and inability or unwillingness for people, opposing political parties, to work together. The European Union has always called on the conflicting parties to somehow reach an agreement on the basic reforms, development of democracy and strengthening of the rule of law, which are so important for Georgia. Charles Michel is also involved in this process, and this shows the great support that Georgia has from the European Council,” McAllister said.

“The Georgian President also made very important statements and called on all parties to unite, which is very important in Georgia at this stage. We are very encouraged by the fact that serious efforts are being made regarding the 12-point plan. The ruling party, the opposition and civil organizations have presented their plans, which proves that the candidate status is a goal shared by all,” he said.