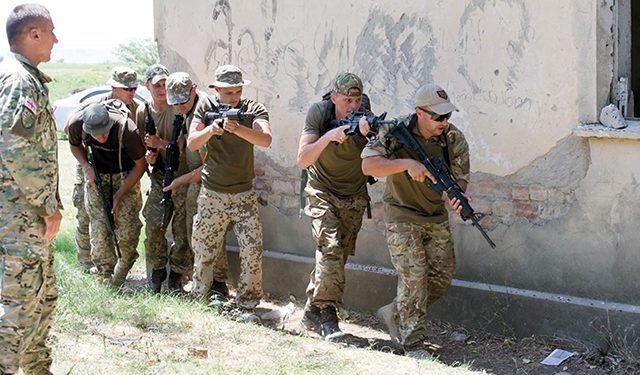 In the sprawling network of foreign relations, the aspect of military assistance and cooperation is often overlooked by smaller or more regional powers. Nations that don’t have such an immense defense infrastructure often tend to shy away from these overseas entanglements in favor of domestic issues. While this may be due to budgetary concerns, political shyness, or even an ongoing internal conflict, the opportunity to expand one’s national reach should never be an oversight.

Georgia finds itself in this position. As a regional power in the South Caucasus only, with little influence and activity outside of this area, they have largely abstained from foreign endeavors. With notable exceptions of NATO missions, the occasional training operation in Africa, or training exercises with regional neighbors, Georgia keeps to itself.

Two new additions to the United States Army and the British Army could prove to be excellent blueprints for a new Georgian pilot program. These units have the unique mission of engaging with foreign allies and their militaries by helping to train, assimilate, and bond with them for long-term cooperation. These relationships, kept warm, can pay dividends should the need arise for cooperation on the battlefield in future conflicts.

The first of these is the American’s Security Force Assistance Brigade (SFAB). Founded in 2018 as a new component of the United States Army, their outlined mission is “to conduct training, advising, assisting, enabling and accompanying operations with allied and partner nations.” These units are seasoned members of the Army, further trained in specific advisory skills. At a total size of approximately 800 soldiers, they deploy in small contingent teams to areas assigned globally.

These teams contain a multi-functional 12-soldier team. Each member specializes in a particular field, such as medical, logistics, intelligence, and explosive ordnance disposal. The skills they bring to their partner nations are invaluable to increasing their capabilities, particularly as most of these partner countries are not inherently strong enough to defend their own nation.

These “weak states” may not be able to afford a large defense force or may be susceptible to corruption. Imparting these skills, modernization, and positive morals and ethics is imperative to keeping these corners of the globe under good governance. Keeping these vulnerable nations within a sphere of influence that is friendly and progressive is immeasurably valuable for any host nation.

Great Britain has also taken steps to engage these smaller partner states. The UK’s new Ranger unit takes the concept a step further, as it is “based on four Infantry Battalions but selecting personnel from across the Army,” according to the UK Ministry of Defense. While they were only founded in December 2021, they are planning to be fully active later this year. General Sir Nick Carter, Chief of the UK Defense Staff, said the unit will be specific for use with foreign nations, and will specialize in “relevant culture and locality.”

These units are the leading edge in a new concept for global defense actors. A small but highly capable force specifically designed to cultivate a well-trained and motivated allied force anywhere in the world is imperative. Georgia’s opportunity to join this initiative is becoming apparent.

For Georgia, this model shapes into a slightly different image. The disparity in size between the US and UK armed forces and that of the Georgian Defense Forces is stark. Despite this, there is still a place for the nation at the global table of security actors. A small contingent of veterans, further trained in cooperative efforts abroad, could allow the country to ascend in status and become an invaluable asset to NATO.

For the Georgian Army, this would involve a similar selection process to that used in the US and UK. Soldiers with notable time in service and experience on overseas missions would be the primary target for selection. These veterans would be assessed in a battery of physical, psychological, linguistic, and problem-solving examinations. With a selection of suitable candidates, a company of 100-200 program volunteers would be formed for experimental review.

Over the course of several months, this unit can be partnered with existing assistance units. The Georgian foreign assistance unit can gain valuable experience alongside NATO units such as the US Army’s SFAB units operating across the globe. Additionally, as this unit matures, it can also be used to expand the operational knowledge of Georgia’s own military. The unit, over time, could become a lightning rod of experience, knowledge, and innovation.

As Georgia becomes more of a leader in regional defense and security, the opportunity to elevate this prestige should be claimed. While budgetary concerns can be addressed, it is likely that those UK and US partners can be harnessed. As these units have already pioneered this path, using their resources, including potentially sending officers to these programs, can be realized.

Making the nation an invaluable asset to NATO and other partner nations brings more positive attention to Georgia. This attention can bring a new wave of opportunities for collaboration, growth and innovation for not only the defense forces, but the nation overall. This program can be a catalyst for Georgia to be the global player they deserve to be.