Georgia’s European Way – Conflicting Messages ahead of the Vote 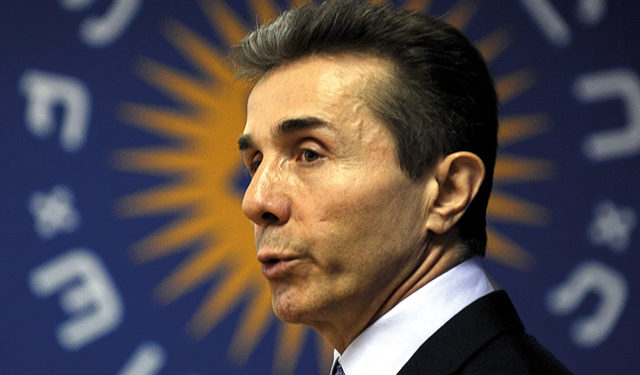 “We are deeply concerned about the destructive role that oligarch Bidzina Ivanishvili is playing in Georgia’s politics and economy, as well as the control he exercises over the Georgian government and its decisions, including the politically motivated persecution of journalists and political opponents,” the statement read. “We urge the Council and the Democratic Partners to consider imposing personal sanctions on Ivanishvili for his role in worsening the political process in Georgia.”

The debate on the resolution was held in the European Parliament. MEPs expressed concern over the deteriorating media situation in Georgia and the security of journalists, intimidation, threats, violence and persecution against journalists.

They called on the Georgian authorities to adhere to the criteria necessary for EU membership, including the Rule of Law, the independence of the judiciary, and freedom of the media.

“Bidzina Ivanishvili’s style and approach to this case is to keep calm. This calmness comes to our team as well, so as to allow us to approach the case academically,” said Kipiani.

“Why do we want Europe? Why do we want to return to the family where we belong, where there is truth and justice, but where unjustified and false decisions are made? It is immoral to be told that a high standard of media and democracy was the standard of Saakashvili-Gvaramia. This is an insult to the Georgian people,” he said.

“It is quite clear that it has nothing to do with truth, European values or objectivity. When we say that our place is in the big European family, we mean the truth and development of democracy. The decision, dictated by a narrow political prism, directly hits on the values on which European democracy stands. It is completely incomprehensible to me, and I would say it is immoral, to say that the high standard of democracy and media was the standard of Saakashvili-Gvaramia, who directly attacked the media, physically abused it- there was zero pluralism in the media at that time and not a single critical voice was heard. Mr. Ivanishvili is the one who defeated that regime and gave new life to the development of this country, laying the foundation for justice,” Gudushauri said.

Prime Minister Irakli Garibashvili stated that he protests the critical resolution on Georgia because its content is “offensive.”

Dream MP Dimitri Khundadze noted that if Georgia receives the status of an EU candidate with unjust commitments like the unjust allegations reflected in the resolution, then the country should “give a fair refusal in response.” Khundadze said he believes that the resolution was an insult to the Georgian people and that “he has never seen such an unjust Europe during the period of Georgia’s independence.”

The MP said that “no status is worth giving up the dignity of the country for.”

Public Defender Nino Lomjaria in turn stated that the Georgian authorities (government, parliament, judiciary) violate the Constitution of Georgia when they do not fulfill their commitments to the European Union to implement democratic reforms.

The Georgian President, who also took part in a discussion entitled Women in Conflict, highlighted the presence of Russia’s occupation troops only 40 kilometers from the Georgian capital of Tbilisi.

“The paradox is obvious – such things can’t be done to a close country and close people. Women and children are dying every day. Women are the first victims of conflicts and, in Georgia, we have experienced such conflicts…Ukraine deserves our complete admiration and I want to deliver a message to Ms. Zelenska of solidarity from all Georgian women.”

“My family experienced the first Russian, Soviet, occupation themselves. When Russian soldiers stand 40 kilometers from the Georgian capital, you can never say never. This is a very clear threat. It is a danger not only for Georgia, but for all European countries. What was not done during the Russian aggression in Crimea and Georgia must now be done or even partially done – the EU and European leaders have recognized the real face of Russia and Russia’s real goals, and now Russia must be held accountable, and the answer is only one: the European Union and EU integration,” she said.

Opposition MP Grigol Vashadze stated, “If they think that Georgia does not deserve any European perspective under this government, then they will reject us. I expect that in the best case, we will get the Albanian version: they will send us a list with dates and tell us, ‘those things need to be done if you want to return to the European family, as you have been claiming for so many years,’.”

Leaders of European Parliament Political Groups Call on Council of EU to Decide on Application of Ukraine, Moldova and Georgia
The following is a joint statement of the EP political groups’ leaders addressed to the heads of state and government of the EU meeting on 23-24 June.

“We, the leaders of the Political Groups of the European Parliament, appeal to the Heads of State and Government meeting on 23-24 June to decide on the applications of Ukraine, the Republic of Moldova and Georgia to accede to the European Union.

“The European Union must show courage, resolve, and vision in today’s context of a brutal war of aggression against our European neighbor Ukraine and a deteriorating international environment. The European Union must be a reliable partner and a credible geopolitical actor that lives up to its principles and values by showing solidarity with those who stand up for the same ideals.

“Ukrainian citizens wish to live in a free, democratic and prosperous country that is a proud and committed member of the European family. We acknowledge that those aspirations are shared by the people of Georgia and Moldova, and by the countries of the Western Balkans, whose expectations should not continue to be neglected.

“That is why we strongly appeal to you to grant EU candidate status to Ukraine and the Republic of Moldova, in line with Article 49 of the Treaty on the European Union and as the start to a merit-based process, and to work towards granting the same status to Georgia, fulfilling the legitimate aspirations of the Georgian people.

“We recall at the same time that the long-standing commitment of the EU towards the Western Balkans is maintained.”

The European Commission will recommend granting Ukraine official status as an EU candidate country, according to several officials familiar with deliberations that took place during a debate among commissioners on Monday, POLITICO reports, adding that the commissioners are generally supportive of Moldova, but are less confident about Georgia.

“Moldova and Georgia have also applied for candidate status, and officials said that commissioners were generally supportive of Moldova, where a staunchly pro-EU government is now in place, but that they were less confident about Georgia, which has suffered from pervasive political turmoil and notable democratic backsliding in recent years,” reads the article.

Papuashvili: Distinguishing any Country Would Be the Wrong Political Message, Approach Must Be Equal
The Speaker of the Parliament of Georgia, Shalva Papuashvili, stated that there are talks that making a positive decision toward the three countries is under question, but noted that it is difficult even for experts to make predictions.

“The only thing I have heard these days and during my visit to Brussels is that distinguishing any country would be the wrong political message to send. The approach must be equal, especially now that a decision is being made in an accelerated mode; distinguishing between countries would not be the right or fair approach on the part of the EU,” Papuashvili said, noting that all three countries need political solidarity and this will serve as a political message for Russia.

“I am convinced that Europe will make the decision with values that imply solidarity, support, and at the same time a bold message for Russia,” Papuashvili said.