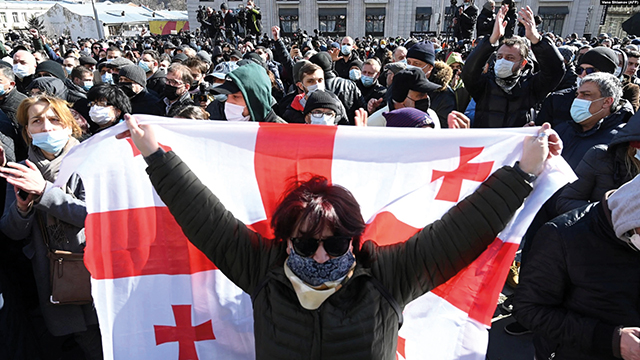 The political opposition may not be measured with the same yardstick in every country. Its level and extent is marked with a circumstantial character, depending on specific situations and the state of affairs in a nation. In some, their opposition is desired and tolerated, and in others it is repressed and rejected, all in accordance with the level of democracy or dictatorship in the system. Opposition as such is the reflection of one or many critically poised political forces on a wide range of developments on the daily agenda of a nation, as suggested by the current leadership of said nation.

In our multiparty country, the entire political spectrum, including hundreds of political groupings, has been criticizing the political force in power passionately and incessantly at all stages of Georgia’s 30-year existence as an independent nation. Opposition here is double-edged: parties against each other, and all of them in concert against the sitting government: noisy speeches, mendacity, manipulation, bitterness, intimidation, vote-buying, coercion, fabrications, false promises, brutality and aggression in the streets and on the floors of Parliament and, of course, on social media- all this used as the choice tools of a struggle wrapped in flagrant political deception, in addition to a certain number of fair demands and slogans meant to correct the governmental moves and measures.

For voting purposes and even for further national leadership, our local political soil and electoral psychology are often prone to seek out a political figure with the wondrous ability to bring about a drastic revolutionary modification to the life of society, based on the idea that they will introduce some unexpected sociopolitical or economic novelty. In the last 30 years, this nation has been through the hands of such messianic personalities many times, and all of them have ended up in exile, jail, or forced retirement.

We are a nation of self-confidently speaking leaders, not of diffidently listening followers. Even those squeezed faceless into the thick of protesting crowds carry the charge of a leader harbored inside a temporarily restrained political animal.

Although the democratic process is very loud and obvious in Georgia, it still lacks maturity and is still ridden with undemocratic tendencies and attitudes. The typical Georgian seems loathe to give up that love of power which seems to be an inborn streak of greed for leadership. Here prevails the ever-present suspicion of election rigging, which was either a conviction acquired at the very beginning of our independence and kept, or which is an abused instrument in the fight against the government, who is technically responsible for taking the country through the painful electoral process.

One of the strongest determiners of the outcome of elections and the effective influencers of votes in Georgia is social media, not just the conventional means of mass communication like TV, Radio and Press. It is likely that two million out of the entire population of 3.8 million people in the country are well versed in the internet means and ways, and are involved in the universal talk of the country, being politically active, sharp-tongued participants in the process, bisected into two opposing political camps – that of the opposition and that of the ruling party. We love to freely express our political opinion and have it registered on social media, which guarantees a higher level of participation in the political process. This means that the Georgian political opposition is mainly built in the social media space, full as it is of opinions, attitudes, judgments, evaluations, approaches and outlooks, where very often misleading thoughts are expressed and spread, conducive to threatening the political process with subversion and erecting unwanted obstacles for the governmental performance in leading the nation.

Hence, against the background of frank oppositional disapproval, the stimulation of sympathy towards the government and building up of public support becomes almost impossible, even if the media, supporting the administration, tries very hard. The political discourse, based on technological progress in Georgia, is nonstop and widespread, which is good, provided the passions and overly harsh usage of language is reduced and logic and reason are promoted in the ever-growing onslaught of the opposition on the government, inflicted as it is with more headaches than it can possibly endure.