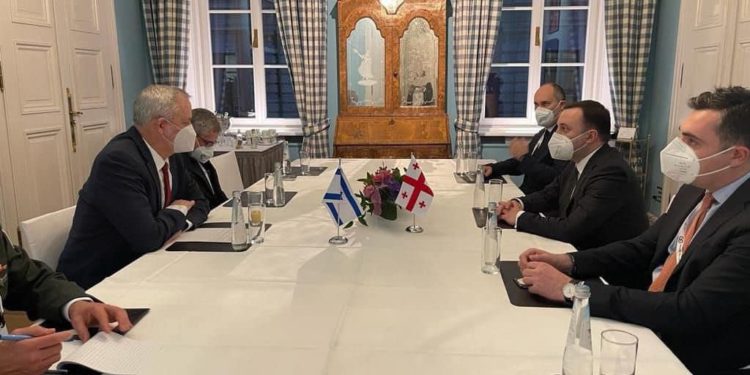 “I had a fruitful visit to Munich, to the 58th Security Conference, where I was personally invited by the Conference President, Wolfgang Ischinger,” Georgian Prime Minister Irakli Garibashvili stated following his participation in the Munich Security Conference. “I held meetings with political leaders, as well as representatives of the business community and the leaders of the largest companies. It was a priority for us to use the platform of the Munich Security Conference to reaffirm our European and Euro-Atlantic aspirations. Against the backdrop of security challenges, we reaffirmed our strong support for our Ukrainian friends, as well as discussed ways to defuse the situation with our international partners. The economic meetings held during the visit were very important, because the development of our country, increasing its attractiveness is one of the important levers to attract as much foreign direct investment as possible, strengthen the economy and become a regional hub.”

The Head of the Georgian Government was personally invited by MSC Chairman Wolfgang Ischinger to participate in the event.

On the margins of the conference, the Prime Minister held high-level bilateral meetings both on a political level and with business community representatives and the executives of some of the largest companies, the government administration press service reported.

On February 18, the PM met with Jigsaw-Google CEO Jared Cohen.

The meeting focused mainly on the special importance of developing technologies as one of the best ways to combat disinformation and cyberthreats.

During the meeting, the PM emphasized Georgia’s beneficial business environment, some of the lowest tax rates, the country’s leading positions in the world’s reputable rankings, and the opportunities offered by Georgia to investors. He underlined the country’s potential for developing information and internet technologies, and Georgia’s advantageous location.

Garibashvili offered Jared Cohen to set up a regional hub in Georgia and invited Jigsaw-Google’s delegation to familiarize themselves with venues of cooperation on the ground.

As part of the Conference, the PM also held a meeting with Benny Gantz, Vice Prime Minister/Defense Minister of the State of Israel.

The meeting emphasized the dynamically developing partnership between the two countries.

The parties pointed out the year 2022 as special in that it marks the 30th anniversary of diplomatic relations between Georgia and the State of Israel. According to the parties, the two countries enjoy strong, exemplary relations grounded in the shared values of democracy and human rights and setting the stage for furthering their partnership.

The meeting also revolved around the situation in Georgia’s occupied territories and the region’s security environment. The Vice Prime Minister of the State of Israel reaffirmed Israel’s firm support for Georgia’s territorial integrity and sovereignty.

The meeting focused on prospects of bolstering cooperation and partnership across a variety of areas, including economy and tourism. The PM noted that the Georgian Government welcomes Saudi Arabian FDIs and is ready to continue supporting interested investors in implementing large investment projects in Georgia. The parties singled out Georgia’s stable and favorable business environment and opportunities offered by FTAs with a number of countries. The parties also shared their views on regional security.

Within the framework of the conference, the PM held meetings with Sam Bankman-Fried (aka SBF), Founder and CEO FTX Crypto Derivatives Exchange, Christian Bruch, President/CEO of Siemens Energy AG, Kiril Petkov, Prime Minister of Bulgaria, and Róbert Vass, Founder and President of GLOBSEC, to discuss development prospects of bilateral and multilateral relations.