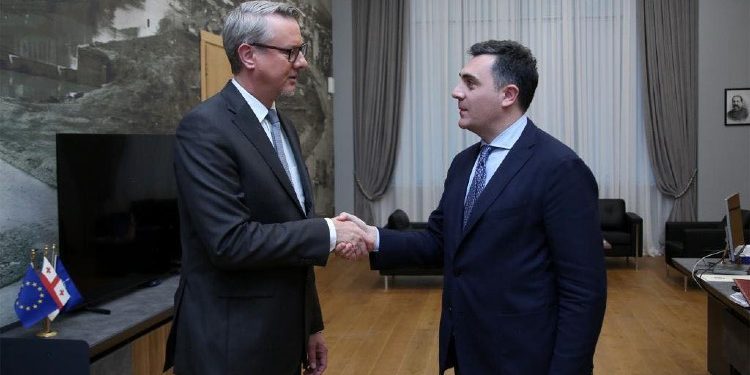 The Georgian Foreign Minister, Ilia Darchiashvili, held a farewell meeting with the EU Ambassador to Georgia, Carl Hartzell, as the latter’s diplomatic term in the country is coming to a close.

The sides highly appraised the dynamics of the EU-Georgia  relationship in recent years.

“Special attention was paid to the EU Council’s historic decision to grant Georgia a European perspective. Georgia’s success on the road to European integration was emphasized. It was highlighted that Georgia has already taken important steps in this direction, including through the successful implementation of comprehensive reforms.

“The country maintains an advanced position, according to various international ratings and standards. It was emphasized at the meeting that Georgia will continue to strive for further success on the path of European integration, including by pursuing its ambitious reform agenda.

“Ilia Darchiashvili expressed the hope that Georgia’s progress and ambitious reforms in various areas will be properly recognized and appreciated by European partners.

“Special mention was made of the EUMM’s  important role in this process.

“The sides also discussed the security and humanitarian situation in the occupied territories of Georgia. Carl Hartzell once again confirmed the European Union’s strong support for the territorial integrity and sovereignty of Georgia.

“At the end of the meeting, the Minister thanked the EU Ambassador for his work and wished him success in his future endeavors,” reports the press service of the MFA.