Georgian Dream and the Opposition on the Topic of EU Candidacy 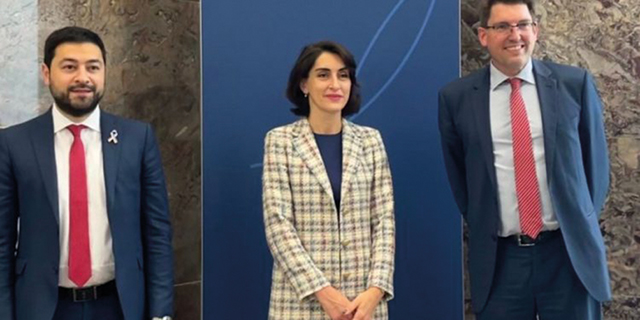 This week, the Chair of the EU Integration Committee, Maka Botchorishvili, and the First Deputy, Levan Karumidze, met with the Head of Group 51 in the Federal Chancellery of Germany, Edgar Lenski, Director for Eastern Europe, Caucasus and Central Asia at the Ministry of Foreign Affairs, Matthias Lüttenberg, and the Head of the EU Foreign Relations, Neighborhood Policy and Enlargement Department, Laura Ahrens.

The parties discussed Georgia’s EU membership application, the progress of the country on its EU integration path, the security challenges in the region, the Russian occupation of Georgian territories, and the creeping annexation.

Botchorishvili put an emphasis on the successful implementation of the majority the reforms envisaged under the Association Agreement, noting that Georgia aspires to further approximate to EU standards. She underlined the importance of a clear EU membership perspective and the granting of candidate status to Georgia, Ukraine and Moldova against the background of the Russian military aggression in Ukraine, and stressed the importance of a clear political supportive message from the EU to these countries.

She thanked the German diplomats for their intact support to the democratic development and EU approximation of Georgia. The German colleagues gave a positive assessment of the EU integration steps taken by Georgia and the timely filling out-up of the Questionnaire. They reaffirmed the unwavering support of Germany to the European aspirations of the country.

Georgian Dream vs the Opposition on the Topic of EU Candidacy
Chairman of the Georgian Dream, Irakli Kobakhidze, stated that they have information that “certain politicians” from the radical opposition are campaigning against Georgia’s candidacy in the European Union.

“This is a given fact, which is not new. We remember the same thing about the visa liberalization. They were not successful then, and we hope their latest campaign will be just as unsuccessful,” he said.
Vice-Speaker Archil Talakvadze also spoke on the topic, noting: “the public should be aware of the anti-heroes who are working against Georgia’s European perspective. There was exactly the same process during the discussion of visa liberalization.”

Roman Gotsiridze, a member of the United National Movement (UNM), claimed that it was the opposition who forced Garibashvili to file the EU application in the first place.

“We forced him to agree to our initiative, and as a result of pressure from the opposition, they were forced to file the application the very next day, despite the chairman of their party having said ‘the situation in Ukraine is different and Georgia will file the application in 2024,’” he claimed.

Looking to the EU for Recognition of Georgia’s Historical Place

The Minister of Culture of Georgia, Tea Tsulukiani, this week stated that she has high hopes that Europe, the European nations, and the leaders who rule the EU, will grant Georgia what “historically and fairly belongs to it.”

“I hope that they adhere to the ideology and values of the founding fathers who first created and founded the Council of Europe, the European Union that was born from the base of the Council of Europe. I hope that the current generation of European rulers will be loyal to these ideas and will grant Georgia what historically and fairly belongs to it. This historical justice not only includes the past, it is based on the present as well. We will get this status, of course, together with Moldova and Ukraine,” Tsulukiani said.

“More than 80% of our population support this idea that Georgia must become a part of the European family. And this is not a choice of our Government. It is a civilizational choice of the Georgian people,” Georgian Prime Minister Irakli Garibashvili stated during the discussion panel ‘Rethinking the EU’s Partnership with Its Neighborhood’ held within the scope of the Economic Forum in Davos.
He noted that everything will be done to make sure that Georgia gets closer to the EU and its ultimate goal of full EU membership.

“First of all, thank you for inviting us to Davos. This is a great opportunity to talk about Georgia’s aspiration to become a member of the European Union. Georgia has been a very reliable and loyal partner to the EU. This is a choice of our people. It does not belong only to the Georgian Government, but it is a choice, the civilizational choice, of the Georgian people. We share the same values and principles,” the PM said. “In 2014, we signed the Association Agreement, a roadmap for our ultimate goal, fully-fledged EU membership. Since then, we have had a Free Trade Agreement (FTA) and some tangible results, such as the Visa-Free Regime, which is very important to the Georgian citizens. Then we recently submitted the official Application for EU Membership.

GAKHARIA: This is an Unmissable Chance

Giorgi Gakharia, the leader of the party “For Georgia” released a statement Wednesday regarding Georgia’s application for EU membership status.

“Georgia has a historic chance to make an important step forward in the EU integration path and receive EU membership candidate status. Our country has been waiting for this chance since gaining independence and we cannot miss it,” he said.

“Regardless who is in the Government or who is in the opposition, regardless who and for what reason they try to harm the EU integration process, Georgia and the Georgian people deserve to become a full member of the European family, as our country has already paid a heavy price for its European choice,” he said.

“This was the goal of our ancestors and our history. This is a guarantee to restore our territorial integrity, build our national state, and freely and democratically develop our country. Europe has no alternative.

“We should all understand that the EU integration path is not an easy one and the results will not be achieved in a day. Granting membership candidate status will be just the beginning. The path will be complex, but, it is the choice of our people and our children, and failing to get the status will return us to the past.

“Important systemic reforms should follow the granting of the status. With this status, Georgia moves to a qualitatively new level. Important steps should be taken in various directions: Improvement of the elections system, combating corruption, an independent judiciary, economic and social development, human rights protections, and consolidation of democracy are among those directions.

“Membership in the European family is the only choice, making the country’s development and prosperity irreversible.

“Missing this historic chance is unacceptable, and the responsibility will be on everyone – but most of all, on the Government!

“Accordingly, I address the President of Georgia, the Parliament of Georgia, the Government of Georgia, political parties, non-government and civil organization, I also kindly ask our Church, to stand united, as only unity can protect the future of our children. If we cannot achieve this unity, in the coming few weeks, before the decision is made, let’s at least stop blaming each other so as not to harm the process.

“If Georgia fails to get the candidate status, we all fail, but the responsibility will be on the Government. Likewise, if the status is granted, the victory will belong to everyone and utmost to those heroes who devoted their lives to Georgia’s independence.”