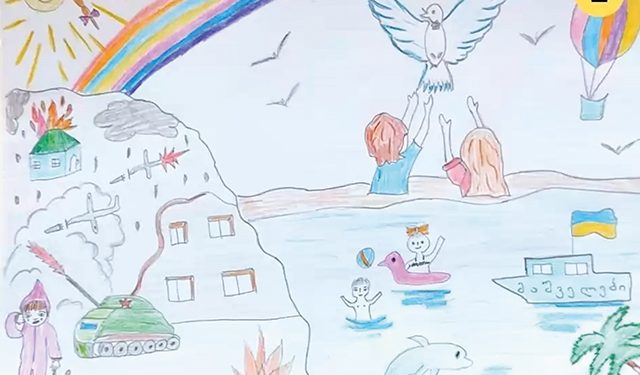 Dream on the boundless Black Sea, by Anna Dekanadze (9)

More than 130 inspiring artworks were submitted to the contest ‘Draw Your Black Sea Dream’, supported by EU4EMBLAS (European Union for Improving Environmental Monitoring in the Black Sea), a regional initiative funded by the European Union (EU) and implemented by the United Nations Development Program (UNDP) in Georgia and Ukraine.

The contest brought together over 130 schoolchildren from the coastal regions of both countries and helped them express their feelings about the Black Sea.

The war in Ukraine dominated artworks submitted by both Georgian and Ukrainian youngsters. Children from Ukraine pictured their hopes for peace and told a story of a war-stricken coastline where the threat of mines swept people away from once crowded beaches. Georgian children showed support for their Ukrainian peers and sent them a message of friendship and solidarity.

‘Sea. Life. Peace’, ‘No War!’, ‘I send you my love, peace and smile’, ‘The sea will fulfil our dreams’ – these emotional and heart-warming words enhanced the young artists’ visual messages.

The other focus of the contest was to protect marine biodiversity and save the delicate Black Sea ecosystem. The artworks showed that Georgian and Ukrainian children care about the marine environment. They want to protect their sea and keep it healthy and clean. Many drawings portray the abundance and diversity of life in the Black Sea waters. Some show people and sea inhabitants living in harmony and swimming and playing together.

Ten prize-winning submissions (five from Georgia and five from Ukraine) are available on the EU4EMBLAS website: https://emblasproject.org/

About the EU4EMBLAS project:
The EU/UNDP project “European Union for Improving Environmental Monitoring in the Black Sea” (EU4EMBLAS) is the fourth phase of the assistance project that has been running since 2014 with EU funding. The initiative is implemented by UNDP in close partnership with the governments of Georgia and Ukraine. It supports both countries to monitor and protect the Black Sea ecosystem. The current phase complements the need to further develop national capacities – technical and personal, to implement marine environment monitoring programs, in line with the Bucharest Convention and the EU reporting requirements. It provides technical assistance focused on establishing modern systems and facilities for environmental monitoring, capacity building, awareness-raising and the assessment of environmental status in line with the EU Marine Strategy Framework Directive (MSFD) and Water Framework Directive (WDF).