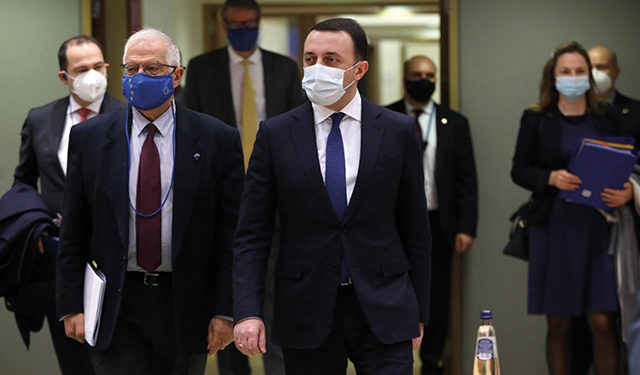 The Georgia-EU strategic partnership, progress toward European integration, the situation in the occupied territories, and the ongoing political process were the key issues discussed during Georgian Prime Minister Irakli Garibashvili’s two-day visit to Brussels this week.

“Charles Michel’s position is that in the shortest possible time, we will be able to find common ground and compromise,” Garibashvili said afterwards.

On March 16, the Georgian PM met with the Prime Minister of the Kingdom of Belgium, Alexander De Croo. They talked about the successful cooperation between the two countries.

The same day, another high-level meeting took place with European Commissioner for Neighborhood and Enlargement Olivér Várhelyi. The face-to-face meeting at the European Commission emphasized the importance of deeper economic and sectoral integration into the EU. The Georgian Government has an ambitious plan to apply for full EU membership in 2024, the Prime Minister noted, and political and economic reforms to that end continue.

The parties discussed challenges and difficulties brought about by the COVID-19 pandemic. The PM underlined the EU’s invaluable support in the fight against the social and economic consequences of the pandemic. The importance of vaccination was singled out, as was the need to ensure equal access to the vaccine for all countries.

All key directions of the bilateral agenda were discussed, while challenges in Georgia’s occupied territories and the arrests and illegal detention of Georgian citizens were singled out in particular.
The European Union and Georgia held the 6th meeting of the Association Council on March 16. The Association Council took note of the 2021 Association Implementation Report on Georgia and assessed the state of EU-Georgia relations since the last such meeting in March 2019.

The Association Council welcomed Georgia’s progress on its European path, including in the challenging COVID-19 context.

It noted that the elections of 31 October and 21 November 2020 were competitive and that, overall, fundamental freedoms were respected, but that it strongly regretted the deepening political polarization in Georgia. They called for a swift resolution to the ongoing political situation, for all parties to step up efforts to to work together and to maintain open dialogue, including with civil society.

After the meeting of the Association Council, Garibashvili made the following statement at the briefing, responding to one of the main demands of the opposition regarding holding snap elections:

He also answered questions regarding the political prisoners: “Being a politician does not make anyone immune to prison. If anyone has committed a crime, he should be punished. Therefore, it is not up to me to decide when or how someone will be released from court.”

On March 17, Garibashvili met with the Head of the South Caucasus Delegation of the European Parliament, Marina Kaljurand, to discuss the geopolitical situation in the region and the security challenges in the occupied territories.

The PM also had a meeting with the President of the European Parliament, David Sassoli, during which the sides discussed the current political processes in Georgia. The Prime Minister once again thanked the EU for its efforts to manage and de-escalate the ongoing processes in the country in a constructive manner. It was underlined that the final report of the OSCE/ODIHR EOM assessed the parliamentary elections in Georgia as competitive and stated that, in general, fundamental freedoms were protected.

On March 17, the Head of the Government of Georgia was also hosted by the Secretary General of the Alliance Jens Stoltenberg at the NATO Headquarters.

The meeting emphasized the successful cooperation between NATO and Georgia and the refreshed Substantial Package designed to assist Georgia in cementing its resilience, and to offer new opportunities for cooperation with the Alliance.

The parties also discussed the importance of Black Sea security and Georgia’s role in this direction, with special emphasis being placed on the region’s new geopolitical landscape and Russian threats as a major challenge for Euro-Atlantic security. The parties spoke about security challenges in Georgia’s occupied territories, and Stoltenberg reaffirmed strong support for Georgia’s territorial integrity and sovereignty.

“NATO membership is a top priority of Georgia’s foreign and security policy, and it is so important that it is reflected in our Constitution,” Garibashvili highlighted afterwards. 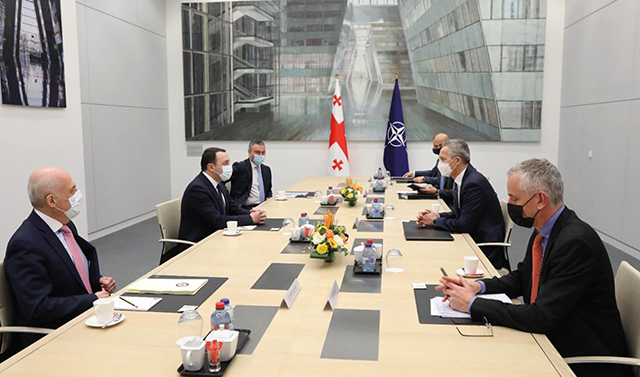 Stoltenberg later spoke about the concerns within the Alliance regarding the recent political events in Georgia, including the detention of the chair of the “National Movement” Nika Melia. He emphasized that the Alliance is based on the rule of law and democratic values, and as such, they call on Georgian politicians to find a way out of this difficult situation in order to be able to continue reforms to deepen European integration.

Stoltenberg added that NATO supports the mediation efforts of the European Union. He called on Garibashvili to work with the opposition to find a common solution to the crisis.

Another important meeting, this one between the PM and Chair of the European Parliament Foreign Affairs Committee, David McAllister, saw the two discussing the country’s ongoing political processes and the EU’s mediation, with special emphasis on the need to achieve a compromise and channel the process into Parliament.

At the end of his official visit to Brussels, the PM noted that all friends and partners of Georgia agree and recommend that the political parties must find common ground.

“I met with MEPs, held very productive meetings with our friends, those taking a keen interest in Georgia’s better tomorrow. Everyone’s shared, consolidated recommendation is that political parties must find common ground, and we must all continue a political life together in Georgia’s Parliament. Everyone agrees to this position, and no-one has voiced a different position. I had productive talks with Chair of the Foreign Affairs Committee David McAllister and other friends of our country who have an earnest interest in the future of our country,” Garibashvili concluded.