Georgia, Ukraine and European Security in the Spotlight at the NATO Madrid Summit 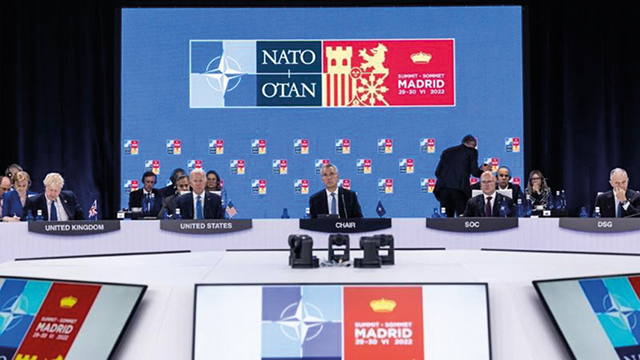 The security of countries aspiring to become members of the Alliance is intertwined with our own. We strongly support their independence, sovereignty and territorial integrity, – reads NATO’s new Strategic Concept.

The new Strategic Concept notes that the Alliance reaffirms the 2008 Bucharest Summit decision as well as all subsequent decisions with respect to Georgia and Ukraine.

“We will strengthen political dialogue and cooperation with those who aim to join the Alliance, help strengthen their resilience against malign interference, build their capabilities, and enhance our practical support to advance their EuroAtlantic aspirations. We will continue to develop our partnerships with Bosnia and Herzegovina, Georgia and Ukraine to advance our common interest in Euro-Atlantic peace, stability and security. We reaffirm the decision we took at the 2008 Bucharest Summit and all subsequent decisions with respect to Georgia and Ukraine,” reads the document.

The new NATO concept first names Russia as a threat. The last strategic concept of the Alliance, adopted in 2010, said that cooperation between NATO and Russia is of strategic importance because it promotes a common space for peace, stability and security, and NATO does not pose a threat to Russia.

Britain to Allocate £5 Million to Georgia to Protect Against Russian Cyberattacks
“The people of Georgia live every day on the frontline of Russian aggression. Putin cannot be allowed to use Georgia’s sovereign institutions to sharpen the knife of his cyber capability,” said Prime Minister of England Boris Johnson at this week’s NATO Summit.

As emphasized on the official website of the British government, Russia has long used Georgia as a testing ground for its cyber capability. This began in 2008 when some of the world’s first coordinated cyber attacks were used to cripple the country’s security architecture while Russia carried out its illegal annexation of South Ossetia and Abkhazia.

It was noted that more than £5 million of additional funding marks the next phase of UK cyber support for Georgia. This will allow the Georgian National Security Council to deliver their new cyber security strategy – identifying and repelling attacks from those seeking to undermine both Georgian and European security. As noted, the UK will also work directly with the Georgian Ministry of Defense to bolster their cyber defenses and capability.

It was emphasized in the statement that Ukraine and Georgia have experienced the terrible consequences of Russian military aggression, both directly on their territories and indirectly through cyber and other attacks, in the last fifteen years.

UK bilateral support for Georgia’s cyber security will be complemented by an additional package of tailored support from NATO which will be agreed by leaders in Madrid, focusing on increased defense training.

“The UK has world-leading cyber prowess and the support announced will protect not just Georgia, but also the UK and all other free democracies threatened by Russian hostility,” stated Johnson.
The Prime Minister of Georgia Irakli Garibashvili met with the Prime Minister of the United Kingdom Boris Johnson on Wednesday during the NATO Summit in Madrid.

The Georgian PM thanked the UK PM for his unwavering support for Georgia’s sovereignty, territorial integrity and Euro-Atlantic integration, and expressed hope that the partnership would further deepen in the wake of democratization and reform.

Degnan: Work Done to Promote EU Candidacy will also Benefit Georgia’s NATO Membership
“I think the Madrid summit was also an opportunity for Georgia to regalvanize around the steps that Georgia needs to take. Many of them are the very same kinds of reforms that are being called for for Georgia’s European Union candidate status. So, the work that’s done to promote to the EU membership candidate status will also benefit Georgia’s NATO membership process, because these are the same kinds of political and democratic reforms,” US Ambassador to Georgia, Kelly Degnan, told reporters.

She noted that Georgia is a very strong partner of NATO and that is shown by the high-level delegation that attended the NATO Madrid Summit.

“It’s important to remember that NATO is a political-military alliance. That means it has military standards that must be met as well as political standards. And the United States and allies stand ready to assist Georgia as we have to make progress toward that membership,” said the Ambassador.