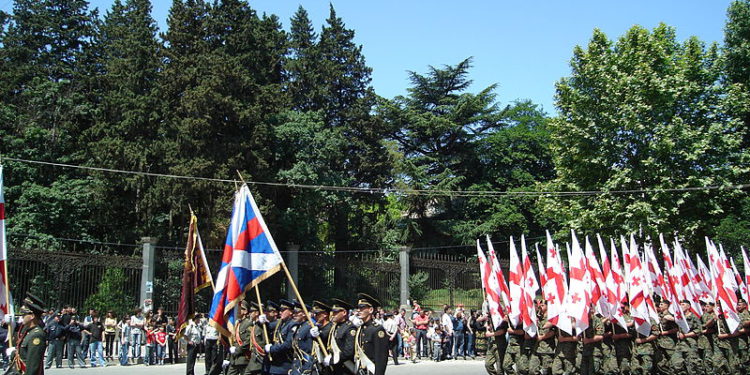 Tomorrow, May 26, marks Georgian Independence Day. The country celebrates 103 years since the adoption of the Act of Independence amidst the chaos of the 1917 Russian Revolution.

Due to the global pandemic, large-scale events marking Georgia’s Independence Day will not be held this year. On this occasion, state agencies have planned small-scale events of various formats.

The general rehearsal of the event dedicated to the Independence Day of Georgia is being held on Freedom Square in Tbilisi.

“Today, the units of the Defense Forces are holding a general rehearsal for May 26. I would like to congratulate the entire country on May 26 and especially the personnel of the Defense Forces in advance, because it is the unit that ensures the protection of the country’s sovereignty. I would also like to mention that tomorrow 247 recruits will take the oath.

“This year, due to the global pandemic, we have to celebrate this important date in a different format. Large-scale events will not be held on May 26 this year to avoid crowds. However, various armored vehicles will be presented at the event, and the event will be closed by the flight of Su-25 jet aircrafts,” said Chief Sergeant of the Defense Forces Giorgi Gogochuri.

The organizer of the event, Tata Svanidze, says tomorrow’s events will be broadcast live.

At 14:00, the memorial service of Georgia’s national hero, commander-in-chief of the first Democratic Republic of Georgia, General Giorgi Kvinitadze, will be held at Trinity Cathedral in Tbilisi, after which his remains will be laid to rest at the Mtatsminda Pantheon of Writers and Public Figures.

At 20:00, a gala concert dedicated to the Independence Day of Georgia will be held at the Opera and Ballet Theater, which will also be broadcast live.

The organizers of the event note that this year military swearing-in events will be held in places where it has never been before. For example, in Svaneti and at Paravani Lake – near Foka. Also, the swearing-in ceremony will be held in Mtskheta, Tbilisi, Adjara and Kakheti – near Nekresi. The ceremonies will also be broadcast live.