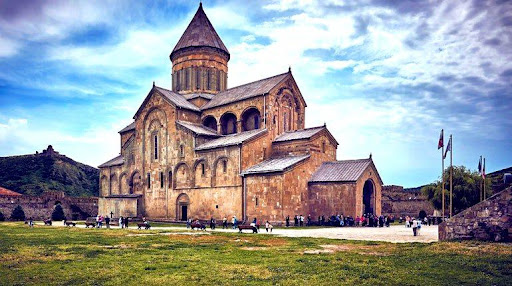 On October 14, Georgia celebrates Svetitskhovloba, a national holiday dedicated to the Svetitskhoveli Cathedral (“the Living Pillar Cathedral”) located in Georgia’s historical town of Mtskheta. The festival is also referred to as Mtskhetoba (celebrating the day of Mtskheta).

On this day, special religious services are held in churches throughout Georgia.

On October 14, the Georgian Orthodox Church also celebrates the day of King Mirian and Queen Nana, who reigned in the 4th century. They were the first monarchs in the country, who converted to Christianity.

Orthodox Christian pilgrims visit the country’s ancient capital city Mtskheta, just outside Tbilisi, to mark the annual day of the city and its historic cathedral.

According to tradition, the holy robe of Jesus is buried under the church. Elias, a Jew from Mtskheta, was in Jerusalem when Jesus was crucified. The story is that Elias bought the robe of Jesus from a Roman soldier and brought it back to Georgia. When his sister touched the robe, she was immediately overcome with emotion and died. The robe couldn’t be taken from her grasp, so they buried her and the robe in the church.

Svetitskhoveli translates as “the Living Pillar.” This name is due to a miracle that Saint Nino performed on pillars that were hewn from a cedar that grew at the location of the buried robe.

Throughout the centuries, the cathedral served as the burial place for kings. The present cross-in-square structure was completed between 1010 and 1029 by the medieval Georgian architect Arsukisdze, although the site itself dates back to the early fourth century.

A masterpiece of the Early and High Middle Ages, Svetitskhoveli is recognized by UNESCO as a World Heritage Site. It is currently the second-largest church building in Georgia, after the Holy Trinity Cathedral.