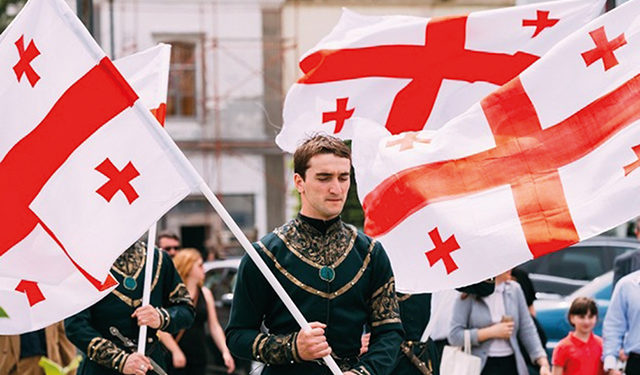 Georgia marks its National Flag Day on January 14, but large-scale events are not planned this year due to the COVID pandemic. The State Council of Heraldry calls on citizens to set and raise the national flag on their balconies or roofs to honor Georgia’s statehood.
The current flag was used by the Georgian patriotic movement following the country’s independence from the Soviet Union in 1991. By the late 1990s, the design had become widely known as the Georgian historical national flag.
A majority of Georgians supported the restoration of the flag, and in 1999 the Parliament of Georgia passed a bill to change the flag. However, it was not endorsed by the President, Eduard Shevardnadze. It was adopted in the early 2000s by the main opposition party, the United National Movement led by Mikheil Saakashvili, as a symbol of popular resistance to Shevardnadze’s rule, as well as a symbol of the Rose Revolution.
The flag was adopted by Parliament on 14 January 2004. Saakashvili formally endorsed it via Presidential Decree No. 31 signed on 25 January, following his election as President. 14 January is annually marked as Flag Day in Georgia.
“One of the main symbols of our statehood, the flag of Georgia inspires the patriotic spirit and great pride in each of us,” the Prime Minister of Georgia Giorgi Gakharia said in connection with the Day of the State Flag of Georgia.
The Prime Minister is convinced that the time is not far when this symbol of Georgian statehood will be erected next to the flags of the member states of the European family.