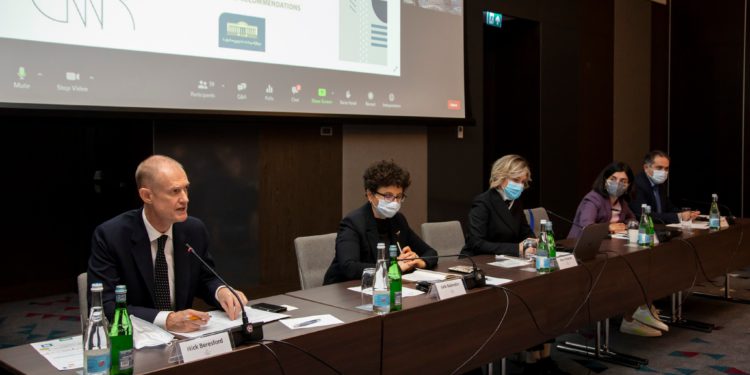 TBILISI. 21 March 2022 – The Parliament of Georgia released the 2021 edition of ‘Gender Equality – Barriers and Recommendations’ research that provides an overview of Georgia’s five-year progress in creating a strong legal framework for achieving meaningful gender equality.

This comprehensive document examines laws and policies adopted from 2017 through 2021 to promote women’s political and economic participation, eliminate gender-based discrimination and violence, and ensure the protection of women’s rights in the labor market and the healthcare and civil sectors. Its analytical insights and recommendations serve to inform gender-sensitive law-making in the coming years.

“Georgia is making progress towards protecting women’s rights in all spheres of life and bringing policies and laws in line with international standards, including the European Union directives. Our goal is to establish a strong legal framework to promote, enforce and monitor gender equality and prevent all forms of discrimination,” said MP Nino Tsilosani, Chair of the Gender Equality Council at the Parliament of Georgia.

“Analyzing the actual impact of laws and budgets through gender-sensitive scrutiny is an important step that the Parliament can take on the path to an equal society.  UNDP is proud to support this research that points out challenges and offers recommendations for making Georgia’s policies and laws gender-sensitive”, said UNDP Resident Representative in Georgia Nick Beresford.

„Georgia’s political agenda acknowledges the importance of Sexual and Reproductive Health and Rights of women and girls as the cornerstone for attaining gender equality. Despite the marking progress made in recent years, challenges remain to ensure full harmonization with international standards and best practices, in order to ensure the provision of quality services, collecting quality data, implementation of comprehensive sexuality education, etc. We must strengthen multisectoral effort to make sure that women and girls in Georgia are empowered and have universal access to reproductive health and rights,“ noted UNFPA Head of Office in Georgia Lela Bakradze.

“NDI has been supporting the work of the Gender Equality Council (GEC) to ensure that women’s voices are fully represented in the legislative processes. By raising the profile of gender equality in parliament, the GEC has made the parliament at large more aware of and attuned to gender issues. Despite notable progress, however, women in Georgia continue to face a plethora of barriers to equal participation in all aspects of life. It is imperative that parliamentary leaders and GEC devote more energy and resources to help parliament meet its objectives towards greater gender equality. This report provides a very detailed overview of gender policy-making and issues important recommendations to the Parliament and respective committees for 2022 and beyond,” said NDI Georgia Deputy Director Teona Kupunia.

“Georgia has made significant progress by strengthening anti-discrimination mechanism and passing laws prohibiting sexual harassment in public and the workplace. Also, the reform of the Labor Code gave new rights and protections to women in labor relations. In the light of the changes, efforts should be stepped up to remove barriers to ensure effective implementation of gender equality goals, as well as active coordination between relevant state and non-state agencies. The USAID Rule of Law Program is proud to support Georgia in promoting gender equality, gender responsiveness and non-discrimination, especially in Georgia’s justice system,” noted USAID Rule of Law Program Chief of Party Giorgi Chkheidze.

The research ‘Gender Equality – Barriers and Recommendations’ provides critically important information to the Parliament and assists Georgia’s legislative body to deliver on gender equality and human rights. The 2021 edition of this comprehensive document draws on a similar study conducted in 2018 to capture legislative and policy gaps across a range of fields.