GDP and Employment in Georgia: Forecasts for 2021

In 2020, the COVID-19 pandemic heavily disrupted the world, causing both a global health emergency and a global economic crisis. While almost every country and every sector have been affected, economies reliant on the service sector, and especially the tourism industry, such as Georgia, have suffered notably. Indeed, measures taken to contain the spread of the virus have had an especially negative impact on the economy. Preliminary estimates suggest a decline in Georgia’s real GDP in 2020 of 6.1%, the sharpest drop since 1994. Apart from international travel, receipts from which dropped by 81% in 2020, external trade in goods has also been affected significantly, with the trade turnover decreasing by 15%, as well as exports and imports falling by 12% and 16%, respectively. Unsurprisingly, Foreign Direct Investment (FDI) has also suffered significantly, with a 24% drop registered for the first three quarters of 2020, compared to the corresponding period of 2019. Georgia also recorded high Current Account and Budget Deficits in 2020 (9.7% and 9.1%, respectively), and its Debt to GDP ratio crept up to 59.9%. In addition, the Georgian Lari depreciated by 13% from the start to the end of the year. On a positive note, remittance inflows in 2020 increased by 9%. In addition, stability of the financial sector has been maintained. Overall, Georgia started 2021 with a crippled economy, and with COVID-related restrictions still in place. In this issue, we provide forecasts for the performance of the Georgian economy for 2021, namely regarding its real GDP growth rate, sector-specific growth rates, and employment.

Scenarios and forecasts
Levels of uncertainty have soared due to the ongoing pandemic, which makes accurate forecasting of economic growth nearly impossible. Presently, uncertainty for the most part comes from uncertain vaccination schedules, the dynamics of the spread of the virus, the possibility of a third wave of restrictions, and the recovery of international travel. Some other important factors here include changes to the patterns of production and consumption, and the continued political instability in Georgia. This multi-faceted uncertainty explains the sizable differences between various forecasts published by Georgian and international institutions, with forecasts for the baseline scenario of the real GDP growth rate in Georgia for 2021 ranging from 3.5% to 5.0%.

PMC RC has developed three possible scenarios with respect to the development of the crisis, each of which are outlined below.

Baseline scenario – This assumes that the economy will by and large manage to return to pre-pandemic long-term growth rates, however the impact of the pandemic will still be felt. This scenario assumes no further lockdowns and no third wave of the virus, while also assuming that the timeline of vaccination proceeds in line with the current plan, and that tourism enjoys a moderate recovery in the summer.

Optimistic scenario – This assumes that economic activity will recover faster than pre-pandemic growth rates. This scenario assumes positive developments such as accelerated global and local vaccination, and thus a better-than-expected recovery of the tourism sector.

Pessimistic scenario – This assumes that economic activity will only partially recover to pre-pandemic growth rates, with the impact of 2020 still having a huge toll. This scenario assumes negative developments such as laggard global and local vaccination, and thus worse-than-expected recovery of the tourism sector, as well as a possible third wave of the virus and further toughening of restrictions.

By considering the impact on each sector of the economy of Georgia2 in the three proposed scenarios, it is possible to forecast the real growth of the Georgian economy in 20213. If the baseline scenario proves true, Georgia’s real economy is expected to grow by 3.0%. Should the optimistic scenario play out, the Georgian economy is expected to grow by 5.4% while in the event of the pessimistic scenario becoming reality, the expected rise is 0.3%. 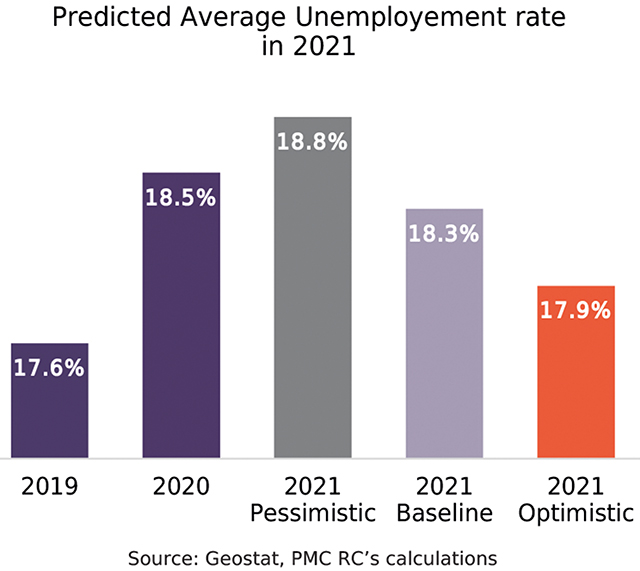 Based on these three estimated scenarios for 2021, we have conducted sector-specific analysis of GDP, and have compared our forecasts to the performance of each sector in 2019, before the pandemic hit. In addition to our forecasts, the following graphs also contain trend values3, specifically the values of GDP in each selected sector for 20204 and 2021 without the pandemic-related shock, compared to the GDP of 2019 in the given sector. It is worth noting that only a few sectors managed to slightly outperform their trend growth rates in 2020, namely agriculture, manufacturing, and public administration.

Accommodation and food service suffered the most among the reviewed sectors, with its GDP falling to 64% of its 2019 level. In the baseline scenario, this sector will recover to 82% of its 2019 level, while in the pessimistic and optimistic scenarios, this figure will be 75% and 89%, respectively.

The two most prominent sectors of the Georgian economy – wholesale and retail trade, real estate – together contributing 24% of total GDP in 2019. Trade sector is expected to nearly recover fully in all three scenarios, rising from 93% of the 2019 level in 2020 to 96% of the 2019 level in 2021 in the baseline scenario. However even in the optimistic scenario (98%) it fails to completely recover to 2019 levels. As for real estate, its decline was relatively low in 2020, dipping by just 2% compared to 2019. However, this could be attributed to the mortgage loan subsidy program targeted toward this sector, which ended in December 2020. Thus, we expect that a sizable part of demand for real estate in 2021 was absorbed by the subsidy program in 2020. In the baseline and pessimistic scenarios, the real estate sector’s GDP is forecast to suffer a further loss in 2021, declining to 97% and 96% of its 2019 level, respectively, while in the optimistic scenario, the sector will maintain its 2020 level. 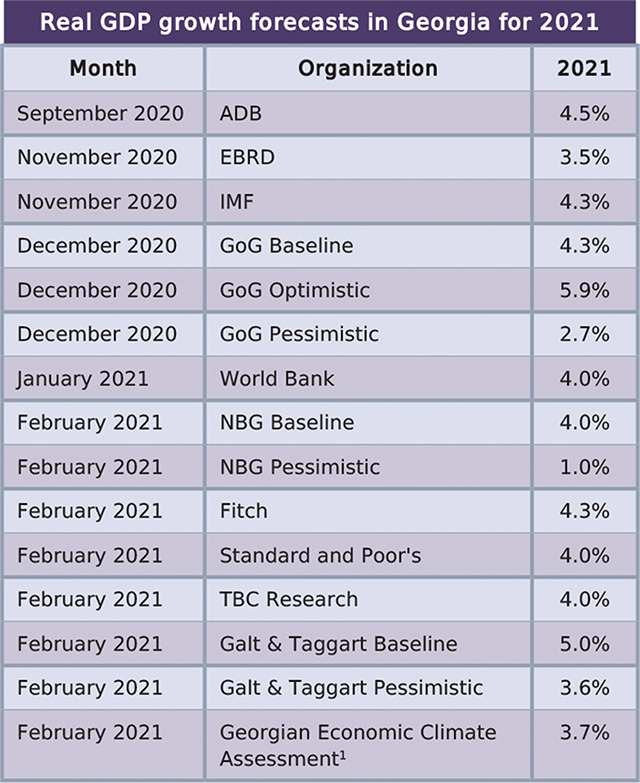 Even if the optimistic scenario proves true, the Georgian economy will still not fully recover to its pre-pandemic level. With the potential risks and uncertainties in mind, this scenario is unfortunately the least likely of the three. Thus, 2021 is unlikely to be a year of any sort of extraordinary recovery. Instead, Georgia should focus this year on addressing its health crisis, supporting vulnerable households and businesses, and, most importantly, laying the groundwork for rapid economic recovery and transformation in subsequent years.