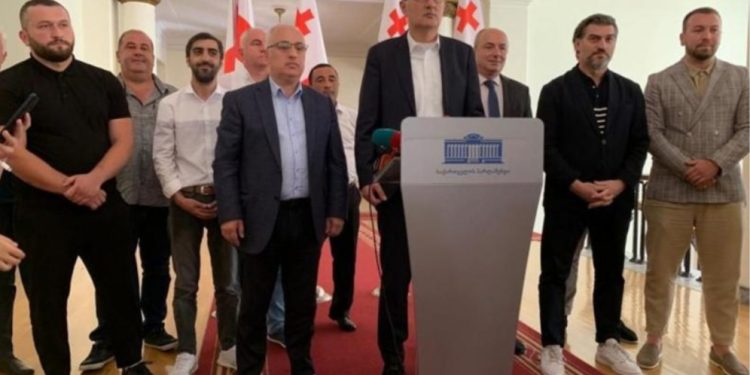 The members of the Parliament of Georgia, former Georgian-Dreamers – Sozar Subari, Dimitri Khundadze, Guram Macharashvili and Mikheil Kavelashvili – issued a statement once again responding to the US Ambassador to Georgia, Kelly Degnan, and note that the statements made by the Ambassador in recent days are “another confession”.

“We want to start our next appeal to the public by thanking the American Ambassador, Kelly Degnan. Trust us, there is no irony in this thanks. Our main goal is to bring to the public the truth that is hidden behind the scenes of Georgian politics. It is Ms Degnan who helps us the most in bringing this truth to the people, whose every new statement is another confession.

“With the last two comments of the Ambassador, it became clear once again who is really behind the radical agenda of the radical opposition. As it is known, the polarization created by the radical opposition rests on two main artificial pillars: it is the non-recognition of the domestic and foreign legitimacy of the current government of Georgia. To strengthen these pillars, the National Movement uses specific clichés, according to the “best” traditions of Soviet propaganda. Among these clichés, “Gavrilov’s night” and “unfair el­ections” have a special place. For the last few days, Ms Degnan has been talking to us with these messages made up by the National ­Movement, which is clear proof that these messages, as well as the problem of polarization, are planned by the Embassy.

“We won’t comment much on the so-called “Gavrilov­­’s night­”, we will only remember that on one side, Nika Melia, a favorite of the Embassy, ​​was breaking into the Parliament, and on the other side, another favorite of the Embassy, ​​Giorgi Gakharia, was shooting at people. Accordingly, if we were the Ambassador, we would talk very little about “Gavrilo­v night”. As it is known, words of wisdom are silver and silence is gold. When silver is so far from you, and gold is in front of you and you don’t use it for anything, it is, to put it mildly, a crime against the state which you have to represent with dignity in the partner country.

“Regarding the unfair el­ections: Ambassador Degnan said that no one evaluated the elections as fair, and people do not trust the results of the elections. It was here that Mrs. Ambassador let out the secret that the failed revolutionary scenario and the fake message of the radical opposition about unfair and rigged elections were written in the Embassy.

“The Ambassador should know very well that the OSCE/ODIHR and all other international monitoring organizations assessed both the 2020 and 2021 elections as “free and competitive, in which fundamental human rights were protected”, which is synonymous with the fairness of the elections. The term “fair” has not been used by the OSCE/ODIHR in its reports for a long time, which was also acknowledged by the then chairman of the board of ISFED in the parliamentary investigative commission. When the Ambassador repeats the message spread through the National ­Movement and has already been neutralized many times with arguments, it can be seen that artificially forming the perception of the illegitimacy of the government and the revolutionary mood is her own goal.

“Ms. Ambassador also noted that all the monitoring organizations were indicating to voter intimidation, vote buying, abuse of administrative resources and the so-called carousel. We would like to remind Ms. Degnan that all these topics have been thoroughly studied by the parliamentary investigative commission, including the heads of the monitoring NGOs. Finally, it was determined that none of the monitoring organizations had any solid facts about voter intimidation, vote buying or systematic use of administrative resources. Quite rightly, the fact that the local monitoring organizations used the word “alleged” every time when talking about the violations, thus completely removing the burden of proof, became a hot topic. If the OSCE/ODIHR and other international monitoring missions were pointing out the “alleged violations” listed by NGOs run from the Embassy, ​​this would not be a big advantage for the Ambassador. As for the so-called carousel, this term was not included in the OSCE/ODIHR report at all, and it is no longer a surprise to us that the Ambassador repeats this fake invented by the radical opposition.

“Another message of the Ambassador about the falsification of the results of the parallel counting of votes by ISF­ED was completely surprising. Ms. Degnan called the falsification of the parallel counting of votes an “insignificant statistical error” and said that the error was identified by ISF­ED soon. Society knows very well that one and the other are the heaviest lies. In addition, it is impossible for the Ambassador not to have information about this and to lie unintentionally.

“As for “insignificant statistical error”. The parallel counting of votes, aka PVT, has a margin of error of 0.7 percent, according to the ISF­ED methodology. This means that the difference between the official results of the elections and the results of PVT should not have been more than 0.7 percent. In the case of Georgia­n Dream, there was a 2.4 percent difference between the data of CEC and PVT, which meant that either the elections were rigged or PVT. Here we remind you that 2.4 percent is about 50 thousand votes, and the falsification of PVT with so many votes cannot be considered a minor statistical error by any mathematics. Naturally, based on the 2.4 percent margin of error, the radical opposition and the NGOs talked about election fraud, however, in the end it turned out that instead of the election, PVT was rigged.

“As for the fact that, as if, the mistake was identified by ISF­ED soon. The leaders of Georgia­n Dream spoke about the mistake of PVT for the first time at the November 3 briefing. After that, a number of meetings were held on the topic of PVT both with the leadership of ISF­ED and with the American side. The executive director of ISF­ED at that time also admitted on television that the Embassy had information about the error of PVT at least at the end of November. Under such circumstances, it is quite puzzling why PVT’s forgery was not recognized until December 11, and why the Embassy continued to moderate the negotiations between the parties when it was already fully aware of the forgery. The reason for all this is clear to us – the artificial political crisis and political negotiations, which were the result of the PVT falsification, were conceived and artificially wrapped up by the Embassy.

“Here, we remind you once again that together with PVT, ISF­ED falsified another data about 8 percent negative imbalance, which, according to ISF­ED’s conclusion, could even have an impact on the elections by 4.1 percent. In total, ISF­ED gave 45.8% of votes to Georgia­n Dream in the parallel counting of votes, and if we subtracted 4.1% from that, it turned out that Georgia­n Dream could get not 48.2, but 41.7% in the parliamentary elections. Let us remind you that based on the fakes of ISF­ED, Nika Gvaramia tried to paint the 41% result of Georgia­n Dream presented in this exit poll as the real result of the election. Later, it was determined that the rate of negative imbalance was not even 1 percent, however, ISF­ED has not admitted this falsity until now.

“Also, the Ambassador’s statement about the clip of political content distributed by the youth organization of the UN­M – Shame Movement, for which the TV stations belonging to the National ­Movement were fined, was completely surprising. As it is known, it is forbidden to place political advertisements on televisions during the non-election period. The clip of Shame was both political and revolutionary in its content. When you object to the legitimate fines of TV stations for such a clip, it proves once again that the revolutionary scenario is thought up and organized by the Embassy. Again, many thanks to Ms. Degnan for the testimonial.

“When the Ambassador protests the legitimate fines of television stations for the illegal political-revolutionary clip of Shame, protects the PVT falsifying NGO, questions the domestic and foreign legitimacy of the Georgian government, and repeatedly blatantly lies to support this doubt, it is completely clear what we are dealing with. The Embassy cannot stand the sovereign government of Georgia, which does not push the country towards war. We have no doubt that the Embassy will do everything to overthrow such a government and will even go for much more difficult steps than this PVT forgery.

“However, we are sure that the power of the people equipped with truth will firmly protect the country’s sovereignty and will not give anyone the opportunity to bring chaos to the country and drag it into war,” the statement reads.