From Seeds to This: Etseri, Svaneti 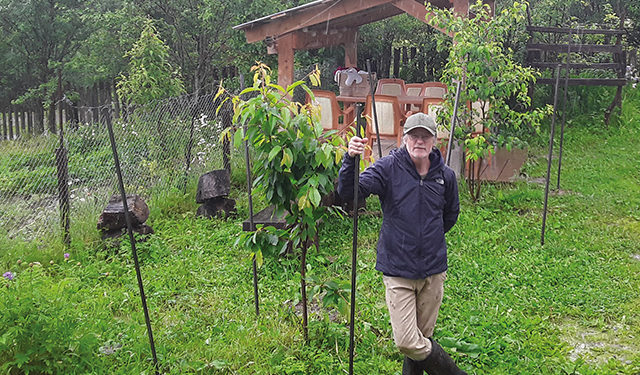 The seedlings for apples, cherries and pears kindly given to us by a friend in Agara a few years ago have now outgrown their cow-protection cages of hollow steel bars and barbed wire. Without these, a single bovine incursion could have seen them decimated, eaten down to stumps which, if they survived at all, would then take a year or more to regrow to their previous healthy state. And the cows will go straight for them, given the chance and not knowing any better! (Although any cow which does enter my land unlawfully I do my best to teach pain, getting in one or two good thwacks on their hide with a stout stick before they run out again. No actual injury, just the murder in my eyes). So, even with land all fenced in, you guard the seedlings as best you can until they are too tall for the cows to destroy.

Time now to replace these cages with something bigger and higher to suit this new seedling size. I bought new 3m bars some months ago in Zugdidi, the nearest source for such things. The old ones I have taken out, along with the troublesome barbed wire coils which perversely catch on everything they can—skin, clothing, each other, the ground itself. The alternative style to all this metal is mostly wood: pointy-ended posts of tough and long-lasting oak, though not the huge thick ones used for long fences, and slats either nailed horizontally to them or fixed vertically between them with two double strands of wire, near top and bottom of the slats. I have chosen my way because it’s much easier for a single person to do.

Timing is important too. You need to avoid both the winter (ground frozen solid) and summer-fall (ground baked hard by the sun). Spring, when rain is still frequent and the clayey ground softer for making holes in, is ideal.

I use a solid straight steel bar about as tall as I am, end pointed, for the holes, plunging it into the ground and pulling it back and forth and in circles to make a cone shape in the ground. If I encounter a rock, which is a common thing here, I have to make a new hole nearby and hope for the best, unable to see how big the rock might be. I have cut the fence-bars to the right length with my rotary disc cutter. Then I set up a small stepladder and, using my axe head, pound each bar into the ground.

Next, I fill the rest of the hole with some dirt, adding a bit of water to soften it further, and pound this as hard as I can with an old axe handle. It will soon dry hard and help the bars to stay in place. I bend each bar slightly outwards for the shape of the tree. Then I’ll wait at least a day, depending on the weather (raining again as I wrote this, but sun forecast soon) for everything to set before replacing the barbed wire. I add twists to the wire in places with my pliers to tighten it up, and now we have a nice environment inside which each tree can continue its growth.

Some of the seedlings are now taller than I am, and already flowered this year, so we’ll see a bit of fruit from them. But it’s really a years-long project. Eventually that fruit-bearing season in their lives will start, and we’ll have plenty to make things from: liqueurs, jams, chutneys, compotes, dried fruit and more, to get us through the winters. That’s what this is all for.