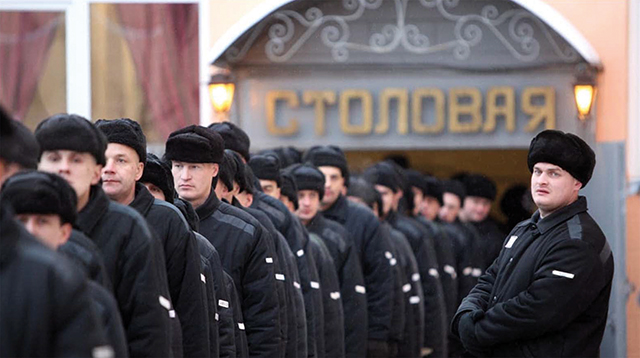 Russian convicts in formation at a penitentiary. Source: AFP via Getty

As casualties continue to mount in Russia’s seventh month of its “special military operation” in Ukraine, finding willing fighters has become difficult. With much of the potential talent pool dead, wounded, or having left the country outright, the Kremlin is turning to unique avenues to find soldiers. Russian President Vladimir Putin has issued a decree to rectify this situation, but prior to this, other sources were already being tapped into.

The Russian prison system is full of the country’s worst. With a meteoric rise in drug-related crime since the early 2000s, it has been filled with violent gang members and addicts. With the system far from focused on rehabilitation, it houses these offenders in Spartan, Soviet-style blocks with little to no view into the real world.

However, one man has decided to change this. With Russia’s defense minister admitting that the military had lost 5,937 service members, and foreign intelligence pointing to double or triple that number, one of Putin’s closest friends has decided to reach out to the country’s lost, imprisoned souls. This individual has an interesting and sordid history with the defense industry, inside and out of the Russian Federation.

Yevgeny Prigozhin is known commonly as “Putin’s Chef” due to his former business dealings with the Kremlin. He was the head of a large restaurant and catering conglomerate that serviced Putin’s lavish parties and dinners, where foreign dignitaries and royalty were present. In a recent admission, he said he was the one responsible for founding the infamous paramilitary group “Wagner.” Stylized as a private military company, or PMC, he led them on missions in Africa, Syria, Latin America, and Ukraine.

In each of these theaters, reports of brutal war crimes and extrajudicial killings would abound. It wasn’t until their operations in Syria that the recruitment call extended Prigozhin’s envisioned model of former special operations veterans and delved into the criminal underworld. To fill his ranks, he needed to find the hardest of souls, men that wouldn’t question their lieutenant’s horrific orders.

The brutal urban fighting in cities across northern Syria required men with hearts of steel and little to no conscience. Killing up close, personally, and repeatedly was a job description requirement. Prigozhin found his prime candidates in the dark, dank cells of Russia’s penitentiary system. Despite their performance, they proved themselves to be the type of fighting force he desired.

In the ongoing fighting in eastern Ukraine, the need for fighters that had no alternative in life became invaluable. Ukrainian resistance, steeled by a massive influx of Western arms, training, and intelligence, had rendered Russian advances ineffective. However, the “Chef” knew strength of arms and numbers could still take ground.

An independent Russian news outlet got a peek into the “Chef’s offer” from a family member of one of the first recruits of Prizhogin’s “assault units.”

“They told my relative, ‘It’s very hard to find the Nazis there, and they are very well-prepared. You will be at the forefront in helping to detect Nazis, so not everyone will return,’” the interviewee said. “At first they said about 20% would come back. Then, that ‘almost nobody will return.’ Those who survive are promised 200,000 Rubles and amnesty. And if someone dies, they promise to pay their family 5 million Rubles. This is all only in words, nothing is fixed on paper.”

Men virtually press-ganged into brutally rigorous service with little to no hope of seeing the free world again. While difficult to fathom for any Western analyst or observer, another video interview account only solidifies this.

A captured former member of Prizhogin’s fighters sheds interesting light on why these units operate with such insensitivity. After being sent to prison to serve a 24-year sentence, he was transferred to a special penitentiary. It was during his stay there that he met Prigozhin himself, sporting a “Hero of the Russian Federation” medal.

After landing in the prison yard in a helicopter, Prigozhin began recruiting the men for service in Ukraine.

Promising amnesty from their criminal charges, a 100,000 Ruble ($1,727.12 at the time of writing) salary, and 5 million Ruble ($86,355.80) for the family upon death, the deal was open to any convict. Concluding by saying the “Motherland is in danger,” Prigozhin left for a month to let the men think.

Upon his return, 92 convicts took him up on the offer. On August 25, the man whose relative spoke out above, and his compatriots, became the newest recruits of the Wagner private military corporation. After taking a plane to the southern city of Rostov, the man and his company took a helicopter to the Luhansk People’s Republic in Ukraine to begin their training.

Their training was rudimentary, at best. Basic loading and firing drills with their new AK-series rifles, as well as the issuance of their helmets, vests and knee pads. Any mistake, such as talking back to the instructors or rude remarks, the candidate would be “nullified.” This euphemism meant that any step outside the strictly observed lines of conduct would get one shot and be buried by a “special department” at the training camp.

Interestingly, the man states that for the majority of their time in the training camp, they were without ammunition for their rifles, possibly alluding to a lack of trust despite the men being in a war zone. During an inspection of the camp by Prigozhin, all weapons were taken away from the men and stored under lock and key in a separate room.

For a week of training, the man was assigned to the 7th Assault Unit, a unit type he described as “cannon fodder.” On September 2, his unit was assigned to move forward to a small town near the front. His first assignment, along with that of several of his comrades, was to retrieve the dead during the night.

After transferring to an orchard with a fortified position, the man was again assigned to a team gathering the dead. It was at this point he deserted his unit after seeing internet videos of the Freedom of Russia Legion. While this ending may seem more for the benefit of his captors, it is the core of the story that lends itself to examination.

According to the man, Wagner was, and still is, recruiting men from the penitentiary system to fight on the front line. He explains that the recruits are not filtered by the crimes they commit, mentioning the large number of narcotics users and addicts that fill Wagner’s ranks. As such, the state of these fighting men is likely to be sub-par.

Russia’s attempt to swell its ranks with fighters in a desperate attempt to hold territory may introduce a horrifying new face in the war. With most Western militaries, there is a significant vetting procedure to increase the professionalism and morality of the soldiers that fight wars. Russia seems to have abandoned this method in order to bolster the defenses of their crumbling front.

These men, with little to lose and a shattered moral compass, are more prone to war crimes, acting outside the command of their superiors, and deserting outright. While the phrase “quantity has a quality all its own” has proven true, it’s unlikely to change the highly kinetic front in Ukraine. Kyiv’s forces have already shown their tactical prowess and ability to out-maneuver Russian troops. The admission of convicts reveals more than the Kremlin is likely to say on their own.