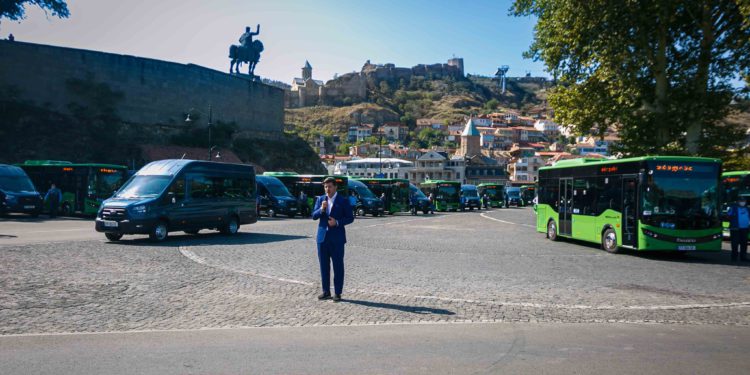 35 new 8-meter buses are to start operating in Tbilisi from 23 September. Procured within the Municipal Fleet Renewal Project, a number of the 180 ISUZU 8-meter buses and 300 Ford minibuses are already in Tbilisi, reports Tbilisi City Hall.

The mayor of the capital Kakha Kaladze presented the new public transport to the population of Tbilisi today.

“Today, 35 units have arrived and will serve the population of Tbilisi from the day after tomorrow. The rest will be fully delivered by February. Next year, we plan to purchase 200 units of 18-meter buses that will run on specific routes. Obviously, this decision was made due to the narrowness of the streets. It will be impossible to move the 18-meter bus on all the streets and there are special lines where they will run,” said the Tbilisi Mayor.

Kaladze noted the new minibuses will run on the streets where it is inconvenient for buses to move. He added they have also started updating the minibuses. Kaladze said the so-called yellow minibuses will be replaced by the end of the year with new buses.

From September 23, the first batch of new buses will replace №67 and №101 buses, while on №7, №42, and №60 their number will increase and the waiting time will be reduced to 15 minutes.