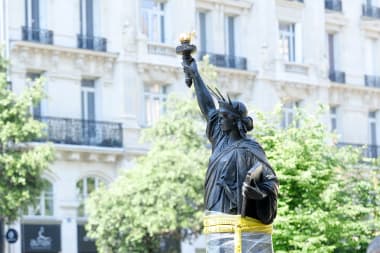 The French government has sent a second Statue of Liberty to the US for the country’s Independence Day on July 4, as a symbol of friendship and partnership between the two countries.

The Statue of Liberty in New York will soon have a little sibling – a new bronze statue called “little sister,” which is 2 meters and 83 centimeters high, about 16 times smaller than the original Statue of Liberty. Little Sister has been installed at the National Museum of Arts and Crafts (CNAM) in central Paris since 2011 and is an exact replica of the original national monument sent by the French government 135 years ago.

In 1886, France gifted a 92-meter statue of liberty, nicknamed Lady Liberty, as a token of friendship with America.

“We want to send a very simple message: Our friendship with the United States is very important, especially at this moment. We have to conserve and defend our friendship,” said Olivier Faron, general administrator of the CNAM.

Little sister will be erected on Ellis Island, just across the water from the original, from July 1 to July 5.