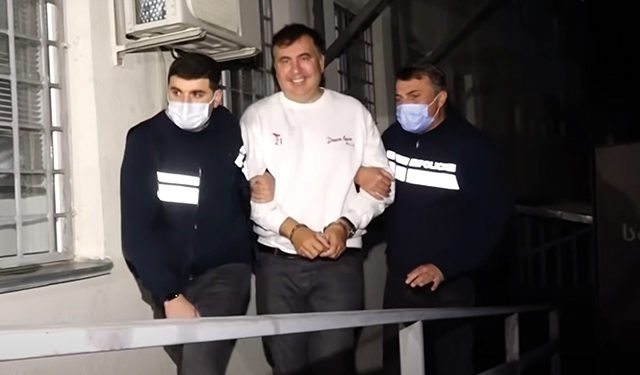 On September 28, former President of Georgia Mikheil Saakashvili posted a photo of his planned Kyiv-Tbilisi flight on his Facebook page. The flight was scheduled for October 2, the day of the local self-government elections in the country. After many times promising and announcing that he would be returning from Ukraine to his homeland, the convicted former president finally presented proof of his intentions, aiming to encourage his supporters prior to the elections.

The local authorities responded immediately, noting that Saakashvili would be detained as soon as he crossed the Georgian border, his having been sentenced to imprisonment in absentia due to his connection with the case of Sandro Girgvliani and the beating of MP Valeri Gelashvili.

However, as it turned out, “Misha” had other plans. To everyone’s surprise, on the morning of October 1, Saakashvili wrote on Facebook that he had already arrived in Georgia. He also released a video recorded in Georgia’s seaside city of Batumi, telling the population that he had finally come home after eight years away. Later, he released another video to prove that he was actually in Georgia. Despite this, the fact of his return was categorically denied by both intelligence services and government representatives.

“Saakashvili has not crossed the Georgian border,” the police, the State Security Service, and the local authorities assured the population. Later, following Saakashvili’s arrest, the authorities changed their rhetoric, saying that denying his presence in the country was “part of the special operation aimed at catching him.”

Finally, after he gave the police almost all the information they needed of his whereabouts through video recordings, Saakashvili was arrested in a private apartment in Tbilisi. He was then transferred to Rustavi prison, where he was captured on camera smiling and looking confident.

“I would like to inform the public that the wanted third President of Georgia, Mikheil Saakashvili, has been arrested,” said Georgian Prime Minister Irakli Garibashvili at a briefing on the evening of October 1.
Just before the arrest, Saakashvili addressed his supporters via his Facebook page.

“Do not be afraid of anything. You are going to the polls tomorrow. Vote, and we will all celebrate victory together,” he told the public.

Notably, his return significantly motivated the supporters of the UNM, which led to the party receiving important support in the October 2 elections. According to the Central Election Commission, the ruling Georgian Dream party won the majority of votes, 821,225 (46.65%), while the United National Movement was not too far behind with 540,469 votes (30.7%).

The Fallout of Saakashvili’s Return
Police this week arrested three persons for “covering a crime” and helping Saakashvili to cross the Georgian border and travel from Batumi to Tbilisi: the owner of the flat where he was arrested, Elguja Tsomaia, who reportedly also helped him cross the border; and father and son Zurab and Shalva Tsotsoria, employees of Poti Port Terminal.

Lawyers of the detainees say the accusation is groundless because the criminal code does not include such a crime, and the fact that the accused did not inform the police about Saakashvili’s entry into Georgia does not mean that they did not report the crime. All three are still in pre-trial detention at time of writing.

Saakashvili, who has said he considers himself a political prisoner, on the day of his detainment declared a hunger strike and, as a Ukrainian citizen, requested a meeting with the Ukrainian Consul. The former president has been on hunger strike for a week now. He announced that when his condition worsens, he will refuse any medical intervention.

Members and supporters of the UNM have been holding rallies outside Rustavi Prison daily since his arrest, demanding his release.

Foreign partners of Georgia assessed Saakashvili’s arrest as a “test for Georgia’s judiciary,” while the President of Ukraine, Volodymyr Zelensky, announced concerns and promised to get him back to Ukraine.

“As the President of Ukraine, I am engaged in trying to bring Ukrainian citizens home with the various opportunities that I have, and which were given to me by the authorities. Saakashvili is a citizen of Ukraine, so this concerns him as well,” Zelensky said.

Saakashvili wrote a letter of thanks in response, noting that he is now Putin’s prisoner.

“I love my Georgia more than my life, but I love Ukraine, my second homeland, where I spent many years of my life and where I have family and friends, and where I have citizenship that I appreciate very much. All my life I have been proud to have the opportunity to make a modest contribution to the historical changes and reforms you have made. Since I am in fact a personal prisoner of Putin, I very much appreciate your principled position on the protection of all prisoners in Ukraine, in the whole region, and the empire,” the letter to the Ukrainian President read.

GARIBASHVILI VS SAAKASHVILI
On October 6, Prime Minister of Georgia, Irakli Garibashvili, published a letter about the motives of Mikheil Saakashvili’s arrival, and his arrest.

In it, he noted that “some people think the motivation was a thirst for power, selfishness, and jealousy about the other leaders of the United National Movement, and that he deliberately went to jail to get attention. Some think that he returned with the intention of overthrowing the government, which he was deeply convinced of the success of. Some say it was difficult to calculate the consequences of his decision due to his drug addiction,” the PM wrote, noting that he considers it “absurd” that Saakashvili deliberately went to jail, and that, in his place, he would not come back to the country in violation of the law, but would bravely come back and go to prison. He points out in his letter that blaming illogical decisions on drugs is also absurd. “No matter how addicted a person is, he always had enough time to change an illogical decision,” he wrote.

“Consequently, the most logical explanation is that Saakashvili came to Georgia not with the intention of going to prison, but with a strong hope of collapsing the government,” the Prime Minister said, going on to highlight that Saakashvili’s revolutionary intentions were “doomed to failure.”

“Instead of a collapsed state, Saakashvili found a well-organized state system in Georgia. All this explains the radical change in Saakashvili’s mental state before and after his imprisonment – he entered the prison with a smile and now he has nothing to worry about but how to get out of prison,” reads the letter.

In response to the above, Mikheil Saakashvili’s lawyer, Beka Basilaia, said after meeting with him, that the former president of Georgia is ready to take a drug test at the penitentiary institution.

“We have seen Mikheil Saakashvili riding a bicycle, we have seen him swimming, we have seen him on skis, he has lived a very healthy lifestyle – he was running, training, etc. We are ready, in front of TV cameras, not in Vienna, not in Samkharauli clinic, but in this institution, to take a test for any drug – starting with light drugs, ending with chemical drugs,” Basilaia told the press, added that, “at the same time, we will challenge Garibashvili to also take a drugs test, in the Chancellery, in the presence of the media acceptable to him, and after that, we will hear what he has to say.”

Ian Kelly, former US Ambassador to Georgia in 2015-2018, responded to the current events in Georgia via Twitter, expressing concern at Garibashvili’s letter regarding the return of Former President.

“Both are a poison in the body politic. As are all politicians, including in my country, who choose conflict and personal power over national interests,” Kelly tweeted.

The International Response to Saakashvili’s Arrest
US Ambassador to Georgia Kelly Degnan stated that Saakashvili’s case is to be a test of the Georgian judiciary, and added that they will monitor whether the case is conducted impartially, as they hope.

“We are aware of the reports of the detention of Mr. Saakashvili and we’re following developments very closely. We urge Georgian authorities to ensure that Mr. Saakashvili is afforded fair treatment in accordance with Georgian law and Georgia’s international human rights commitments and obligations,” stated the spokesman of the US State Department Ned Price at a press conference.

Among other foreigner supporters and friends of Georgia, the European People’s Party also responded to Saakashvili’s arrest. Their statement notes that the arrest and political persecution of the former President of Georgia further increases the tensions and political polarization within the country.

“The EPP calls on the Georgian government to improve the political environment, to guarantee free and fair elections in the second round, and to stop the persecution of political opponents. We will closely monitor the second round, where the fate of the big cities will be decided.”

Foreign media, including the BBC and Forbes, has responded to the latest events in the country.
Forbes published an article, entitled “What Just Happened In Tbilisi Will Affect All of You,” written by journalist Melik Kaylan.

“The only chance at full-scale change and return of optimism, like it or not, is in the person of Saakashvili. He is not the most popular or politically flawless figure, but he is the bravest, packs the most experience at seizing the moment and overturning the odds. The last time the world cared about Georgia was during his tenure because he realized that only global attention could stave off Moscow’s bullying. He deliberately made himself a high profile figure abroad – in the US, in France, around Europe and beyond,” notes the author.

“Georgia’s former President Mikheil Saakashvili has been arrested on his return from exile. Footage broadcast on Georgian television showed the former president in handcuffs and smiling as officers led him away,” reported the BBC. “Despite being abroad for eight years, the former president is still widely seen as a leading opposition figure and has called on supporters to rally in the capital Tbilisi,” reads the article.

SAAKASHVILI’S NEW FAMILY
Notably, it has also been revealed that there are changes in the private life of the former President of Georgia – he has a new family after breaking up with Dutch wife Sandra Roelofs. He informed the public about it together with his partner, Ukrainian politician Lisa Yasko, in a video Yasko posted on Facebook on October 1, after Saakashvili was arrested. Following his arrest, Yasko came to Georgia and visited him in prison.

The above announcement was as much a surprise to the former First Lady of Georgia, Sandra Roelofs, as it was to the rest of the world.

“Many confused friends and comrades are asking me about my private life. I will not hide from you that the content of the video released on Friday evening was unexpected to me, and the form was completely unacceptable. Despite my personal emotions, I remain calm and believe that we will emerge victorious from this battle,” Roelofs wrote on Facebook.

Sandra says Saakashvili is a political prisoner and as a citizen of Georgia she fully joins the demand for his release.