Foreign Policy: Georgia Turns Its Back on the West 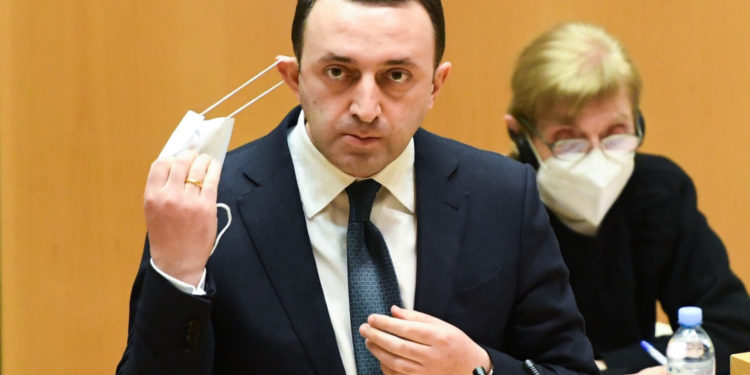 Georgian newly appointed Prime Minister Irakli Garibashvili takes off his protective facemask before delivering a speech during a parliamentary hearing, prior to the MP's vote to approve the new government, at the Georgian Parliament, in Tbilisi, on February 22, 2021. (Photo by Vano SHLAMOV / AFP) (Photo by VANO SHLAMOV/AFP via Getty Images)

The ruling party Georgian Dream appears to be strengthening its ties to Russia and even Belarus, reads the article published at Foreign Policy, written by Ian Kelly, US Ambassador to Georgia from 2015 to 2018, and David J. Kramer, a senior fellow at Florida International University’s Steven J. Green School of International and Public Affairs.

The article notes that for decades, Georgia has been the most pro-Western and pro-American country in the region. Its top foreign-policy priority is to join the European Union and NATO, and it has answered nearly every call from both organizations to serve in peacekeeping and combat missions.

“Several dozen Georgians made the ultimate sacrifice while serving side by side with US troops in Iraq and Afghanistan. In addition to serving as a security asset for the United States, Georgia is strategically important as the Black Sea outlet of the only economically viable East-West trade route that does not transit Russia or Iran.

“Keen to join the Euro-Atlantic community, Georgia has also stood out in its region for having made the most progress toward democracy. That progress is now threatened by the ruling party, Georgian Dream, which seems more intent on seizing all reins of power than on meeting Western standards of governance. It also appears to be strengthening its ties to Russia and even Belarus,” reads the article, thus resonding to the recent agreement between the state security services of Georgia and Belarus.

The authors of the OP-ED note that in 2019, Georgian Dream leaders invited a Russian lawmaker to address the Georgian legislature, leading to outrage and unrest in the streets. It torpedoed two projects that would have increased Georgia’s independence from Russia, one a deep-water port on the Black Sea and the other a new East-West corridor of fiber optic cable.

“Some in Georgian Dream are carrying out what amounts to state capture, concentrating power and wealth in the hands of a small group of elites, at a time when the coronavirus pandemic is raging in the country  and hurting the economy, with GDP dropping by 6.2 percent last year. Georgia has recorded a half million cases and more than 6,500 dead, a positivity rate of 10.4 percent, and only seven percent of the population is fully vaccinated,” they point out.

“Borrowing a page from the playbook of illiberal regimes like those in Moscow and Minsk, Tbilisi has also begun lashing out at the West. In late 2019, Facebook removed fake accounts, all traced to Georgian Dream, that expressed anti-Western sentiments, some of which were specifically anti-American. More recently, websites and social media accounts linked to Georgian Dream have launched unprecedented attacks on the U.S. ambassador in Tbilisi and her European colleagues any time they have voiced criticism of Georgian Dream or the government, in an effort to silence such criticism,” reads the article.

Due to high public interest, the Georgian State Security Service has also responded to the mentioned agreement with Belarus, saying:

“Cooperation Agreement between the State Security Service of Georgia and The State Security Committee of the Republic of Belarus“ was signed in 2016. Following the signing of the Agreement, the Government of Georgia made all the steps within the respective terms to ensure entry into force of the document, while the Republic of Belarus put the document signed in 2016 into force in August of the current year and made this information available via media.

“The Agreement intents on cooperation between the parties in the fields of fight against terrorism, corruption as well as other international and transnational organized crimes committed against state security.

“The state, in accordance to its interests, voluntarily exchanges the information in the direction of fight against crime, hence, this Agreement does not oblige the parties to carry out an act which is against their state interests.

“The State Security Service of Georgia has got law-enforcement cooperation of the similar type with multiple partner countries worldwide, including with the United States of America, the UK, France, Lithuania and other NATO and EU-member countries.

“Disinformation campaign launched in relation to this matter reaffirms that the State Security Service of Georgia is being deliberately discredited. Using of the international agreement in the process of campaign to discredit security and law-enforcement agencies of the country, raise particular concern since it may damage Georgia’s state interests.”