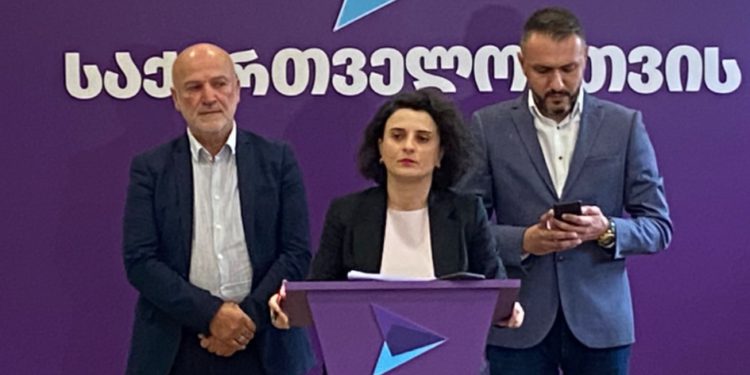 The party For Georgia, founded by Former Prime Minister Giorgi Gakharia, names more cases of pressure and discrimination due to political views against its members and supporters by the ruling party Georgian Dream and demands timely investigation.

“The ruling party Georgian Dream has invented a new method of politically motivated persecution – pressure upon dozens of already registered For Georgia’s candidates for withdrawal of their candidacies. Apparently, the goal is the annulment of the election list in certain districts,” Deputy Chairman of the Political Council Natia Mezvrishvili announced at a special briefing.

The ruling party @GeorgianDream41 has invented new method of politically motivated persecution – pressure upon dozens of already registered #ForGeorgia’s candidates for withdrawal of their candidacies. Apparently the goal is the annulment of election list in certain districts.

“Government-backed pressure on For Georgia’s candidates for withdrawal of their candidacies has gained an alarming nature. If it continues, the party is at risk of annulment of the election list in certain districts,” she warned later.

Mezvrishvili noted that despite several briefings held by her in recent days with concrete examples of violations and pressure, the law enforcement agencies haven’t responded and investigation hasn’t been launched.

“We call on the authorities to free the Prosecutor’s Office and the MIA from the political influence, as these two agencies are obliged to respond and act in accordance with the law. In turn, we call on these agencies to start an immediate investigation into all cases of political discrimination named by us,” she pointed out.

Mezvrishvili added that Georgia’s foreign partners, including ODIHR Mission, have been informed regarding the above violations and despite such pressure, the party will continue to fight for victory in upcoming elections.

At a briefing, she named several more cases of the party’s candidates withdrawing their candidacies as a result of a political prosecution, including in Akhalkalaki, Ninotsminda, Lagodekhi, Adigeni, Ozurgeti, Telavi, etc.

“Unfortunately, law enforcement agencies are actively used in this process and this trend is observed.

“Vartan Cholakhiani, the candidate of Akhalkalaki Assembly, withdrew his candidacy due to pressure from the SSSG; Hovhannes Ovsepiani, a majoritarian candidate of the village of Heshkia in Ninotsminda district, whose wife was blackmailed by creating problems at work, withdrew his candidacy; Gevork Babertsyan, Chief of Operational Staff in Ninotsminda, filed an application for resignation following the pressure due to party activities and was fired. There were two more cases of withdrawal of candidacies in Akhalkalaki – Reesh Kazarian and Lauren Rezoyan, as well as Mahman Mammadov, the former majoritarian candidate in Kabali village of Lagodekhi district and number 11 on the list. Adigeni District Majoritarian and Proportional List Candidate, Koba Gelashvili, was threatened with the dismissal of his family members from work and this person also withdrew his candidacy. Nona Tunadze, the majoritarian candidate in Nasakirali, Ozurgeti district, withdrew her candidacy with the active involvement and pressure of brothers Archil and Avtandil Talakvadze.  In the village of Karajala in the Telavi district, Novruz Gochaidatoghli was threatened with pressure and harassment on business and withdrew his candidacy,” Mezvrishvili said.

“There are dozens of such cases. Unfortunately, the law enforcement agencies do not respond and we provide more detailed information to those who respond. This is now a systemic process in Akhalkalaki and in general in the Samtskhe-Javakheti region, Guria, Marneuli, Kakheti, and, practically, all over Georgia,” she added.

Notably, a few days ago, the Public Defender’s Office of Georgia announced that 62 employees were subjected to various forms of pressure recently. Most of them, in a conversation with the representatives of the Public Defender, confirmed pressure and dismissal and explained the above by kinship, friendship or good relations with members of the party of former Prime Minister Giorgi Gakharia.

The mentioned individuals were fired from the Ministry of Internal Affairs, municipal services, non-commercial legal entities as well as legal entities under public law established by various municipalities, and other public institutions.

Citizens allege that their superiors told them to file applications for resignation, which some agreed to and some did not, although the latter were dismissed anyway, on other grounds. Disciplinary proceedings were launched against some of them.

Program of Kartvelology to be Launched at Harvard University