Fathers’ School Opened in Kutaisi as Part of the “MenCare” Campaign 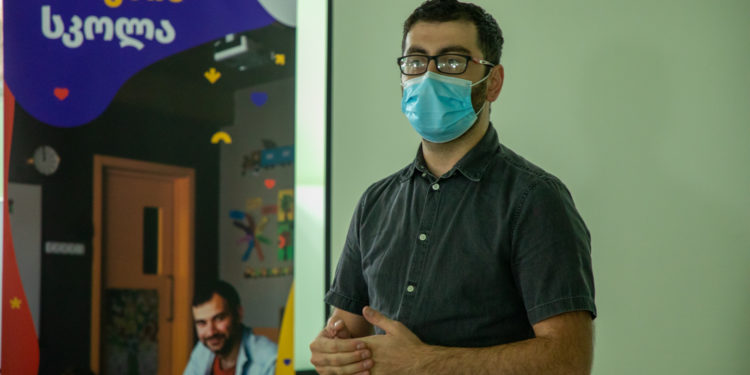 On September 25, a Fathers’ School was opened in Kutaisi as part of the MenCare Campaign, at the initiative of the United Nations Population Fund (UNFPA) Georgia Country Office and the NGO “Care Together”.

The goal of the school is to promote the development of the skills and behaviors among men which will help them to become more engaged and caring fathers and partners. The Fathers’ School program will also help men learn more about gender equality, as well as about stereotypes and harmful social norms that hamper the efforts of achieving genuine equality.

Davit Tsomaia, 38, who became a father at the beginning of September, travels from Baghdati to attend the Fathers’ School. One of the things that interests him is to learn how to calm a crying baby.

“[I do not want] to miss any details, either health-related or related to maintaining safety during the pandemic,” he says.

According to the facilitator of Fathers’ School, Ramaz Chichinadze, the school will help fathers better understand what fatherhood is, how to be good fathers, how to maintain healthy family relationships, and how to share responsibilities for children with their spouses.

“The UNFPA Georgia Country Office has been actively working for years and has put much effort in ensuring that as many fathers as possible are actively involved in the upbringing of their children, in our country. It is extremely important that men share the responsibilities for childcare and household chores equally with women, because such changes, changes that free people from harmful social norms and stereotypes, form the basis for building a healthy society,” Lela Bakradze, Head of the UNFPA Georgia Country Office says.

One of the first partners of the Fathers’ School program in Kutaisi is the women’s health center “HERA”.

“We are ready to support the Fathers’ School program because the role of man as a caring partner and father is very important in the antenatal as well as postnatal periods. In addition, promoting innovative initiatives in the Imereti region is a priority for HERA,” its Director Marika Davituliani says.

The benefits of fathers’ active involvement in childcare and upbringing have been proven by numerous studies – the children are much happier, distinguished by physical and mental health, have high academic achievements, better social skills, higher self-esteem, less behavioral problems and increased stress resistance.

Fathers’ School was established within the framework of the “EU 4 Gender Equality: Together against gender stereotypes and gender-based violence” program, funded by the European Union, implemented jointly by UN Women and UNFPA.

The program seeks to tackle gender stereotypes and discriminatory norms, ensure equal rights and opportunities for women and men, and active involvement of men in the process of promoting gender equality.