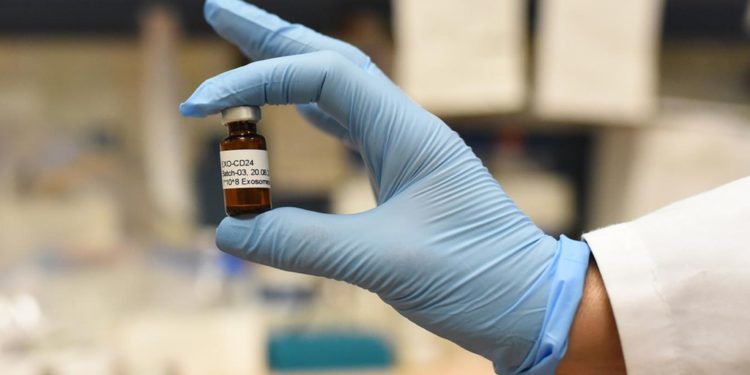 “The experimental drug has given new hope to the healthcare sector worldwide.” Professor Nadir Arber

Leading scientists and researchers worldwide are carrying out dedicated and selfless work to find a treatment that’s safe and effective against serious cases of coronavirus.

However, Israel, as a country traditionally well-known for its great achievements in the medical field, this time again emerges to be the creator of one of the effective medicines against COVID-19, hailed as a “medical breakthrough.”

On Thursday, February 17, the Israeli doctors of Ichilov Hospital, which was entrusted with developing the treatment, held an online briefing regarding the innovative drug against coronavirus, EXO-CD24, showing 96% efficacy, as proven by initial studies.

The briefing was presented by Prof. Nadir Arber,  Director of the Integrated Cancer Prevention Center, and Dr. Shiran Shapira,  Head of the Laboratory for Molecular Biology at the Center for Cancer Diagnosis and Prevention at Ichilov Hospital.

Notably, the new medicine was initially developed as a treatment strategy for cancer, however, it turned out to be quite effective against COVID after being experimentally tested on patients hospitalized with moderate or serious coronavirus complications.

During the online presentation on the new and effective medicine, the researchers noted that EXO-CD24 is an innovative compound based on enriched CD24 exosomes, and is inhaled directly into the lungs to eradicate the cytokine storm that results from the COVID-19 virus.

“The preparation is given by inhalation, once a day, for only a few minutes, for five days,” Professor Arber said.

“The preparation is directed straight to the heart of the storm, the lungs, so unlike other formulas which selectively restrain a certain cytokine, or operate widely but cause many serious side effects, EXO-CD24 is administered locally, works broadly and without side effects,” he added.

The doctors pointed out that while average COVID-19 patients make a recovery in three-four weeks, the drug helped all the 30 patients in the sample group make a full recovery from the virus in just 4 days.

“Of 30 patients aged between 37 and 78, all but one recovered quickly and they were discharged after 4 days on average,” Arber said, adding that the treatment was stopped for one patient who was admitted to the intensive care unit, but she ultimately recovered.

Arber also said that the experimental drug has given “new hope to the healthcare sector worldwide.”

As announced by the doctors of Ichilov Hospital during the online briefing, the new drug has a lot of advantages compared to other existing solutions against COVID-19, in particular, it is efficient, easy to produce, low cost, low concentration (compared to the intravenous administration approach), and doesn’t have side effects so far. What also makes the drug rather interesting is that apart from its being low cost, EXO-CD24 is easy to use. Israeli scientists currently involved in the study of the medicine note that the drug EXO-CD24 has to be administered only 5 days in a row.

The doctors explained that the medicine fights the cytokine storm — a potentially lethal immune overreaction to the coronavirus infection that is believed to be responsible for much of the deaths associated with the disease.

Based on studies, the drug uses exosomes, tiny carrier sacs that shuttle materials between cells, to deliver a protein called CD24 to the lungs, which helps regulate immune functioning to the lungs.

“This protein is located on the surface of cells and has a well-known and important role in regulating the immune system,” said Dr. Shapira.

She pointed out that the protein helps calm down the immune system and curb the storm.

After the completion of phase 2 and 3 trials, if the results will be as promising as they were during phase 1, the medicine will be officially approved as a treatment against the disease, and various countries in need worldwide will be able to request it.

Brazilian President Jair Bolsonaro, amid the particularly grave epidemiological situation in the country, already announced his government would seek emergency use authorization for an Israeli-developed drug against COVID-19 that Prime Minister Benjamin Netanyahu described as a “miracle” treatment.

It’s not the first time Israel has done such a breakthrough in medicine. Israeli scientists were earlier credited to have developed a unique cancer cure, also the first of its kind.