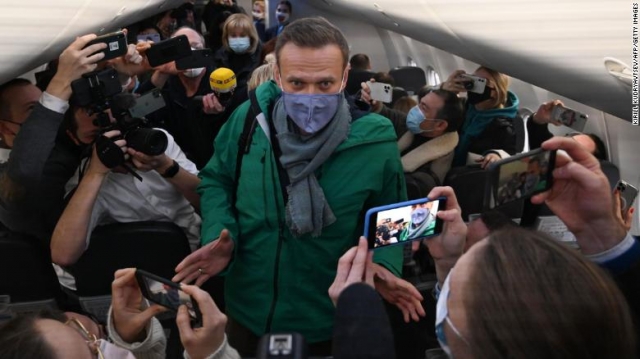 Leaders of the United States and European countries have criticized the arrest of Russian opposition leader Alexei Navalny and called on the Russian authorities to release him.

Alexei Navalny, who returned to Moscow late at night on January 17 after being poisoned with a nerve toxin and months of treatment in Germany, was arrested at the airport. He will spend the period before the trial in solitary confinement.

The anti-corruption campaigner was nearly killed in a poisoning attack in August last year. Navalny, 44, says the poisoning was ordered by Russian President Vladimir Putin. The Kremlin denies any involvement.

Experts in Germany, where Navalny was being treated, concluded that he was poisoned with Soviet-designed nerve toxin Novichok.

Jake Sullivan, an adviser to US President-elect Joe Biden on national security issues, called on the Russian authorities to release Navalny immediately.

“Mr. Navalny should be immediately released, and the perpetrators of the outrageous attack on his life must be held accountable. The Kremlin’s attacks on Mr. Navalny are not just a violation of human rights, but an affront to the Russian people who want their voices heard,” Jake Sullivan wrote on Twitter.

Incumbent Secretary of State Mike Pompeo said the United States condemned the Russian government’s decision to detain Navalny:
“We note with grave concern that his detention is the latest in a series of attempts to silence Navalny and other opposition figures and independent voices who are critical of Russian authorities.”
German Foreign Minister Heiko Maas also said on Monday that Russia should release Alexei Navalny.
“After his convalescence, Alexei Navalny chose consciously and of his own free will to return to Russia because that’s where he feels his personal and political home is. That he was detained on his arrival by Russian authorities is utterly incomprehensible.”

“The detainment of Alexey Navalny upon arrival in Moscow is unacceptable. I call on Russian authorities to immediately release him,” Michel wrote on Twitter.