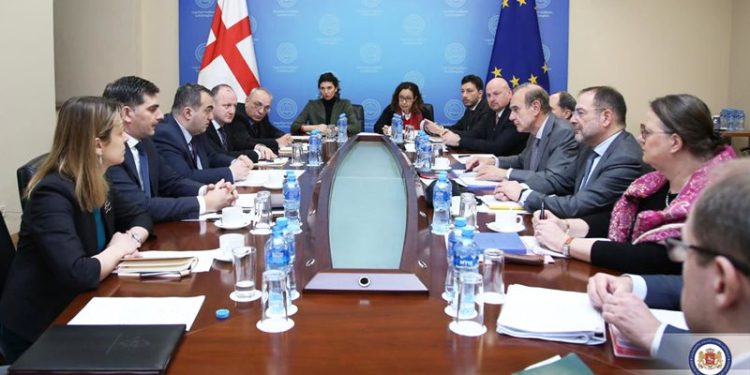 The fifth high-level EU–Georgia Strategic Security Dialogue took place. It reflected the strong level of commitment by both parties to take the cooperation forward, including on foreign and security policy, in line with the EU-Georgia Association Agreement.

The parties highlighted the historic importance of the decision of the European Council of 23 June 2022 to recognzse Georgia’s European perspective.

The participants discussed the consequences of the conflict between Russia and Georgia in August 2008, including the conflict dynamics in the Georgian regions of Abkhazia and Tskhinvali region/South Ossetia. They called upon the Russian Federation to fully implement the EU mediated 12 August 2008 ceasefire Agreement. Both sides stressed the importance of the Geneva International Discussions. They once again highlighted the important role of the EU Monitoring Mission for peace and security in Georgia, and underlined the necessity of ensuring the full implementation of its mandate.

The European Union reaffirmed its unwavering support for Georgia’s sovereignty and territorial integrity within its internationally recognized borders.

The EU and Georgia also exchanged on topical foreign policy issues, security challenges in the South Caucasus and the wider region, including Russia’s military aggression against Ukraine. The sides highlighted the critical importance of increasing connectivity, including in the Black Sea as a mutual priority.

The European Union commended Georgia’s role as an important partner in EU CSDP missions. The sides expressed readiness to continue deepening security cooperation in line with the priorities set out in the EU Strategic Compass as well as addressing the hybrid threats and increasing Georgia’s capacities and resilience, among others through the European Peace Facility.

“The meeting is taking place at a very challenging period in Europe as Russia’s military aggression in Ukraine has significantly changed its security environment, especially in the Black Sea region,” noted First Deputy Foreign Minister Darsalia. “We shared with the EU side the challenges and risks that arise from Russia’s continued occupation of Georgia’s regions. We also had a useful exchange on ways to promote peace and security in the South Caucasus, while at the same time seek possibilities for cooperation in areas of mutual interest and that is enhanced connectivity in the Black Sea. The meeting also served as an important platform to identify next steps towards enhancing our cooperation in the CSDP in line with priorities outlined in the Strategic Compass.”

“Our meeting reconfirmed the shared commitment of the EU and Georgia to the core principles on which European security is built, and our common vision of a peaceful and prosperous South Caucasus region,” said Deputy Secretary-General Enrique Mora, noting that “Georgia remains one of the closest and most important partners of the EU in the region. In current times, where the security context has radically changed because of Russia’s war of aggression against Ukraine, the EU reiterates its firm commitment to support Georgia to achieve peaceful conflict resolution, as well as to contribute to the stabilization of the whole region. To this end, the EU has continued to step up its support in strengthening Georgia’s resilience.”

The meetings of the high-level EU–Georgia Strategic Security Dialogue are held once a year and cover issues of common interest in the field of foreign and security policy.