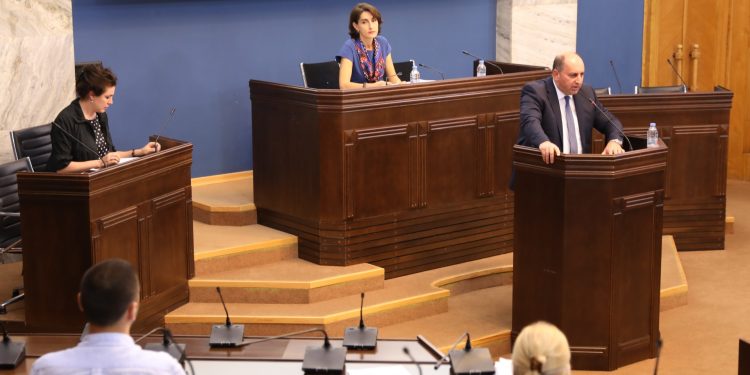 The Committee discussed with the first reading and approved the Bill on Public Procurements.

“On July 22, Georgia opened the EU public procurement market for the companies registered in Georgia, which constituted a significant step to the accession to the European economic area. The submitted legal initiative to a high extent is related to the fulfillment of the EUAA commitments by Georgia and includes some EU directives ensuring the compliance of the national legislation with the EU directives,” the Chair of the Committee, Maka Botchorishvili stated.

The Bill was introduced by the Chair of the State Procurement Agency, Levan Razmadze. “It is a brand new Bill in full conformity with the EU directives since it has been developed in cooperation with our European colleagues,” he stated adding that the Bill changes the system and the approaches, as well as the definition and the platform of a purchaser.

Pursuant to the Decree of the Government, the so-called roadmap has been ratified on the basis of DCFTA, assigning the Agency to fulfill 5 stages. “2 of five stages have already been fulfilled, on the basis of which we opened the European market of provision of goods. The Georgian companies meeting the criterion are eligible to participate in the tenders called by the state agencies and if succeeding, to start the operation,” he noted.

As he noted, the 3rd and 4th phases envisage the adoption of the Bill to gradually open the market for the construction and service spheres. The fulfillment of the EUAA commitments requires the approximation with the EU directives through the developed Bill based on the uniform system and complex aspects. Pursuant to the Bill, the public procurements issues will be drastically changed under the national legislation and providing the EU regulations.

The package also alters the monetary margins and includes a novelty that the procurement specialists shall be subject to the mandatory certification to increase qualification in this sphere and facilitate the employment of the certified specialists. Chapter V of the Bill re-regulates the public procurement procedures.

As the reporter stated, it also includes yet another novelty on the centralized procurements facilitating the availability of economically beneficial proposals for the goods or services to be purchased by the state agencies. The Bill inculcates an approved concept of sustainable public procurement principles and approaches and establishes the terms for the appeal to the Dispute Resolution Council.

The reporter answered the questions and made additional elucidations. The Committee approved the Bill along with 34 accompanying initiatives.