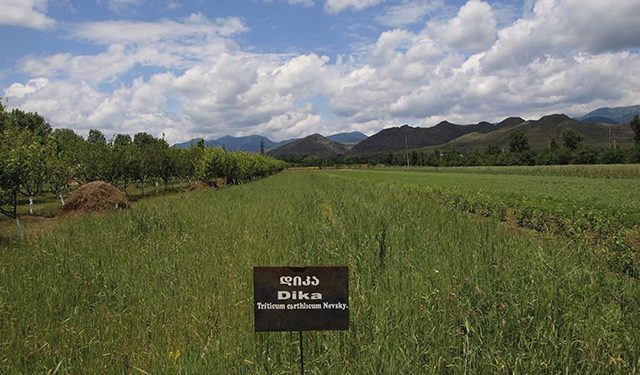 Elkana’s Dika variety of wheat at their farm in the Samtskhe-Javakheti region. Photo by Mike Godwin

Georgia’s re-emerging tourism sector has taken immense steps to recover from the cessation of travel in the past years. With tourism, hospitality, and food service companies taking every available opportunity to seize more market value, others have stepped up to assist the other sectors of the economy. A key component of this has been the agricultural and agrotourism industries.

The Biological Farming Association ‘Elkana; has been working with farmers and agrotourism in Georgia since 1994. Their website boasts the goal of “improvement of the socio – economic condition of the population of Georgia and environmental protection.” While a lofty goal for some, they have taken serious and largely successful steps to support this mission.

One of these initiatives is a grain farm in the southern region of Samtskhe-Javakheti. However, this farm does not operate within the traditional farming model: It serves as a sort of “bank” for farmers to sustainably grow unique and profitable variants of Georgian wheat. Working with farmers to keep these 14 species and 188 varieties of wheat thriving, the farm also keeps varieties of fruits, legumes, and other valuable crops.

Recently, the company hosted partner organizations and government representatives to the farm to showcase their work.

The expansive compound is home to several hectares of wheat, from which they make their own bread using the traditional Georgian ‘tone’ oven. Using these unique varieties of wheat, bread specific to the region is baked using original methods.

We are trying to bring more attention to this area, and to encourage international and local tour operators to visit the region

Additionally, several dishes of traditional Samtskhe-Javakheti cuisine were made, as well as brief classes on the crafting of these items. Of particular note is a special type of bread pastry known as ‘kada.’ This bread is constructed by rolling the dough using a Georgian rolling pin and a floured surface. This dough is then stretched over a rounded surface so as to pull the dough to an almost paper-like thinness. Once at the desired thinness, it is lightly folded into a funnel shape and filled with a mixture of flour, shortening or fat, and salt to create a unique pastry not found in every region of Georgia.

Another dish that made an appearance is the famous khinkali. However, this variant is specific to the region and not commonly eaten in other areas. Known as ‘apokhti khinkali,’ the local khinkali features cured meat in very small cubes. This meat is a traditional method of preserving pork or beef for long periods of time, such as through the harsh winters. These one centimeter cubes of dried meat are tucked into a small envelope of dough to be boiled until tender. While the larger khinkali variants are often consumed in batches of five to ten, these smaller versions are often served up to thirty at a time.

During the event, some of the attendees took time to express their gratitude for Elkana’s work and the continuing project to sustainably keep these ancient wheat varieties thriving.

Florent Tomatis, an Agribusiness and Value Chain Specialist with the United Nations FAO Investment Center, explained the work that his organization, partnered with Elkana, has been focusing on recently.

“We are trying to bring more attention to this area, and to encourage international and local tour operators to visit the region,” he said, speaking to a crowd gathered at the farm.

Local municipal authorities praise the work, stating that the ongoing project has helped bring more tourism, investment, and general interest to the area. The existing wineries, guest houses, and restaurants have been eager and warm in their reception of new visitors as Georgia’s summer tourist season comes into full swing.

Elkana’s efforts, particularly the “grain ark” farm project, brings a unique form of cultural heritage to center stage. Preservation through the promotion, cultivation, and education of these unique variants of Georgian wheat and crops is essential to the protection of the biodiversity of the country as well as the deep-rooted bread-making traditions of the region.