During Meeting with David Zalkaliani, Kelly Degnan Thanked Georgian Government for its Support to Ukraine 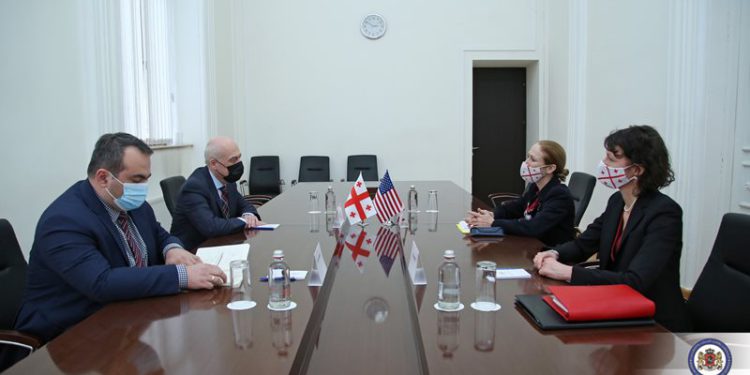 “I again received unwavering support from the United States, our main strategic partner, for Georgia’s European and Euro-Atlantic integration course, and the assessments that followed our statements of support for Ukraine are fully backed and shared by the United States,” he said.

“The United States welcomes Georgia’s clear support for Ukraine,” Kelly Degnan said after meeting with Secretary of State John Kerry. The American diplomat underlined the support of the Georgian government and people of Georgia for Ukraine, including the importance of the humanitarian aid sent to Ukraine, as well as the support the Ukrainian citizens in Georgia. “We should also mention the very generous donations by the Georgian people, the business community and the government, and the humanitarian assistance, as well as the support to Ukrainian citizens, including those here, in Tbilisi, Georgia,” Kelly Degnan said.

The U.S. Ambassador also welcomed the Georgian Foreign Ministry’s clear support for Ukraine in both bilateral and multilateral formats: “We strongly welcome the important statements made by Minister David Zalkaliani and the Foreign Ministry regarding Russia’s aggression, as well as their clear support within the multilateral organizations like the UN, United Nations, the OSCE and the Council of Europe, where Georgia made very important statements of support for the Ukrainian people.”